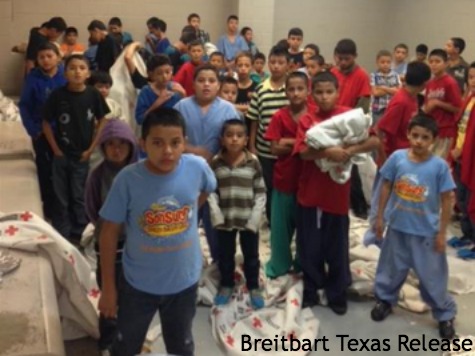 Over 6,000 Illegal Immigrant Children Allowed to Enter the US in October 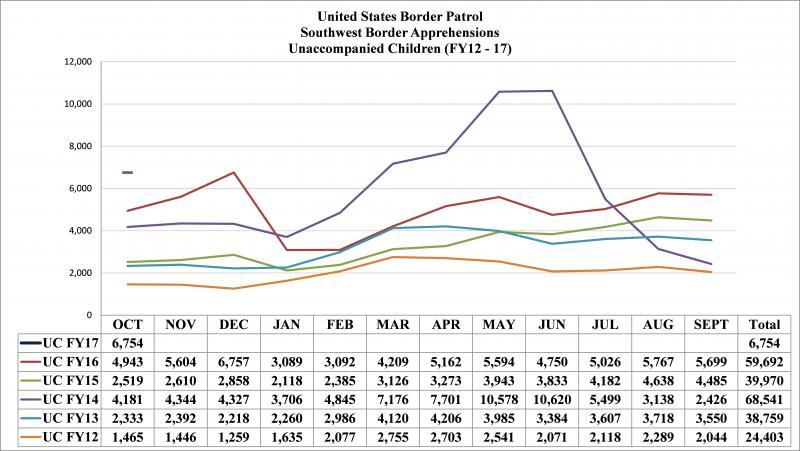 Since 2014 over 133,000 illegal immigrant children have been placed in homes across the US.

The number of illegal immigrants coming across our southern borders has surged in recent months, presumably as illegals fear a Trump Presidency tightening control of the borders. Even before Trump’s win the numbers began to increase: 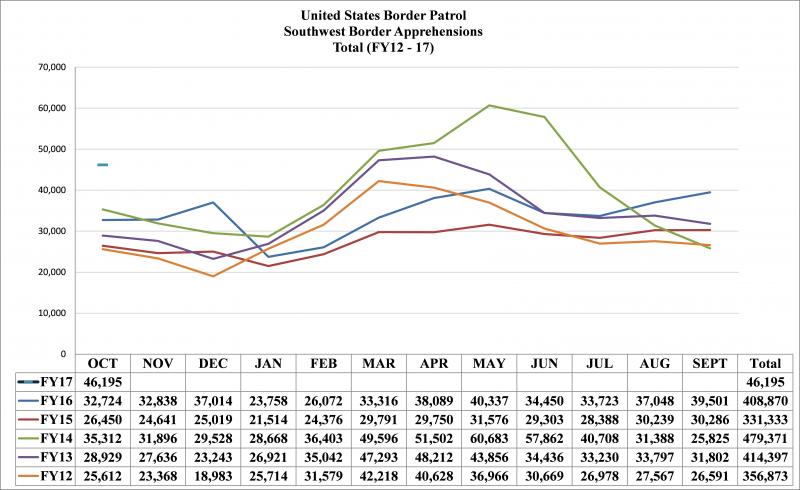 In response to the increase in illegal immigrants the Secretary of Homeland Security, Jeh Johnson has instructed immigration and the border patrol to increase the amount of detention space to accommodate the illegals. From the DailyCaller.com:

“I have told our border security and immigration enforcement personnel that we must keep pace with this increase,” Johnson said in a statement Thursday.

“As a result, there are currently about 41,000 individuals in our immigration detention facilities — typically, the number in immigration detention fluctuates between 31,000 and 34,000 – and I have authorized Immigration and Customs Enforcement to acquire additional detention space for single adults so that those apprehended at the border can be returned to their home countries as soon as possible,” he added.

Over 6,000 Illegal Immigrant Children Allowed to Enter the US in October was last modified: November 26th, 2016 by Jeanine Martin

Send the rats back!

Just look at the crime statistics in Pr. William Co. Just about every time there is a stabbing, its one them. Now they are infiltrating Loudoun.

This is why Fairfax county had a meal’s tax on the ballot this year earmarked for education. You can pay a meals tax or you can have your property tax raised to pay for educating this illegal immigration surge.

And vote for Corey Stewart for governor next year.

That sounds good but that is not the best move we cannot rely on a hot air person to resolve these issues it will take all of us to hold our legislators feet to the fire.
Trust me they are hired ILlEGALLY as crews of subcontractors on state jobs , apartment complex developments , subdivisions as unlicensed contractors. Virginia state documentation proves this.We should focus our attention in upping the temperature on Attorney General Mark Herring and what better time then now a complete year leading up to next year’s elections. all of these violations issued must come together as one issue for our gubernatorial candidates, don’t let them hide this any longer.
http.//watchdog.org/202012/subcontractors-shadow-economy

What about the parents who bailed on these children did they leave prior to 2016 to come to America to seek a better life for ” themselves “? So now Virginia is luring parents away from their children or reuniting them? If reuniting them shouldn’t the parents be held responsible for back child support can you say Department of Child Enforcement Services. I will never ever attack the children I will attack the system that allows the Virginia government, elected officials and legislature to break up families
( foreign and domestic ) I wonder what the number is of Immigrant father’s that were allowed to come to Virginia bail on there parental and financial responsibilities. So how has this broadened the base?

There is no evidence families are being reunited.

You got to love the illegal immigrant numbers game. Nobody actually knows the numbers. The quoted number of 11 million is from at least a decade ago, well before obama took office. More recent numbers are in the 30 to 40 million range.

If you bother to go to NOVA, the numbers of immigrants, both illegal, questionable, and legal is quite obvious. Fairfax County has substantial gang problems in neighborhoods and schools. MS13 is just down the street from my sons old neighborhood.

Lefties like old redneck like to redicule people who are concerned. They remind me of the definition of a strong conservative – a liberal who has been mugged.

2. You say: ” . . . Jeh Johnson has instructed immigration and the border patrol to increase
the amount of detention space to accommodate the illegals.” You make is sound as though DHS is “accommodating” these people so they can settle down. In fact, according to the article you cited: They are being accommodated “. . . so that those apprehended at the border can be returned to their home countries as soon as possible,” So — most of them are being shipped back home.

In fact, they have deported more than the sum of all the presidents of the 20th century.

President George W. Bush’s administration deported just over two million
during his time in office; and Obama’s numbers don’t reflect his last
year in office, for which data is not yet available.”

As normal, Old Redneck, you don’t know what the fu-k you are talking about. Yes, 6,000 children is a lot. Because the government did not do what it promised us to do in the aftermath of the 1986 Amnesty (secure the effing border), we are at this situation where we now have MILLIONS AND MILLIONS of illegal immigration children and anchor babies. Just what the hell has our country turned into? A repository for the excess population in Latin America? Eff that. As far as IQs go, if you have not yet noticed, Mexico and Central America are not exactly intellectual powerhouses. You would have to look long and hard to find a single Noble Prize winner among the nearly 150 million people who live there. And finally, the deportation numbers are bullshit. The Obama Administration changed the criteria for deportations to fool us – and maybe you, but not me. This administration considers anyone turned away at the border a deportation. That is total nonsense, BTW, are you coming to our Inauguration Party?

I would love to be at the inauguration I am so proud but I can’t I have to work and compete against illegal aliens in Virginia because my family suffers. Enforce Virginia law there are two borders here National and State let’s enforce our laws in the state so as we’re not the black eye on the rest of the country.

The landscaping business is pretty slack in January. You can take a day off.

You shouldn’t be so racist as to imply illegal aliens are just landscapers. For your knowledge because you’re ignorant to these facts the Landscaping industry is a 70 billion dollar a year industry with a growth of 4% to 65% residential 23% commercial 42% of its maintenance 19% is design-build once again your ignorance that would be architectural Landscaping only 13% is lawn care that’s for candy a$$es like you 6% arborist 12% or so snow removal and irrigation. Bruce continue to take your estrogen pills your transformation is almost complete don’t worry I would never classify you as a man to begin with , it’s okay Terry has a bathroom for you also hahaha

I was just mocking you and your one-trick pony. Heh.

You should not jest over what is credible it is a pony, a pony that keeps turning many different tricks all we need to hold two validated as senator Bill DeStephs bill SB 483 you will see he seeks to make it illegal for the Department of Labor and Industry to notify the Department of Professional occupational regulation of the contractor breaking the law. isn’t it always someone commenting on Labor that doesn’t labor themselves .Our next Governor will have to sign employee misclassification legislation it will be a joke if they do not stop this. Yes I am focused on one thing I know very very much about no need to comment on anything else , if Republicans can’t enforce the law how the hell could they ever create one job?Remember government doesn’t create jobs entrepreneurs do and the playing field must be LEGAL and LEVEL not paid for by any Building Association that wants illegal labor !!!!!! Employee misclassification is a 7.8 billion dollar a year lost to the federal government JLARC estimate in Virginia that it’s as much as 25 million annually to the general fund , I say it’s more and this data also discredits that other JLARC report that states illegal immigrants do not work on state jobs , yes they do. just because you are not a working man don’t try to minimize the position of another or the actual fact in the data ask your representative out of all the violations the Department of Labor issued and referrals to do for how many of these contractors had Virginia Employment Commission accounts for their employees. Bruce you don’t 1099 25 million illegal aliens you 1099 a small percentage of them and then they pay the others.The taxpayer then subsidizes their black market pay with welfare and our legislators let the contractor break the law unabated . Go ahead ask your Senator what does he know about it.

Nope. You’re a one-trick pony and it’s fun to mock you simply because of that.

Don’t worry . . . Trump will be inaugurated on Jan 20 and within a week he will have brought back from overseas a few million jobs, and, coal mines will be hiring anyone who shows up.

You’ll have your choice of really, really good jobs.

6000 in October you @#$ing waterhead. That is one month. This surge has been going on for almost two years now thanks to Obama’s announcement that he has no intention of enforcing immigration laws prior to his last reelection.. You Soros scumbags need some new material… The baloney that he deported more than ever has been debunked. Like everything with Obama, he was lying. Repatriations are not deportations, waterhead.

6K just in October in addition to the hoards and hoards who have already infiltrated. How about all 6K move into your house?

Who is raising 6,000 children? Children without parents to raise them are far more likely to have serious issues as they grow up. How did they get here? A kid doesn’t just figure out how to illegally enter another country by himself. My child couldn’t find his own way to Florida! This is clearly a coordinated effort and they should be reunited with their families in Mexico ASAP.

They are from El Salvador, Honduras, Guatemala and Ecuador mostly. Baby Momma left them with their Grandmother to immigrate and with Obama’s promised amnesty, they are paying smugglers to bring them to mostly Northern Va.