Parliamentary Ping-Pong in the Second District 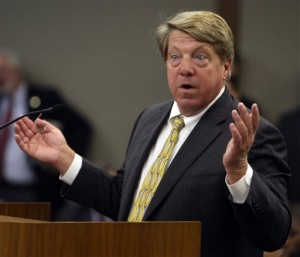 In the latest installment of an ongoing dysfunctional drama, a meeting called by the members of the Second District Committee–in conflict with an apparently improper call issued by the Chairman for the same time slot–was convened tonight to hear Sen. Frank Wagner’s appeal arising from the April 26 Convention that elected Curtis Colgate.

The outcome, on a roughly 2-to-1 vote, comes as no surprise. Less surprising still is that this controversy will now make its way to the RPV State Central Committee, which will likely take up the matter next month, either at the State Convention in Roanoke, or at a special meeting called for the purpose of hearing all of the appeals arising from this season’s mass meetings and slating episodes in Virginia Beach, Campbell County, Fauquier, and possibly elsewhere.

Interesting side note: the Virginia Beach slating contest was by far the most expensive, both for Curtis Colgate and Sen. Frank Wagner and his YG Virginia backers. The race easily accounted for over $200,000 in campaign spending. The irony? If this result holds, the balance of power on the State Central Committee will only change by one single vote, and Curtis Colgate will still be there. That’s because Curtis now reverts to his regular seat on State Central, attending meetings seated in the same row as Sen. Wagner. The only seat that will have been lost as a result of all this brouhaha will have been that of outgoing Chairman Gary Byler. Just a guess, but that’s got to be the most expensive single vote on State Central ever. Not exactly the sweet, resounding victory the Ray Allen/YG Virginia crowd were undoubtedly hoping for, especially after their crushing loss in the 3rd District, and their likely defeat on Saturday in the Fifth District.

Parliamentary Ping-Pong in the Second District was last modified: May 8th, 2014 by Chad Ochocinco

Reply
Chairman Mullins affirms Curtis Colgate as 2nd District Chairman - The Bull Elephant May 15, 2014 at 10:01 am

[…] Bull Elephant wrote earlier about the 2nd District Parliamentary Ping Pong match to determine who will be 2nd District Chairman – Frank Wagner or Curtis Colgate. It […]

[…] this year, there is currently either a net loss of one for Cantor depending on the outcome of a disputed contest, or at best, a […]

Were you assuming Cantor would hold onto the 7th District Chair? 🙂

I don’t see how the “committee” can make a call for a meeting without the chairman, it should all be uniform. Regardless of the outcome, the dirty politics of Cantor, Wagner, Taylor, Long et al won’t be forgotten. I’ll be glad if the GOP splits, gets rendered asunder, and suffers whatever bad befalls them. I’m pretty sure this won’t be a matter of folks just pulling the lever for the “R” guy anymore, not in this day and age. Corrupt Republicans are just as bad as corrupt Democrats, even worse, because our party is supposed to have some morality.

The worst part is seeing the corruption coming not through but originating from elected officials and channeled through a unit chairman who knows it’s wrong.

I also can’t fathom how a committee could make a call for a meeting without including the chairman, either – to me it makes ZERO sense!

this is a prime example as to why we have a democratic governor in Richmond for the next 4 years.–power plays at any cost–those that know how to win will stop at nothing to retain their power structure–even splitting the party–remember they are the ones that gave us SESSOMS for our mayor that supported the democrats because the offering were too good to refuse.–money talks for those kind of people–how about you?–will you get involved or be couch potatoes?

SCC needs to hear the whole enchilada.. and reconstitute

I don’t understand this statement, “a meeting called by the members of the Second District Committee–in conflict with an apparently improper call issued by the Chairman for the same time slot.” Could you clarify?

Also, did anyone “flip” in how they voted the first time around?

As I understand things (and I’m sure someone will correct me if I’m wrong), more than 1/3rd of the Committee banded together to issue a Call for a meeting to hear Wagner’s appeal. Then, Curtis as Chairman issued a Call for the same night, but starting the meeting 30 minutes earlier. According to what I’ve been told, the Call issued by Curtis was 19 hours short of being a full 7 days ahead of the meeting, as required by the Party Plan.

Not sure who voted what, and when, so don’t know if there were “flips,” but the outcome (which I now understand was 7-4) indicates that’s a distinct possibility. The vote on April 26th that led to the seating of the Virginia Beach delegation at the Convention was separated by one vote (8-7, I believe), so it is possible this is a turnout issue as well. I just don’t have a better read than that, unfortunately.

Schedule a meeting when you know your opponents likely supporters can’t make it there.. Yes, these are Republicans. We own this.

More dirty tricks or sleight of hand? It’s not enough that Wagner has a State Gov seat, he also has to have control over ALL layers of Va Beach (Longo his is VA Beach Bag man) and he gets to control 2nd District and his State Seat State/Richmond Gov? Apparently, he has some $$$.back door Transportation profiteering at stake? It’s becoming pretty obvious that there is MUCH more to the reason behind his persistence than meets the eye.

Can we get more details on exactly what happened at that meeting and why Colgate’s call was improper?

So is this one probably final? Or will SCC likely overturn this and give the Chair seat back to Curtis?

I certainly hope they overturn it!

Kate, I don’t know all the facts, so I just can’t say how it will ultimately turn out.

And I thought 10th district politics was crazy…

How’s that old saying go? “All politics is loco”

The fact is there is wrong committed on all sides. This is Blazing Saddles politics and the joke is on the district, despite the dominance and bullying all coming from VB. Why have a 2nd CD at all if the rest of the districts vote is rendered meaningless? RPVB trumps all five units and the other 4 are seen by a few elitist RPVB members as second class.