There has a been a nearly universal negative reaction to Scott York flip-flopping on his decision to run again for Chairman of the Board of Supervisors. Â In January he was in it to win it, in February he wasn’t. Now he’s in the race, again. In Loudoun county we’re suffering from whiplash trying to keep up with Scott York’s decision du jour.[read_more]

On Wednesday the Loudoun Times Mirror published an editorial about York’s run for office. It was titled, “Loudoun Chairman Scott York betrays our trust”. It went down hill from there.

Last week, the Times-Mirror and the Loudoun County Chamber of Commerce honored York as the newspaperâ€™s Citizen of the Year. He was celebrated by the newspaper, the business community and by his peers in government as a steady, guiding force in the growth and development of the county.

The award was predicated on the idea that York was retiring, and that his service warranted recognition whether or not one agrees with his political legacy…..

Neither the award, the celebratory event or the resolution would have happened if York had been frank, candid or sincere about his intentions………..

Both the newspaper and the chamber questioned York about unsubstantiated reports that the chairman was considering to run again as an independent candidate. The reports caused both organizations to reconsider York as Citizen of the Year and to postpone the event until a new citizen was named.

The chamber does not endorse political candidates. Yorkâ€™s candidacy, either formal or considered, would have been construed by many as political support.

Similarly, the Times-Mirror questioned Yorkâ€™s intentions, worrying that he could use the non-political Citizen of the Year award as a bouquet in a political campaign……

Times-Mirror Publisher Peter Arundel and chamber CEO Tony Howard each asked York directly if he was running for office. He said â€œnoâ€ to both. As such, the newspaper and the Chamber of Commerce decided to proceed with the Citizen of the Year award and event as scheduled…..

we feel betrayed by the chairman, as should the Chamber of Commerce, the Virginia House of Delegates and Loudoun citizens. The county requires straight answers and strength of conviction at a pivotal time in its growth.

Others would call it getting snookered.

We’re realists. We understand that politicians change their minds. But Yorkâ€™s yes-no-maybe attitude about running for re-election, and his flip-flopping political affiliation lack the certainty of commitment.

Trust is at the heart of it. Citizen of the Year remains an important idea about community service. It shouldnâ€™t be tarnished by disingenuous behavior. We wonâ€™t rescind the award to Chairman York, but we canâ€™t say that weâ€™ll trust him with it.

Commonwealth Attorney Jim Plowman reacted to the above editorial, he said,

This is an editorial that every voter needs to read, regardless of political persuasion. I personally understand the difficult decision whether or not to run for public office, but what we have just seen from our current Board Chairman, Scott York is nothing more than deliberate dishonesty and public deception for his own personal gain. Public officials use their skills and talents to serve the public. When you see one making decisions for themselves, it’s a clear signal that they’ve been in office too long. Disgraceful.

Wow. The Times-Mirror and the Chamber of Commerce Â got snookered as did Republicans who believed Scott York when he repeatedly said he would not run again for Chairman. Â The Chairman of the Loudoun County Republican committee, Mike Haynes, reacted swiftly to Scott York’s news.Â

“Scott York’s flip flop is very disappointing. Four years ago Scott approached the Loudoun County Republican Committee, asking to return to the party after previously running as an independent. We welcomed him back and helped him in his successful run for chairman. He announced months ago that he would not run again, that he had decided to retire, and we took him at his word. Being a Republican has to mean something. You can’t just jump in and out of the Party to further your political career. Loudoun County voters want elected officials who keep their word and run for office because they stand for something, not just to further their own career.”

“The dishonesty shown by Scott York in how this was handled is troubling. He told everyone–including our local Chamber of Commerce, Virginia House of Delegates, and local newspapers–that he was retiring and was not seeking office. Based on this false premise, Scott York recently was given two awards: one jointly awarded by the Chamber and the Loudoun Times-Mirror, and one by the Virginia House of Delegates. Neither, in my opinion, would have been awarded had he said he was running for office. So, he misled everyone, not just his own party.”

“We need a Chairman who is a man of his word. Loudoun citizens deserve someone who will give straight answers and stand for what is right, even when that may not further his own interests. I urge all Republicans in Loudoun County to support our nominee, Charlie King, for Chairman. We will work hard to elect Charlie and our whole Republican ticket–and to defeat any candidate who runs against them.”

The local blog focusing on HOA issues, LoudounHoa, also had something to say about Scott York’s run for Â re-election.

The Loudoun Times Mirror is rightfully and righteously indignant that Loudoun Board of Supervisors Chairman waited almost a week after being named LTM Citizen of the YearÂ before announcing he had looked over the field of candidates who filed to succeed him and found them hopelessly wanting in experience.

The author opines that the Loudoun Times Mirror should have gone further in their criticism of Scott York,

Where are its stories about Scott Yorkâ€™s trip to Germany, accompanied by Loudoun Hounds/VIP Sports executive BobÂ Farren, in the months beforeÂ the Supervisors speedily approved a zoning change to accommodateÂ Farrenâ€™s baseball stadium on Route 7?

Where was its investigation behind the sale of land to Raging Wire without putting it on the open market?

Where are the stories about government that the LTM passed byÂ during the months it was seekingÂ zoning approval for its Courthouse Square project in downtown Leesburg? 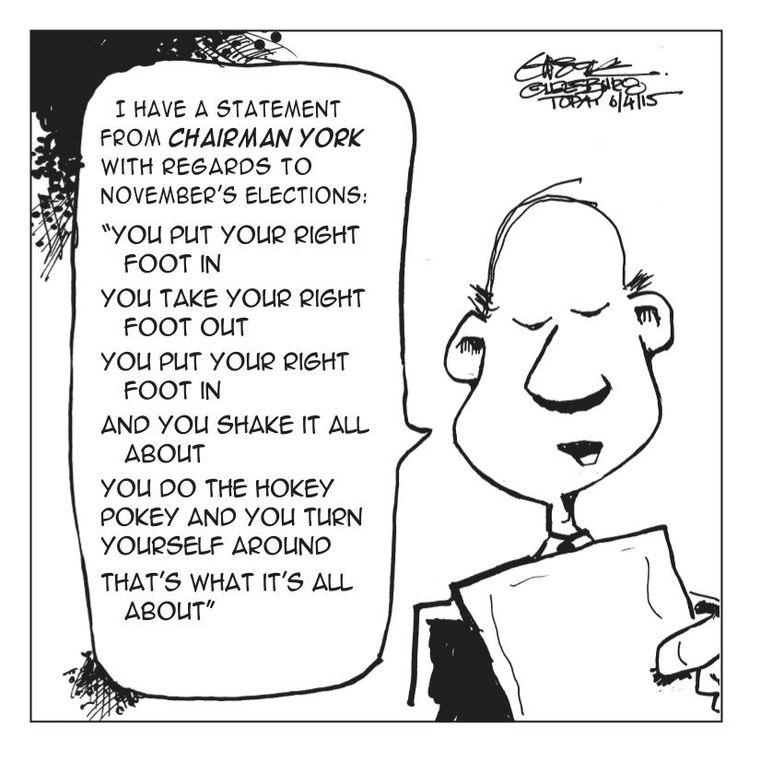 It’s clear that the people of Loudoun county are not pleased with the deceitful Scott York. He has betrayed us and lied to us. He is not the kind of man we need to lead Loudoun county. Â We should have known better than to allow him back into the Republican party in 2011. That mistake will never be repeated.

In Loudoun we have the choice of electing an honorable man, one who has ALWAYS been a Republican and always will be. Charlie King is a well respected Leesburg Attorney who will do us proud as Chairman.

Republicans will not be supporting Scott York for Chairman. Â Nor will Democrats. York doesn’t have the support he needs to win, not even close. York needs to reconsider this fool’s errand. Â Some in Loudoun believe York will flip-flop once more and not file to run. Some believe he will see the negative reaction he is receiving from across the county and change his mind once again. Â He has much more support to withdraw than he does to go forward. Â We hope he will heed the warnings.

Reactions in Loudoun to Scott York’s Decision to Run for Chairman was last modified: August 9th, 2015 by Jeanine Martin

Chamber Insider Helped Scott York Win Citizen of the Year While Helping Him Run for Re-election - The Bull Elephant August 3, 2015 at 1:41 am

[…] Each year in May the Loudoun Chamber of Commerce and the Loudoun Times Mirror host a gala where they award the Citizen of the Year for the county. Â The award is not given to current political candidates or those in office who intend to run for office re-election. [read_more} After LoudounÂ County Chairman of the Board Scott York assuredÂ Chamber President Tony Howard and the publisher of the Times Mirror,Â Peter Arundel,Â that he had no intention of running for office again, they chose to make himÂ Citizen of the Year. Â Had the Chamber been aware of York’s intention to run again, he would not have been chosen for the award, or so they said. Â When Scott York declared his run for re-election a week after he accepted the award, reactions were swift and universally negative.Â  […]

This is just a perfect example of why many don’t trust politicians to begin with. Many things are orchestrated and come off as not genuine or real. Throw in how many politicians change positions depending on the political winds and how it benefits them. It is all about what is best for the politician and I don’t see this as anything different. Power is intoxicating and it fosters delusions of grandeur. It’s just cloaked in (once again) “it is best for the residents or there is nobody else worthy of doing the job”. I mean really!? Politicians need to get over themselves and be just a little more humble. (Not all of them, but many do)