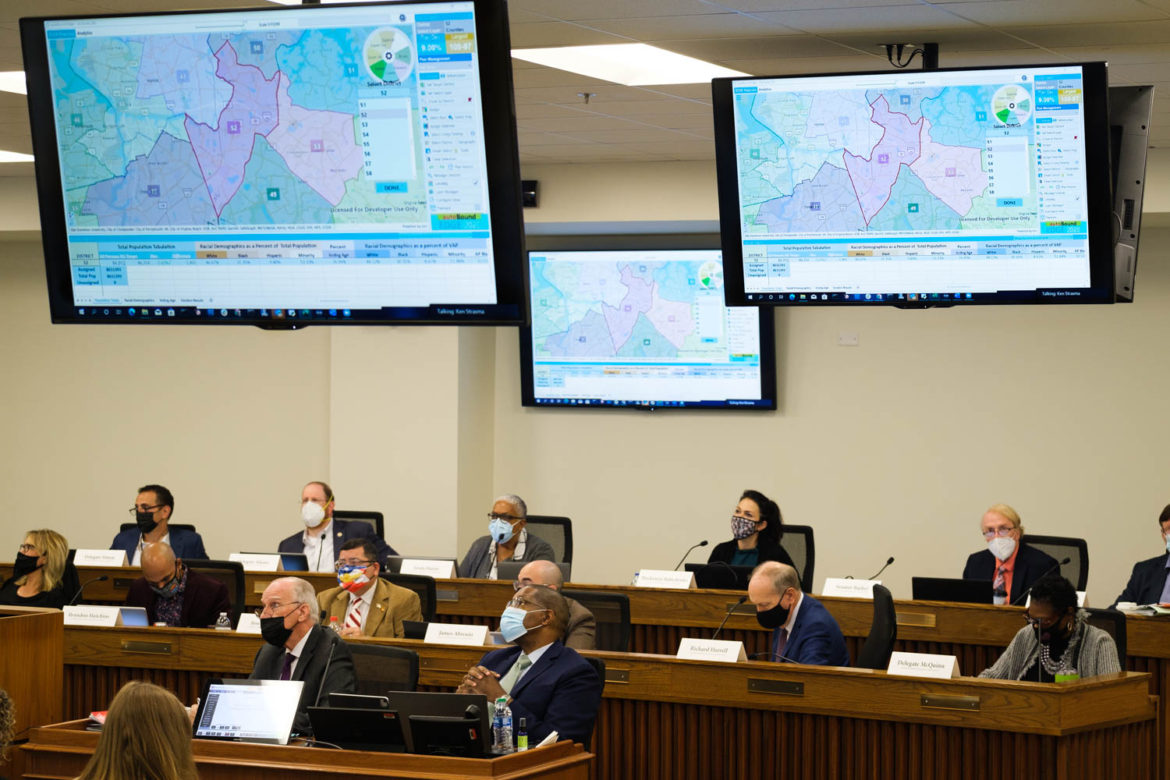 Draft maps are presented at a meeting of the Virginia Redistricting Commission. (Ned Oliver/Virginia Mercury)

The Virginia Redistricting commission has failed to reach an agreement on new maps for the State Senate and House of Delegates. On Friday, after the latest compromised failed, several Democrat members of the commission walked out of their meeting, including Democratic co-chair Greta Harris. Harris said, “I think our work is done and what a shame it is”. The deadline for new maps to be submitted is Sunday, October 10th. A meeting scheduled for today was canceled. So it appears the commission was unable to complete their job and will not be presenting new district maps to the General Assembly.

With the failure of the commission, redistricting will be decided by the Virginia Supreme Court which is conservative. The justices will not draw the maps themselves but will rely on maps designed by experts chosen from lists presented by both political parties. The end result is likely to favor Republicans because that’s how the court leans.

Actually, this is the best possible scenario.

Did you see the picture at the top? All those commissioners are masked bandits. Call the police! We’re being robbed.

I think the new map will look much better with the eastern boundary of Districts 6 and 9 forming the demarcation between Virginia and the beginning of the new state of Appalachia. From New York to Alabama, the 4th largest state in the nation. Imagine just the toll revenue from outsiders.

Sorry, yourself. There is no way to draw maps that favor Republicans. We shall see but your predictions have a way of falling flat more times than not.

The Democrats walked out because they decided that they could handle it without controlling the Districts. They just control the elections.

Exactly! No maps favored Republicans which is why Republicans refused the so called “compromise”.

The Supreme court won’t pay any attention to those maps. They start all over with new maps and then vote on which one to choose. It will be a Republican-leaning map.

Sorry Charlie! Be careful what you wish for!