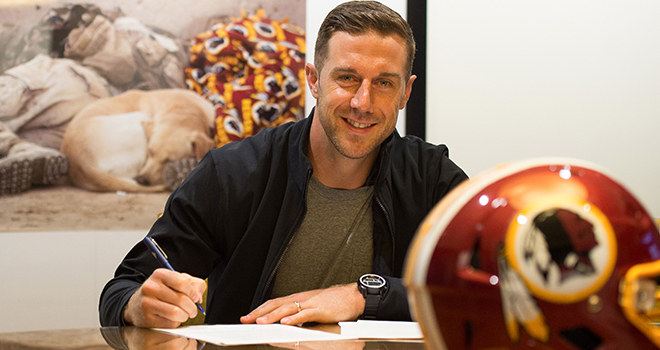 Redskins draft picks and schedule for 2018

Last month the Washington Redskins traded the Kansas City Chiefs for quarterback Alex Smith giving up cornerback Kendall Fuller and a third-round pick in the 2018 NFL Draft. Alex Smith is 33, three times chosen for the Pro Bowl and he took the Chiefs to the playoffs four times.  He certainly has an impressive record but the Redskins still need a good backup quarterback.  Did they get that in the draft last week?  No.

The Skins first pick in the draft was Alabama defensive lineman Da’Ron Payne.  (I hate names with punctuation marks but whatever, I’m sure he’s a very nice young man who can play some football.)  The Skins didn’t choose a quarterback in subsequent of rounds of the NFL draft although a couple of former Hokies were chosen. From WTOP.com,

Day 3 saw the ‘Skins bring a couple of Hokies home: nose tackle Tim Settle and cornerback Greg Stroman played together at Stonewall Jackson High School in Manassas, and again at Virginia Tech. Now they’re Redskins teammates after getting drafted in Rounds 5 and 7, respectively.

See all eight of the Skins’ draft picks here.

The Redskins schedule for this fall isn’t too terribly bad, mostly we play the toughest teams at home with the exception of the Eagles and Dallas, two good teams we have to play both at home and away.  But I can’t help but wonder, why don’t we get to play the Cleveland Browns? And why is our ‘Bye Week’ always so early in the season?  It’s nice to see the Skins again playing on Thanksgiving even if it does wreak havoc trying to schedule dinner around the game.

Until we can draft a new owner, we’re doomed.

So true. Although, Danny’s boys in the front office seem to have come up with what I’d call the 1985 Bears plan – win with a great defense and an adequate offense. Jonathan Allen and Da’Ron Payne ought to make the D-line very dangerous. Linebackers like Zach Brown and Ryan Kerrigan ought to have old man Eli Manning suffering from insomnia. Barring another flurry of injuries the ‘Skins D line and linebackers look pretty darn good. Josh Norman was a big help in the secondary but they are still one more top defensive back away from being a formidable D. Troy Apke is as fast a light but we’ll see if the Penn State safety can contribute in 2018.

As DJ Rippert noted, we acquired Kevin Hogan and we may still have Colt McCoy as a serviceable backup if Alex Smith is injured.

Hail to the Redskins!

On April 6 the Redskins acquired quarterback Kevin Hogan in a trade with Cleveland. I’ve been watching Kevin play QB since his freshman year at Gonzaga High School. The McLean resident and Stanford University standout has great potential in the NFL. The fact that he ended up in the bottomless pit of despair known as the Cleveland Browns is hardly his fault. Alex Smith has a few more good years left and I’m hopeful that he’ll be able to bring Kevin along. If not, the Redskins will have to find a different backup in a future draft.

Well it look like the Redskins ( the
team with the first crossdressers fans in the NFL) will be facing the AFC South.
This Division boast the Colts and the tougher up and coming Jaguars and undoubtedly will have their hat handed to them by the Tennessee Titans.