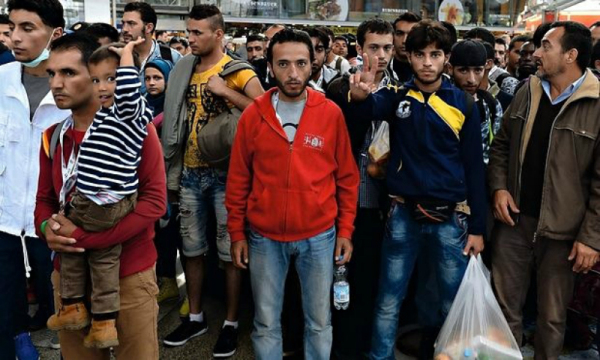 The American People are a compassionate people, charitable and tolerant, and always ready to embrace the challenges the world sets before us (at least eventually). This Syrian Refuge crisis, however, has broken upon a much less open America, much less worried about the poor and the hungry and the sick. It infuriates me that this reality has become accepted as a stain upon our compassion and our systemic American values. What we are witnessing is not intolerance or bigotry, selfishness or greed; but a righteous indignation toward to a government that has sold us out at every turn, has torn our Constitution asunder, and spit upon the virtue, the sovereignty, and the dignity of the American Citizen.

Americans have always had a right to great pride and confidence – a pride and confidence frayed by nearly two decades of abuse and decline. A free and prosperous people are the most likely to demonstrate the most compassion and charity, for they have the most to give and no reason to fear giving it; but that is no longer the America we live in today. Our governments no longer enforce our immigration laws. Our corporations are bringing in immigrants on work visas to be trained by US citizens for a couple months before those citizens are on the street looking for work. Our wages aren’t going up and our economy isn’t growing. In fact, to find silver linings in our economic circumstances, one must (despite how silly it is) include statistics comprised of public sector jobs which do not produce wealth or capital, but exhaust it.

Islamists – and let me define “Islamist” (an individual who believes that Islam is the only true religion and that non-believers should either be subject to Islamic Law or killed) – are a different kind of enemy. They do not wear a uniform to battle. You’re shopping at Food Lion and seconds later you’re being torn apart by shrapnel from a suicide bomber’s vest. You’re celebrating the New Year in Times Square and someone drops a vile of biological weaponry. You’re praying in a Temple or shopping in a mall and then bullets, screams, and darkness. That so far, all we’ve faced are a few failed bombings, a few successful ones, a couple homicidal rampages, and planes flying into buildings, does not discount the crucification, rape, beheading, hotel massacres, concert massacres, and suicide bombings experienced throughout the rest of the world.

Have our governments given us reason to feel secure? Not even a little bit. They are great at taking away our liberty, but poor at protecting us from harm.

I am a Christian – and because I am, my heart breaks for those living in the Middle East, for the people in Syria, in Iraq, Iran, North Korea, Saudi Arabia, Germany, China, Russia, and Paris, France. I want to help them and to show them love. I want a government I could entrust with that very charge and responsibility. I want a government that would work tirelessly and methodically to help orphans and widows and cripples – victims all of the horrible ideological war taking place in the Middle East. I want to trust that this government would also desire, with the same passion as the American People, to protect these very victims from their tormentors, from the Islamists, by ensuring that not one of them was given safe passage to our land.

Yet, such a government does not exist in America. We live in a country where our government is as likely to harm us as they are to protect us.

It’s not the victims of ideology and religion in the Middle East we’re afraid of. It’s our government and their reckless irresponsibility. We do not trust our government, nor do we even have faith in their good intentions. I would venture to say, that every person you’ve heard proclaiming that they do not want these Syrian Refugees would change their tune in an instant if they believed, for one second, our Government could be entrusted with the responsibility of caring for the widows, orphans, and injured who have suffered under the Islamist tyranny in the Middle East, while still protecting We The People.

My heart breaks for these people, but there is so very little I can do. I live in a country ruled by leaders that have allowed gangs and criminals to cross our borders. We catch them and release them. We let immigrants overstay their visa’s – a policy which enabled blood-thirsty Islamists to slaughter over 3,000 Americans on September 11th. Did they learn their lesson? Did anything change?

No. We love the people of the world. We do not trust our government. We care about the oppressed, yet we are increasingly oppressed ourselves. I’m opened minded to the arguments and the debate with regard to these Syrian Immigrants, but let no one proclaim that those opposed are opposed out of malicious intent, or cruelty, or bigotry, or intolerance. That’s a lie; and a disgraceful one at that.

Nothing has been said here about the fact that the “refugees” pictured always seem to be young men of fighting age, not the old, not women and children. The term “refugee” may cover the Islamic principle of “hijra” or conquering by colonization and population explosions.

The thing that bothers me is that these are the same leftist Americans that began unraveling the War on Terror within a few months after 9/11. There is simply no way to reason with them and they will take us all to hell just to prove some fantasy of their mind. You can bet that even the worst possible attack, a WMD of some sort, will be excused away in a blind search for proportionality and trumped up legalities.

It’s always amusing when anti-Christians try to shame Christians for not being Christian enough. Virginians have a great deal to be concerned about with Muslim camps in several locations, a large Middle Eastern community in NoVa supportive to Islamic extremism, two international airports, military training bases and a rather large port (ahem) and our Dingbat Democrat governor who thinks it’s okay to take in a few more Syrian “refugees.” The latest threat to attack in 15 states, and naming Virginia as one of them, should cause wiser heads to prevail.

I often wonder fifty years from now when freedom loving individuals look back on this period of political history in the United States if the only milestone that will be debated among them is was this the moment that a constitutionally enacted and elected Congress collectively turned their back on it’s well defined role of democratic governance to become in effect a show piece for the growth of executive management under the direction of a statist based bureaucracy driven by corporate public policies and justified by the judiciary. Obama as the first black president, the immigration debate, open borders, the economic perils of out of control spending, even the rise of radical Islam will just be a set of forgotten footnotes. The Constitution and the ideas of the founding fathers just a quaint set of concepts relegated to the mistakes of the past. I hope not but I’m not sure, I wouldn’t bet on it with any confidence.

The milestone — whenever it was passed — was when we abandoned the idea of treating everyone “equally” and adopted the doctrine of “diversity,” which assigns privilege based on ethnicity.

Once Republicans accepted that change, they had to abandon criticizing Barack Obama as an equal, and condescend to him as a “privileged person of color.”

Even liberals such as Arthur Schlesinger, Jr warned in the 1980s that the adoption of “diversity” and “multiculturalism” would paralyze our political system. They probably could not have guessed it would happen so soon.

Schlesinger merely had to look at the trends in Europe and then extrapolate. Frankly, you can do the same thing today and the result is the destruction of Western Europe. Some give it to 2050, but some nations will fall within a little more than decade. Eastern Europe sees what is happening and is now resisting the EU dictates.

You have an invading force that is being accommodated because the Eurosocialists can’t bring themselves to admit they have been wrong. The pathology of their mind is truly astounding.

An appropriate post for a fellow who uses Janus as his signature.

Let every proponent of letting our Borders open to every person walking, prove their sincerity by taking 10 Syrian Make refugees into their own homes, un-vetted, random, and with the chance that 1, is a jihadist, looking for an opportunity. Anyone not willing to do so, should not throw stones at others, who listen to their own Intelligence agencies, explain there is no way to know, who is who, on this scale. Not to mention the fact, that the money to pay for this dosen’t exist, and we continue to spend as if there is no consequence.

The refugee flood is destroying Europe before our very eyes. Don’t listen to me, listen to what they are saying from their own mouths. The video in this link has numerous examples of what they believe the future of the west should be:

Pete Snyder’s piece yesterday calling on Terry McAuliffe to reject Syrian refugees is an early sign he should and will be our nominee for Governor 2017. You will never see Ed Gillespie write something like that; he’s too much a creature of the Chamber of Commerce and GOP-E.

Just what do you mean, “We can no longer trust our government”? If you like your doctor, you can keep your doctor.

you could keep your doctor. You had to pay your fair share. But you were never forced to switch. Switching was your choice based on a free market economy.

Try spouting that nonsense to a couple with three children making $60,000 a years whose premiums skyrocketed? Keeping your doctor and paying lower premiums was strongly implied by Democratic leaders. For crying out loud, one of the main architects of Obamacare, Jonathan Gruber, even admitted to lying about it. Sheesh. Some people are so ideologically chained to certain political boats, that they will go down with the ship when it sinks.

Not true SD. My family had private insurance for years. Obamacare came along and Blue Cross/Shield shut down our entire “Luminos” program (not just our policy but the whole thing). I had no desire to change and our entire family’s insurance evaporated. We were then forced onto “The Exchange” and got the “Innovation” health plan in Virginia. It was a complete nightmare. Nothing on the policy worked, not even the phone number on the card. I could write a book on how bad Obamacare sucks.

I can’t be sure if your post is intended as sarcasm or if you just plain don’t understand what happened?

Agreed… what the chattering class fails to grasp is that we simply don’t trust them on immigration any longer.