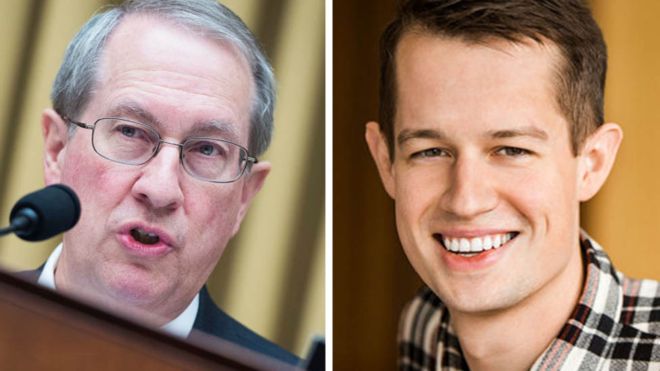 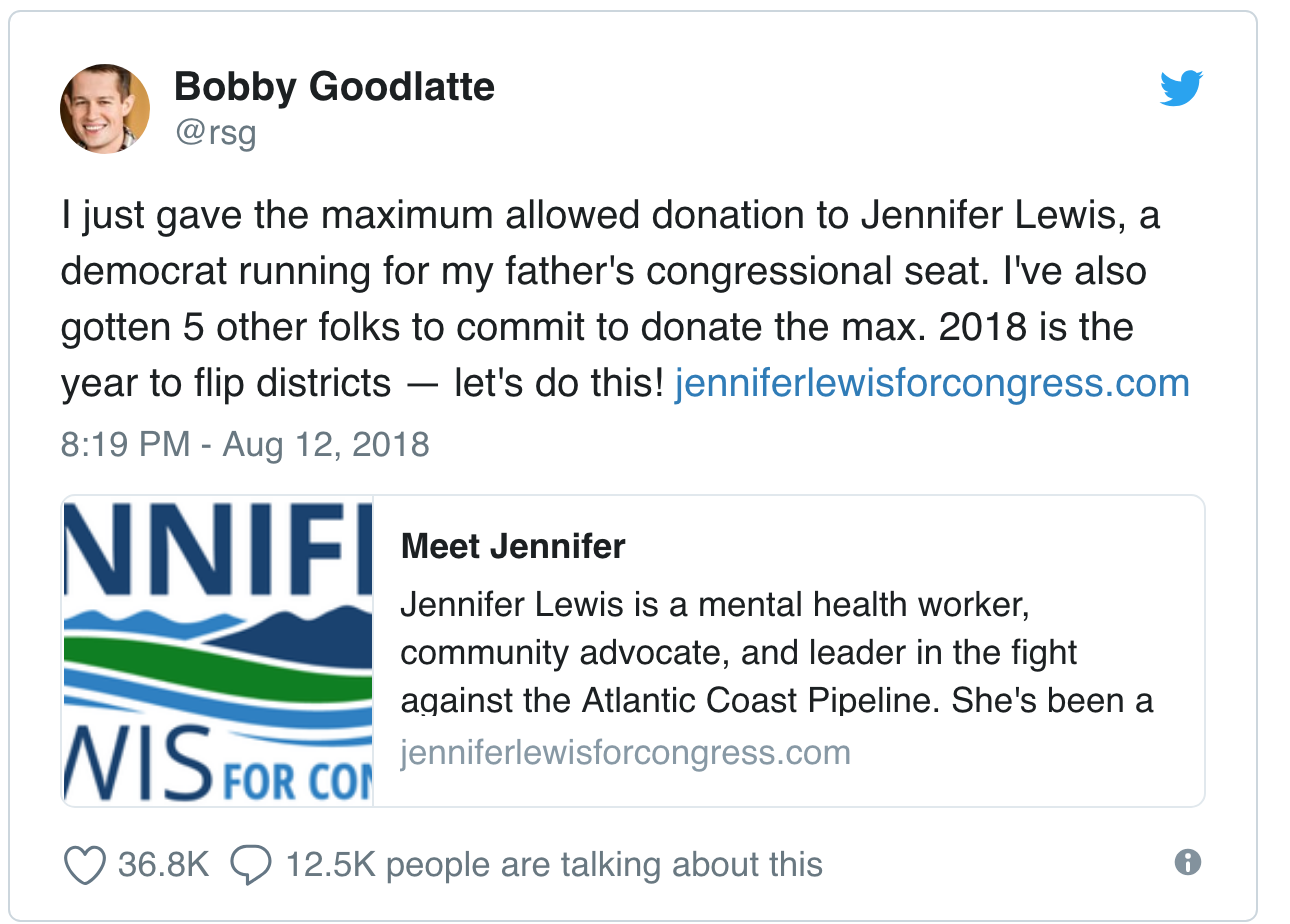 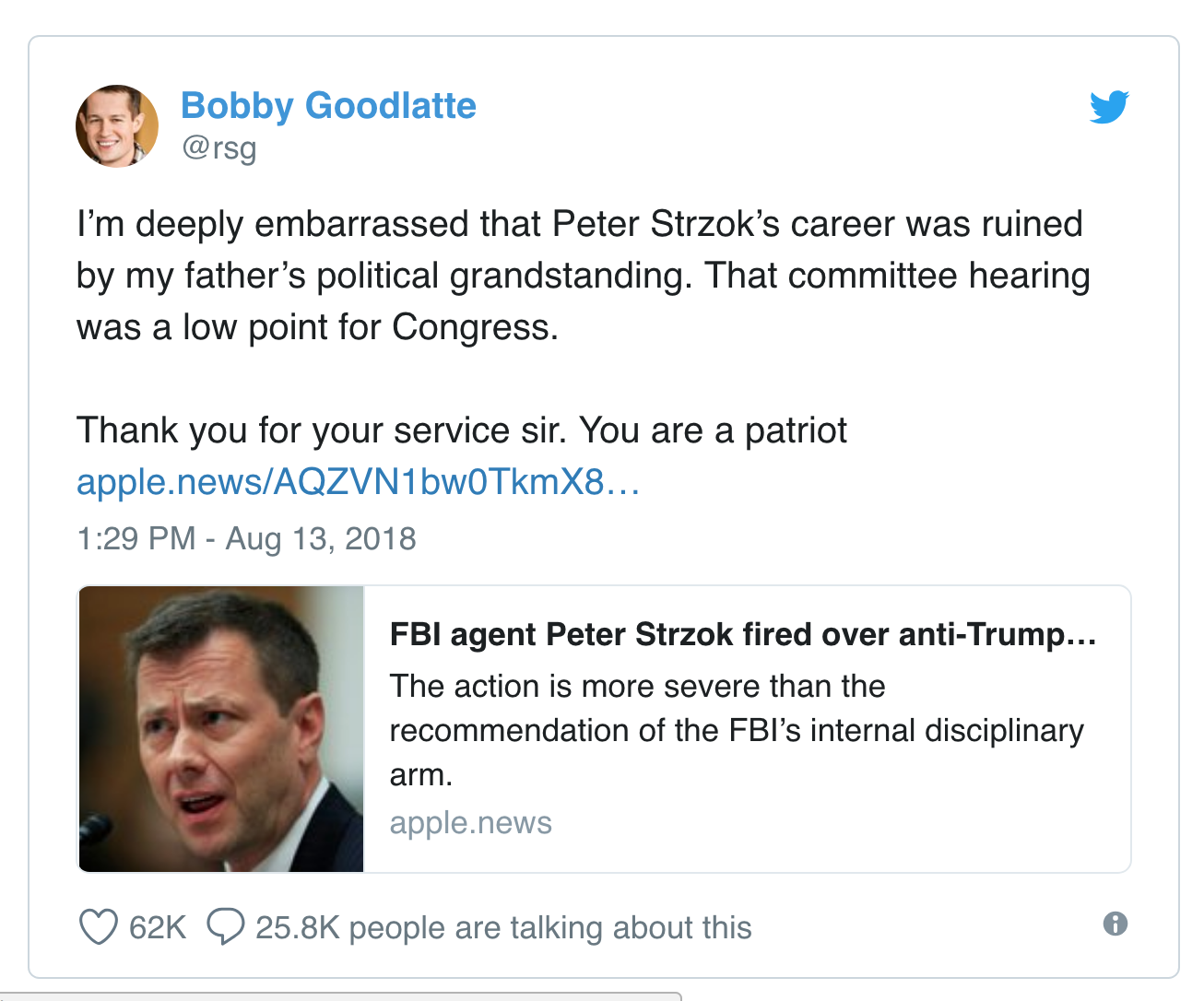 little booby is a liberal hack. just go to his facebook page and you can see he was or still is a Killary supporter. Poor Mr Goodlatte has to put up with this moron for a son.

How sharper than a serpents tooth is it to have a thankless child. To have a child ignorant enough to spout that drivel must be 10 times worse.

The crooked media from both sides should have stayed out of this one. It’s family. Strzok ruined his own career. Shame on Republicans that they refused to fire Strzok until the Collins corruption arrest pissed off Trump. My Republican Congress person has been nothing but an Ostrich regarding the firing of Strzok. I have complained for a very long time to him to fire Strzok, and I may as well been pissing upstream.

Sessions should indict Hillary. However, it will never happen because both Sessions and Trump would both then be indicted after they leave office if they dare indict Hillary. All the lies and media hype about indicting past elected office holders on that level is just plain BS. Never happen.

Right now, our President is lowering himself and the office he holds in a barking contest with what amounts to someone who was not worth mention in a “real presidential administration”. This fake administration being nothing but a lie, led by a used car salesman. He just cannot resist. It’s only importantant because it keeps the media from talking about the Trump lies and failures, such as his healthcare for everybody and Mexico paying for the Wall promises, and $1.5 BILLION a day we pay in interest on the Trump national debt.

Just like this Goodlatte thing was not worth mention.

This is a reflection of how much damage the left has done to the american culture.

The guiding influence of the values of the parent are being lost on the next generations. This is one of the most horrible things about the leftist take-over of our educational system. Bob Goodlatte is a good man. His son has not followed in his father’s footsteps.

Not lost, held in contempt. I’ve been to “educational” lectures where the lecturer asks “Is this really what you believe, or is this what you’ve been told by your parents to believe?” This is followed by a great deal of contempt for the parents, their positions, values, etc, as being old and outdated, and the idea that it is virtuous to believe the liberal positions the lecturer is selling.

There are people with differing political opinions in every family. Fortunately, most people are wise enough not to destroy their own family relationships over politics. The younger Goodlatte is simply making an ass of himself now.

Goodlatte the Younger obviously supports the party of the Ass. Probably makes him all proud to act like one.

The younger Mr. Goodlatte was one of the earliest employees of Facebook — a real job that came with real stock options. He’s almost assuredly far wealthier than his father, made his money in the private sector and ‘good on him’ for speaking up.

Speaking up for treason seems to be the lefts idea of virtue.

“One of the earliest employees of Facebook” is an overstatement. He started working there in 2008, when Facebook already had 850 employees.

The question is, how does a recent college grad get (what was at the time), one of the most sought after tech positions? Sure, he majored in computer science at Duke. But even today, Duke’s CS program is only ranked 52nd.

Simple: a company turning profitable and looking toward its IPO benefits by having the son of a congressman who–by they way–sits on the House Committee on the Judiciary. . .a committee which handles, among other things, intellectual property, competition, and the internet.

Wealth is measured in more than dollars. It’s being a decent person to his father who’s hard work got him to where he is.

IOW, he would not be where he is without the dad he despises.

Maybe he can hang out with Tim kaines son and the two rich white liberals can like, rage against the machine (that handed them everything on a silver platter) man?

The younger Goodlatte obviously has more money than good sense and is totally fine with the apparatus of government being weaponized against conservatives.

One last thing… Strzok did have to remind that moron Comey not to use the word negligent in his statements about Hillary and her server.. he’s smarter than Comey for sure.

For you Media Matter trolls who come here… negligent is the standard of law that gets you sent to jail. Go read the status dumb@##es… it is strict liability for negligently handling classified info.

Big tall moron used that in his first drafts of how they were going to dump the investigation, but Strzok stopped him.. so they came up with the nonsense that no grand jury would convict Hildabeast. I am guessing that was Strzok.

Wonder how Bobby Jr got his money. I am guessing through his Daddy’s contacts.

Ronald Reagan had a name sake who was (and still is) a big disappointment.

It’s a shame but we can’t control our children once they reach adulthood. I’m sure Congressman Goodlatte is very sad about his son and his views.

I’ve seen this kind of thing before… at some point the son will realize the err of his ways, I pray the father will be alive to see it.

Besides being a foolish statement, where is the family loyalty?

Guess the little leftist can kiss his inheritance goodbye.

What a shame. Bob Goodlatte is a good man, and doesn’t deserve this from his own son. There is a real rot in our culture when a son will do this to his father and be rewarded with such adulation. That kid should be ashamed of himself, regardless of his politics.

I would guess that this isn’t all that Bob might not like about his son. I wonder if Bob Sr. will attend his wedding.

Wedding? Some girl would marry this sniveling little creep?

This young lad is not likely to marry a girl.

Given his son’s attitude toward him, I doubt he is invited. It would be one more way for Goodlatte the younger to virtue-signal to his progressive buddies.

Just how does everybody know that Bob didn’t just tell the Facebook lobby his son was looking for an IT job?

I can tell you for a fact that Dave Brat can move in a matter of minutes regarding any Facebook issues. Minutes.

My money is on Bob got junior his job.