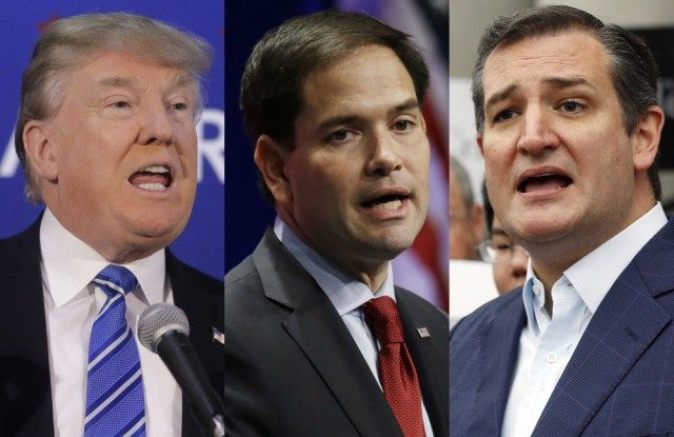 Primary Season has a deleterious effect on our opinions of candidates who, just six months ago, we might have liked, or at least not disliked. Marco Rubio has gone from a conservative Tea Party candidate, whoâ€™s bad on immigration and a bit of a NeoCon on foreign policy, to in the minds of some, a far left Republican Establishment candidate whoâ€™s sold his soul to the great and powerful Oz behind the curtain. Ted Cruz, who many viewed as too conservative or uncooperative to attract establishment votes, appears far more reasonable, down to earth, and cooperative, now that the Republican Party is faced with Donald Trump. Donald Trump, who, I believe fascinated most people at the beginning, has secured the unflappable hatred of a good 30% of all Republicans, as he treats their favorite candidates to mockery and mean-spirited jabs at their appearance, their religion, or their ethnicity.

The Rand Paul people are furious with Senator Ted Cruz, who somehow stole a bunch of the folks they were counting on for Paul â€“ I being one of them. But, in fairness to us Paul-People gone Cruz, it didnâ€™t take a rocket-scientist to figure out by early summer that Rand Paulâ€™s campaign wasnâ€™t going anywhere. His campaign has been a bit of a train wreck from the beginning.

For months I was baffled that no moderate or non-establishment Democrat could gain traction. Iâ€™m wondering, where are all the union guys? Where are the blue collar Democrats who hate President Obama and Hillary Clinton? Why arenâ€™t they looking for a Democrat candidate to support?

Finally it dawned on me that they have found their Democrat Candidate, only, that candidate isnâ€™t running as a Democratâ€¦ heâ€™s running as Donald Trump.

All that said, Trumpâ€™s candidacy daily softens my frustrations with Rubio, my disappointments in the Paul campaign, and my confusion concerning just how quickly Dr. Ben Carson disappeared from the limelight (some folks just canâ€™t handle it). I am a Ted Cruz supporter and volunteer, but as far as Republican candidates go, Rubio, Carson, and Paul are all better candidates than weâ€™ve seen in years past, excepting the Ron Paul Revolution of course.

And so, as I watch fellow Republicans struggle with their narrowed choices, I too struggle with the idea that Donald Trump could be the Republican Nominee. Itâ€™s really the only foreseeable outcome that upsets me. However, thatâ€™s my issue, as Iâ€™m sure you have your own, but the primary is taking shape, for better or worse, and it is time for all of us to choose between Trump, Rubio, and Cruz.

Let’s assume the segment is ‘Spanish-speaking’ (hence the Â¡Yeb!) as a category — not common ethnicity.

Only Cruz, Rubio, and Bush can be president because only they can get support from those that ‘hablo the espaÃ±olo??’