Robocalls in the 10th District

The tenor of the race for the Republican nomination to succeed retiring Rep. Frank Wolf (R-10) takes a turn for the worse with robocalls bashing Del. Bob Marshall (R-Prince William).

The campaign of Rob Wasinger has a lot to answer for. First it was the shady and underhanded smears of Barbara Comstock, initiated by Wasinger and perpetuated by his former press secretary. Then it was massive sock puppetry and the misinforming of Catholic media. Then it was ridiculous denials that he even knows anything about that former press secretary’s activities (though without acknowledging why he is a “former” press secretary). Now, it’s an “opposition research” hit job on Bob Marshall—first flogged relentlessly by that same staffer here on The Bull Elephant—that has made its way into robocalls targeted at 10th District Republicans.

The gist of the robocall is that Del. Bob Marshall has missed a lot of votes in his tenure in the General Assembly. The number of votes missed sounds like a lot, though we have no context to understand if it is a lot when compared to others, or even what percentage of his votes he may have missed. The call accuses Marshall of essentially taking a taxpayer funded vacation (i.e., that he’s being paid but not doing the work of a legislator). At the end, the call says that it is paid for by the “Patriots Fund.”

The call can he heard in its entirety here: 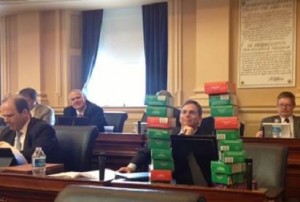 In terms of the merits of the accusations in the call, it always seems troubling when a lawmaker is absent, particularly when a reason for the absences may be related to pursuit of a different or higher office. In that sense it was an unfortunate coincidence that this morning, as these robocalls began to come to light, Bob Marshall was indeed absent from the floor of the House of Delegates. A stack of Girl Scout cookies sat in his place, brought by Del. Bill Desteph (R-Virginia Beach) to share with his colleagues.

Girl Scout cookies aside, we find it difficult to believe that Republican voters in the 10th district would think Bob Marshall is a lackadaisical legislator, or that he is in any way less than a strenuous advocate for them and their shared causes. The guy just works too hard at staying in touch with his constituents, and does too much for them in Richmond, for this line of attack to be perceived as anything but a smear. This just rings as hollow criticism to people who know Marshall and the dedication he’s displayed over the years.

Which brings us back to the campaign of Rob Wasinger, again. 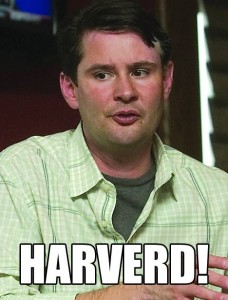 As with ALL of the other dirty negative attacks in this race, this one has Wasinger’s fingerprints all over it. First, to coincide with his announcement, Wasinger and his press secretary pushed a weak smear dossier masquerading as serious opposition research—a document we demonstrated originated from the staff of Michigan Rep. Kerry Bentivolio, where Wasinger had just resigned his position as chief of staff to make his 10th district run. Then, the Virginia blogosphere was beset by nasty sock puppetry (bordering on the psychotic) coordinated by his staff. [Asked later about the actions of his press secretary, Wasinger said he had no press secretary and disclaimed any knowledge of his activities, despite the fact that his official announcement press release listed the press secretary as his point of contact.] And now, Wasinger doesn’t have the guts to put his name on smears of Bob Marshall, so he has his friends do it for him.

Not only is the wording of the robocall lifted almost verbatim from similar attacks in the comments sections of blogs formerly haunted by Wasinger’s former press aide, but the organization claiming credit for the call, the Patriots Fund, has other apparent ties to Wasinger. The Patriots Fund is a independent expenditure PAC organized in Bentivolio’s home state of Michigan, and is run by an individual named Scott Greenlee. Not only does the PAC have ties to Bentivolio, but Greenlee coincidentally enough happens to “like” Wasinger’s campaign Facebook page. Hmmm. But I’m sure there’s no illegal coordination there, right?

So, in addition to having various of his former subordinates in the office of Rep. Kerry Bentivolio do his bidding in an underhanded way in this race, he now has a connected PAC with ties to Bentivolio and the Michigan political scene involved. At least now he has a real live Virginian supporting him, in the form of Michael Cogar, former Chairman of the College Republican Federation of Virginia. Wasinger touted Cogar’s endorsement with a URL reading www.robwasinger.com/_support_grows_for_wasinger. Unfortunately, this isn’t much of an endorsement; as reported by Justin Higgins: “Wasinger Touts Endorsement of His Own Campaign Manager.” Completely in line with the the whole astroturf strategy of his campaign.

Time and again, Wasinger has demonstrated little knowledge of (or respect for) voters in Virginia’s 10th District. Hopefully now that Wasinger has made a good staff choice in Cogar, Michael can clue him in to that reality. In the meantime, Wasinger should publicly disavow his sexist maniac former press secretary and his actions (including the “raging bitch” smear against Comstock), and come clean on engineering the shoddy hit pieces against Comstock and Bob Marshall that have come to mar this race.

Robocalls in the 10th District was last modified: March 4th, 2014 by Chad Ochocinco

I love how Wasinger touts his campaign manager as a “major” endorsement he received. In any event, this guy is a big jerk. IF he ever shows up at any TEA Party or GOP event I hope he gets booed all the way back to Kansas.

Wouldn’t it be sad if his own campaign manager didn’t endorse him? I thought it was a given that anyone’s campaign staff would actually support the candidate they work for, but perhaps that was a bad assumption on my part. There’s always something to learn in the world of politics!

Wasinger is obviously the Tareq Salahi of Virginia politics. He has zero credibility.

The man has a lot to answer for, but apparently he’s afraid to face voters and in hiding. How can you represent people you won’t even talk to? I think Wasinger has earned the title of the Salahi of Virginia! Maybe Salahi is another one of his alter egos, as Weineberg, John Scott, etc. You have to give him credit for sock puppetry at its finest.