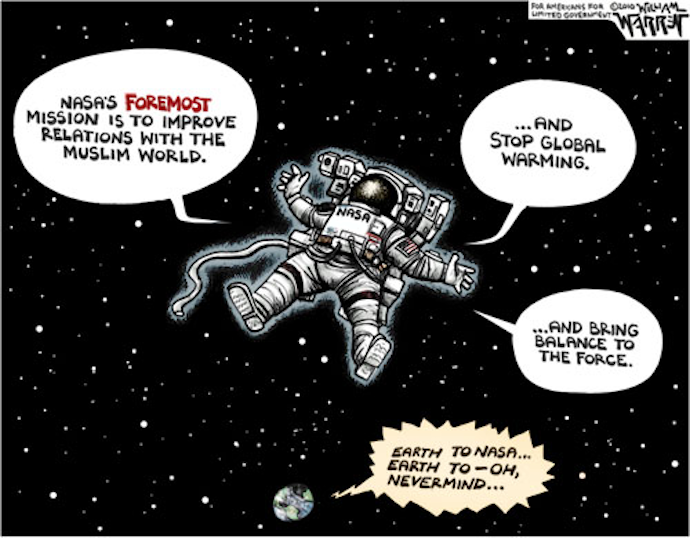 Liberal media are touting the prevalence of @RogueNASA and @AltEPA, Twitter pages aimed at delegitimizing the Trump administration; but these accounts are treading a thin legal line and simply acting as a liberal microphone.

The drama apparently began when the National Park Service’s official Twitter account was temporarily shut down by the Trump administration after it engaged in political tweets against Trump.

In an apparent response, Death Valley National Park, a government managed federal park, took to Twitter to seemingly comment on President Donald Trump’s proposed immigration policies on Jan. 25. The Death Valley Park Service tweeted a picture of a Japanese man sent to internment in the 1940s with a quotation advocating for looser immigration restraints.

The Death Valley Park Service’s decision to tweet immigration advocacy rather than their usual traffic updates and facts about flowers has spurred government employees from several other agencies to similar sponsorship of the cause.

The same day, accounts such as @RogueNASA, @AltUSNatParkSer, @AltEPA and @Alt_NASA started popping up, all claiming to be run by active or former employees of their respective departments in order to act in resistance to the Trump administration.

For example, on Jan. 25, @RogueNASA tweeted, “How sad is it that government employees have to create rogue Twitter accounts just to communicate FACTS to the American public?”

As these pages attempt to replicate the existence of real national park accounts, several have taken official logos and avatars from their official agency counterparts. Yet government trademark laws such as 18 U.S.C. Section 701 specifically prohibits the use of government insignia on non-government websites and pages.

That law states, “Whoever manufactures, sells, or possesses any badge, identification card, or other insignia, of the design prescribed by the head of any department or agency of the United States for use by any officer or employee thereof, or any colorable imitation thereof, or photographs, prints, or in any other manner makes or executes any engraving, photograph, print, or impression in the likeness of any such badge, identification card, or other insignia, or any colorable imitation thereof, except as authorized under regulations made pursuant to law, shall be fined under this title or imprisoned not more than six months, or both.”

While the copyright and trademark law does provide latitude for instances of parody however; As Kalev Leetaru explained on Forbes.com on Jan. 25, “The accounts in question have positioned themselves less as satiric and humorous parodies of the official accounts they mimic, but rather as resistance accounts that purport to offer the true story of those organizations. In particular, the accounts have positioned themselves in their tweets as alternative authoritative resources for those interested in their respective agencies’ research, replacing the official accounts.” This led several accounts to switch to new images.

This is a desperate attempt by liberal, apparent, government employees to resist Trump’s authority and dismiss his policies on immigration, energy, and the environment.

The worst part, as Leetaru notes, is that it is unknown if these are actual government employees from any of these agencies. They could be fakes. Although since they used real agency logos, even briefly, that would still probably violate the statute.  It could be anyone hosting these “rogue” Twitter pages and, still, social media has given them a platform.

Politico writer Nancy Scola believes that the National Park employees felt particular angst surrounding Trump’s election due to his stance against EPA’s policies designed to combat climate issues. Unfortunately for these employees, Trump is president. And while they have the privilege of working for the federal government each day, thousands of Americans have been struggling due to the regulations of the Obama Administration. By whining on social media about the election, they are delegitimizing the plight of every American who lost their job because of government policies.

The presence of these rogue accounts is not only legally dubious, it demonstrates a larger problem of bureaucrats out of control — who believe they are entitled to their positions of power. This is legitimate not whistleblowing, it’s a temper tantrum.

Ironically, the whole controversy underscores the reason while millions of Americans voted for Trump to drain the swamp. Liberal government employees may believe they are creating a resistance, but in reality they are only resisting the positive change that the American people have been asking for to get the economy moving again.

All these types of jobs can and should be move to a different area in the USA.
If these people work say in Maryland, move job to Arkansas ?
They can and do this all the time in the government world.
They re-write there job also,

We have a new AG in town, buckle up for the giddy up.

The general rule of thumb once the boss makes a decision:

Get on board with the program.

Playing subversive is a good way to get your azz thrown in jail.

This doesn’t have anything to do with the gop. You try subverting your boss and see what happens. The government rules are worse.

if it is mentioned on this site, it is definitely GOP related.

If you want to exercise your right to free speech, you have to first resign. See.. the Executive Branch officials that are the Acting AG are not there to exercise their own personal judgement and squawk about it.

this article is not about the AG, is it. It is about career workers who know a thing or two. No need to resign at all. As long as you are speaking as a individual and not as a representative of the agency, what is the harrn – beside showing the world what a buffoon Trump is?