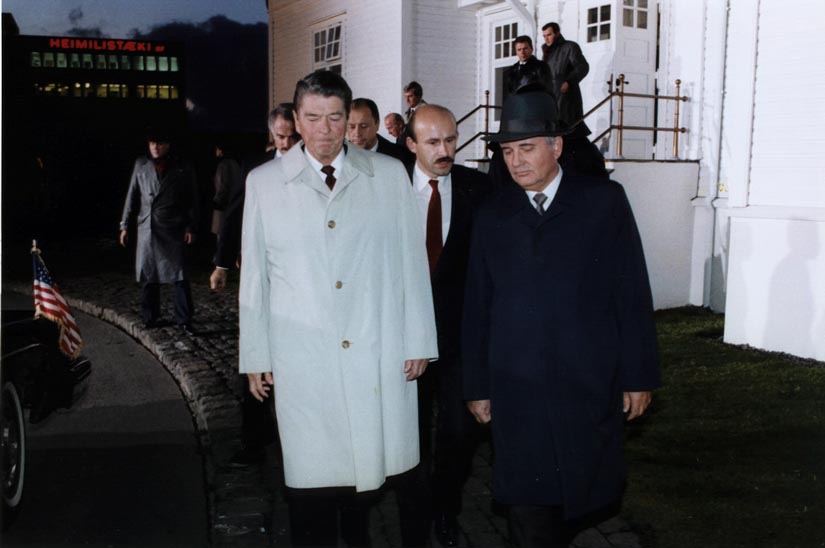 President Reagan walks away from U.S. - Soviet negotiations in Reykjavik, 1986.

[I had the honor of speaking at the annual Reagan Dinner for the Rappahannock County Republican Committee on April 22nd. This is a portion of my prepared remarks on President Reagan’s foreign policy legacy. MG]

In 1946 Winston Churchill and Harry Truman traveled by train to Fulton, Missouri. It was there that Mr. Churchill first warned of a new, hostile and evil threat to Western civilization; Soviet communism.

“From Stettin in the Baltic to Trieste in the Adriatic,” Mr. Churchill famously said [listen to excerpt here], “an iron curtain has descended across the Continent [of Europe.]”

A little more than thirty years later, the reality of Mr. Churchill’s warning reached critical mass, as the unrelenting aggression from the Soviet empire seemed destined to out-wit and over-run the West, and drag the democracies by stealth and deceit into the very darkness they had so narrowly escaped in the Second World War.

First there was the Korean stalemate, then Vietnam hung around the nation’s neck like a bad foretoken; 56,000 Americans had been sacrificed, for what? For a political war that did not solve any objective, rather only gave way to the mass murders of millions of people in Southeast Asia.

In the national disquiet, fueled by the well-organized (and in some cases Soviet funded) revolutionary Marxist and communist groups taking violence to American campuses and streets – somewhere in this mix the post-World War II consensus of foreign policy and the promotion of national self-interest, first and foremost, was lost.

American drifted into what I call an “accommodationist” foreign policy, where academics, policy makers, politicians and Presidents, to one extent or the other, began to see their role as less about American self-interest and more about accommodating the national interests of other nations – in the hope that that policy would purchase goodwill as though it were a trinket, or inter-relationships that would forestall aggression and bullying.

And in regards to the nations behind the Iron Curtain, this accommodation became a policy of subtle appeasement, where it was easier to give away little things in hopes of averting larger consequences.

Like any generalization, this idea of accommodation isn’t water proof; there are exceptions and the occasional step back. However, in large part I believe, at least, this was the officially practiced statecraft of post-War II America that in my judgement encouraged our enemies and lost the confidence of our friends.

It allowed an unblushing President Carter to publicly scorn our “inordinate fear of communism.”

Enter Ronald Reagan. The Realist. He had prepared well; over the decade between 1970 and 1980 he developed what would later become officially the Reagan Doctrine centered on exposing the Soviet threat, building superior US military power, trusting the superiority of capitalism, and reasserting national interest, among other points.

At the most crucial hour, at the last moment, and with providential grace, two great leaders came to power only a few years apart; Prime Minister Margaret Thatcher, and President Ronald Reagan.

It is no exaggeration to state that they, with Pope John Paul and others, saved the Western World as we know it.

Mr. Reagan firmly believed that the Soviet Empire would crash from its own internal contradictions when it was confronted with the truth of a self-confident, well-armed, and prosperous US that refused to accommodate their worst behaviors.

The realist President Reagan was tested from his first day in office, of course.

Early on, he stood against the gale force winds of protest and condemnation throughout Europe, to install upgraded Pershing missiles in Germany in response to the earlier Soviet buildup of medium range nuclear missiles. This came after failing to get the Soviets to the negotiating table.

Ronald Reagan refused to back down.

One specific event among many stands out that may have done more than any other to cement this new “Reagan Realism” into place for all to see. It sent shock waves around the world.

In 1983, while President Reagan was actually at Augusta National Golf Club in Georgia for a weekend, he received an urgent message from six Caribbean countries warning that the Marxist government in Granada had fallen into internal fratricide – and the bloody internal war could involve the Cuban military already on the island and endanger the worried neighbors. In addition, over 500 American students living on the island were potential hostages.

Without hesitation or extensive consultation throughout the foreign policy establishment, and even defying his friend, Margaret Thatcher, the President and his advisors deftly organized a rescue – and in almost complete secrecy U.S. Army Rangers and Marines liberated Granada, in a swift action that killed over a hundred Grenadian and Cuban troops and cost 19 American lives.

The world was furious; Ronald Reagan offered no apologies. Not one.

The Congress was stuck in fear and fake indignation and the media was outraged by not being included, but soon it was very apparent that the clear, decisive action enjoyed overwhelming public support, and renewed pride, as evacuated American students kissed the tarmac at airports and showered praise on the US military that had rescued them.

[As an aside, I had the privilege of writing a monograph in 1984 for the US Government, The Foreign Policy of the People’s Revolutionary Government of Granada, using the cache of captured documents from the island, and also countered Speaker Tip O’Neil and others in the media about the lies being told about the liberation.]

President Reagan set out and followed a clear course of non-apologetic policy, which included consistent unrelenting public pressure on the Soviets, which included telling the plain truth in his genial manner about the communists and their evil system. The truth, he believed, was the West’s most powerful weapon.

Personally, I believe Ronald Reagan’s finest hour – and one of the great moments in the history of the American Presidency – was with Mikhail Gorbachev, the Soviet Secretary, in Reykjavik in October of 1986. The President, Mr. Gorbachev, joined only by the Secretary of State and the Soviet Foreign Minister, discussed, haggled and negotiated their way through a variety of standing positions, including the so-called zero-zero option for removing nuclear weapons from Europe. Just as a set of extensive agreements were to be finalized after days of intense meetings, Gorbachev threw in the ringer – demanding that the Strategic Defense Initiative (SDI) be abandoned as a prerequisite for the other items that had already been agreed to.

President Reagan realized that the Soviets had gone through the process just to get to what they feared the most – a technological arms race that would allow the US to shoot down incoming warheads – a price the faltering empire could not afford to pay.

The realist – to the utter shock of Washington – walked away from the negotiations with a furious public frown, determined to double down on his covert economic campaign and to escalate his public pressure on the Soviets.

The outcome of Reykjavik, perhaps like no other single event drove the collapse of the Soviet Empire only a few short years later.

By the following summer, convinced that the Soviets teetered on the brink of collapse, the President went to Berlin and defied virtually the entire foreign policy establishment with a powerful speech challenging the Soviet empire. Standing in front of the Brandenburg Gate [listen here] he pushed hard:

”Mr. Gorbachev, tear down this wall!”

Those of us here tonight stand as keepers of the living memory of the Reagan era. We are the touchstones for history; and as these great leaders stood guard in the darkest hours of the last century, the task now falls to us to help the emerging generations of this young century by recalling, reminding and building upon the greatness we were honored to have witnessed and in which we were privileged to have had a small part.

Ronald Reagan the Realist was last modified: May 2nd, 2017 by Michael Giere