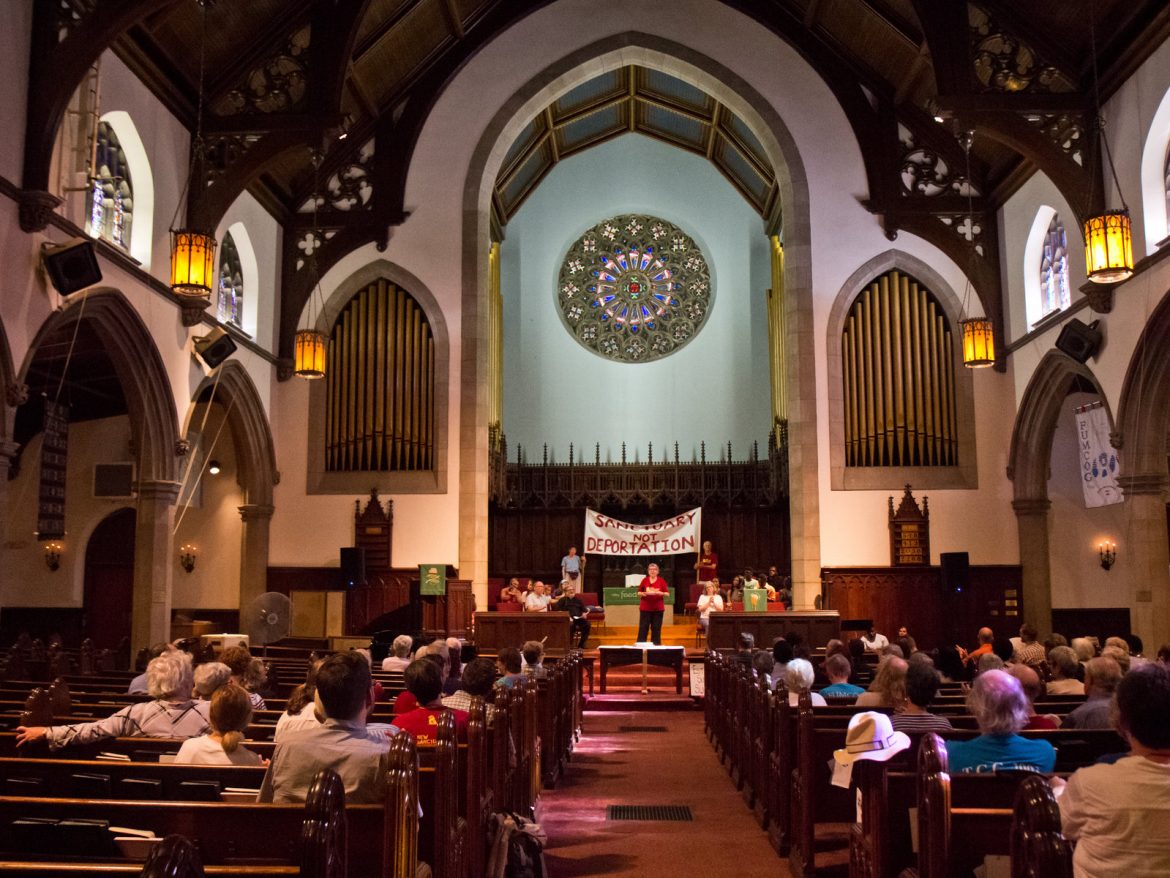 The concept of sanctuary is recorded in the Bible as part of King Solomon’s temple – it is a holy place.  The written definition of sanctuary in the Christian church is found in the 4th century AD in the works of St. Eusebio, the first bishop of Vercelli.  The more modern and legal definition of sanctuary came about in medieval England between the 12th and 16th centuries when it was defined both religiously and secularly.

Sanctuary was applied to those accused of crimes who were fleeing secular justice.  Essentially, once a fugitive entered the sacred boundaries of the church, they were beyond capture for a short period of time.  Sanctuary provided protection from the king of England, and was used to avoid both criminal and political problems. By postponing punishments it allowed time for alternative legal remedies to be reached.

Sanctuary in the United States is first and most clearly associated with the Underground Railroad that helped slaves escape slavery.  Later it became a mechanism for use in the civil rights movement, and many churches granted sanctuary for oppressed people. (Churches are still places of sanctuary in modern America.)

The first sanctuary city was created in 1971 when Berkeley passed a resolution of sanctuary. Other cities followed suit through the 1980s and sanctuary concepts are still being created and changed throughout America.  At this point the total number of sanctuary states, counties and cities in the United States is in the thousands. All refuse in some manner to honor federal immigration law enforcement.  Some work vigorously to prevent and obstruct the detention of any illegal aliens.

Most of the sanctuary areas in the United States are governed by Democrats.  Thus, not only is the sanctuary movement an anti-law movement it is also a political movement being used against those who support the rule of law and not the arbitrary and politically correct avoidance of it.

What is happening in Virginia today is an example of how the arbitrary abuse of the law associated with sanctuary creates chaos.  There are numerous cities and counties in Virginia that have sanctuary for illegal aliens. But now there is another sanctuary question – what about sanctuary for citizens who own guns?  There is a significant gun ownership sanctuary movement underway based on the right to self-defense, the right of property, and the right of due process (which are all part of the Constitution’s Bill of Rights.)

Interestingly, the Democrat leadership which is to take charge of the Virginia House and Senate, supports illegal aliens and opposes the rights of citizen gun owners.  Their argument is that gun violence requires extreme gun control measures, and that there is no relationship between sanctuary for people in the country illegally and sanctuary for citizen gun owners.

Regardless of your thoughts on illegal alien sanctuary and citizen gun sanctuary, this is chaos in the making.  Once the rule of law becomes meaningless, then the state and the nation are in retreat from the constitutional foundations that has made us free and prosperous.  Will we as citizens accept the tyranny of an overreaching government or fight against it. Time will tell.