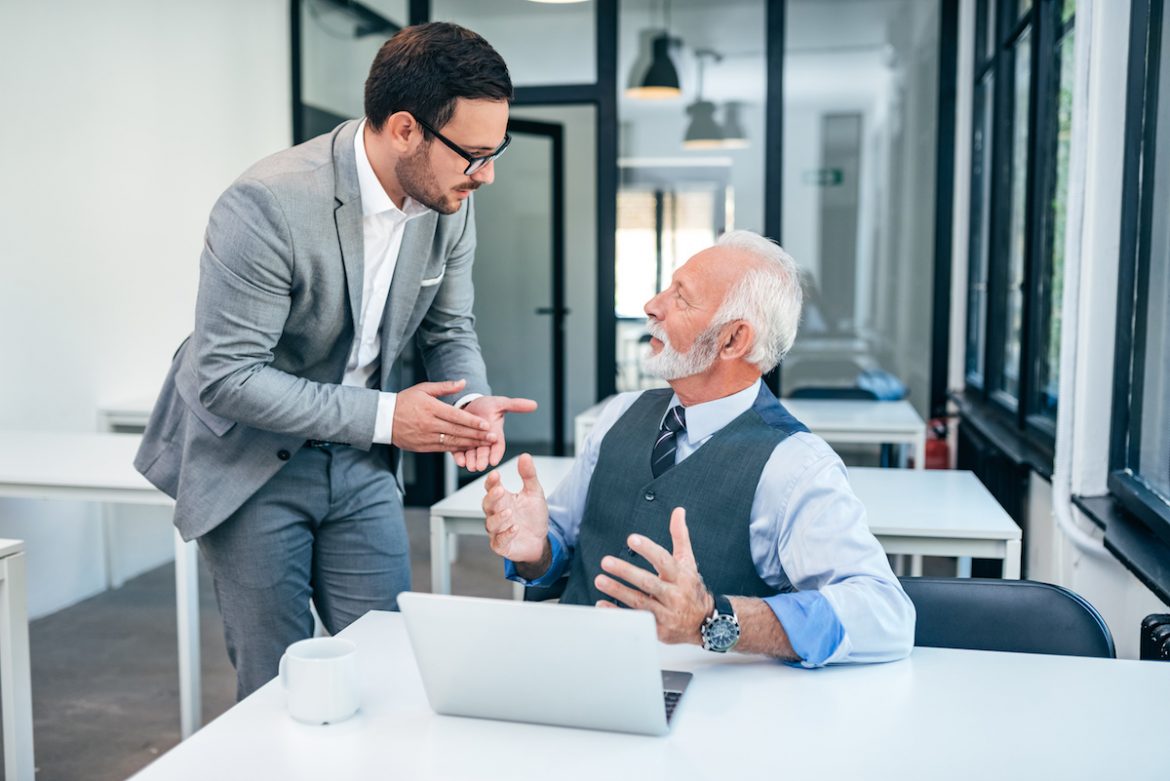 Saying ‘OK, Boomer’ may lead to lawsuits against your employer in Virginia

Thanks to laws against “hostile work environments,” saying “OK, Boomer” in the workplace can get you fired, notes human-resource professional Suzanne Lucas. That’s because it expresses prejudice based on age, and thus contributes to a hostile work environment for older workers. Under federal law, conduct is illegal when it creates a “hostile or abusive working environment” for people based on their age, race, sex, disability, or other protected characteristic. (See, e.g., Young v. Will County (1989)).

A bill that is likely to become law in Virginia may expand this liability further. It would make employers liable for work environments that are hostile or “offensive,” based on age, race, sex, sexual orientation, religion, disability, or marital status, defining that as “workplace harassment.”

Being told “OK, Boomer” could certainly be “offensive” to an older worker, so employers could be sued when someone says this phrase to someone else in their workplace. I agree that there should be remedies for severe age-based harassment, and as an older person, I would not like to repeatedly be taunted with “OK, Boomer.” That would be abusive.

But I do not like the bill’s statement that an “offensive work environment” is a basis for finding “workplace harassment” or “sexual harassment.” In my opinion, offensiveness — as opposed to abusiveness or hostility — should not be a reason to restrict speech. As the Supreme Court noted in striking down a ban on flag-burning, “If there is a bedrock principle underlying the First Amendment, it is that the government may not prohibit the expression of an idea simply because society finds the idea itself offensive or disagreeable.” (See Texas v. Johnson (1989)). The fact that your co-workers periodically say offensive things — that gradually add up to an “offensive work environment” — should not be a reason to sue your employer. (There are admittedly EEOC sexual harassment guidelines that use the word “offensive,” but EEOC harassment guidelines do not have the force of law, as courts have explained in cases such as Garcia v. Spun Steak Co. (1993)).

Even institutions subject to the civil-rights laws — like state colleges — can’t necessarily ban speech just because it offends employees or students. In 1995, a federal appeals court struck down as a violation of free speech a racial harassment policy that banned “any intentional, unintentional, physical, verbal, or nonverbal behavior that subjects an individual to an intimidating, hostile or offensive educational, employment or living environment by … (c) demeaning or slurring individuals through … written literature because of their racial or ethnic affiliation.” (See Dambrot v. Central Michigan University (1995)(emphasis added)).

Still, federal law does ban conduct (including jokes and insults) that create a “hostile or abusive work environment” for members of protected classes. The Supreme Court has so stated, in sexual-harassment rulings such as Harris v. Forklift Systems (1993). Such conduct can constitute illegal harassment as a result.

So employers that want to avoid lawsuits already have a good reason to ban employees from saying “OK, Boomer,” notes Ms. Lucas:

[I]f you have an employee, of any age, dropping the “OK, Boomer” line against any employee who is over the age of 40, you have to take it seriously. You can’t dismiss it as a harmless banter. Just the same way you wouldn’t dismiss it if someone said, “OK, Mexican.” It doesn’t matter whether the employee is a Mexican or not, or whether the target of “OK Boomer” is a Baby Boomer or not. One time is a joke, but it can lead to patterns that create a hostile work environment, putting the company on the receiving end of a lawsuit.

So, you counsel that employee, and if it doesn’t stop, you terminate the employee. You’d do the same for someone who continued to mock someone because of their race.

I know there will be people saying, “You can’t take a joke!” I can. What doesn’t take jokes is the law. So, if you want to take this catchphrase into the office, it may be the last thing you say at work.

So employers have a reason to regulate workplace speech. And the pressure to restrict such speech will be even greater under the Virginia bill, known as the Safe & Thriving Workplace Act (SB 1360 /HB 2155). Federal law limits total damages for “harassment” to $300,000 or less, depending on employer size. But the Virginia bill, which was approved by a state senate committee on January 27, permits unlimited compensatory damages, and up to $350,000 in punitive damages, against even the smallest employers subject to state antidiscrimination laws (with as few as 5 employees).

The bill also encourages juries to find employers liable in close or ambiguous situations, because it contains language saying that:

“the conduct … may include …. verbal, pictorial, audio, or visual conduct”

But the location where conduct happens is in fact very relevant to whether it creates a hostile or offensive work environment, so it is misleading for this language in the bill to suggest that conduct is “harassment” “regardless of whether” it “occurred outside of the workplace.”

Courts have often noted that inappropriate behavior is much less likely to be sexual harassment when it occurs outside the workplace, because such conduct has much less impact on the “work environment.” As Judge Barbara Crabb ruled in one sexual harassment case, “Even top level executives are entitled to make fools of themselves after work and on their own time.” (See Alvey v. Rayovac Corp. (1996)).

Punishing speech that is not aimed at the plaintiff can cause additional problems under the First Amendment. Yet, the bill states that the employer can be liable for “workplace harassment” or “sexual harassment” even if “the complaining party is” not “the individual being harassed” or “the conduct is also experienced by others outside of the protected class involved.”

This may lead to universities punishing professors for academic speech protected by the First Amendment that is not even aimed at an offended colleague. The fact that your co-workers periodically discuss racial or sexual issues that offend you should not be something you can sue over under the theory that it creates an “offensive work environment” for you.

In 2010, a federal appeals court dismissed a racial harassment lawsuit against a professor for his recurrent racially-charged emails about immigration. It found that the lawsuit against him for creating a hostile work environment was barred by the First Amendment, where his emails were not aimed at the particular Hispanic college staffers who sued him. (See Rodriguez v. Maricopa Community College District (2010)).

Similarly, that court earlier overturned on First Amendment vagueness ground a professor’s discipline for sexually-themed lectures that created a hostile learning environment. His lectures — which were given to both men and women, and not aimed at women, the “protected class” — fell within the “ambiguous outer reaches” of the college’s harassment policy, but his lectures were not so clearly or flagrantly harassing or discriminatory that he had fair notice that they were forbidden by the policy. The policy, like the Virginia bill, banned verbal conduct of a sexual nature that creates a “hostile, or offensive” environment. (See Cohen v. San Bernardino Valley College (1996).)

These bills also creates problems by stating that “conduct may be workplace harassment regardless of whether … the conduct is also experienced by others outside the protected class involved.” Its ban on “sexual harassment” only contains language requiring that the conduct be of a “sexual nature,” not that it be based on the victim’s sex. By contrast, under federal law, coarse or sexually crude remarks are not illegal if they affect men and women equally. The federal appeals courts have rejected lawsuits where sexual rumors fostered a hostile environment, but did not target an employee based on his or her sex. (See, e.g., Pasqua v. Metropolitan Life Ins. Co. (1997); Duncan v. Denver (2005)).

This language in the bill will encourage juries to find liability in some cases where nothing discriminatory is going on, and may lead to liability for speech that is protected by the First Amendment, because the state of Virginia lacks a compelling interest in restricting it.

The government has a compelling state interest in eradicating discrimination, but not in banning offensive workplace speech that is not discriminatory — or is not severe and pervasive.

The Virginia bills’ text does not contain the words “severe” or “pervasive.” Campus sexual harassment codes that lacked the words “severe” and “pervasive” were struck down as violations of free speech in Saxe v. State College Area School District (2001) and DeJohn v. Temple University (2008)).

The fact that a work environment is “offensive” or even “sexually offensive” does not always mean that the government has a valid reason in restricting the speech that makes it so. For some employers, such as the producers of TV sitcoms, offensive speech such as sexual humor is a necessary part of the workplace, even if some listeners view it as “harassing” — as Justice Ming Chin of the California Supreme Court discussed in his concurring opinion in Lyle v. Warner Bros. Television Productions (2006). That case involved a work environment that was sexually offensive because writers of a TV sitcom would tell sexual jokes they came up with, before selecting some of those jokes for use in the TV sitcom “Friends.” The sexual jokes were thus a part of the creative process of producing the show. A female writer’s assistant got sick of witnessing the constant offensive sexual humor and sued over it after it impacted her work environment. Warner Brothers raised a First Amendment defense to liability.

Confronted with a work environment that was full of sexual humor and innuendo — but for nondiscriminatory reasons —  the California Supreme Court read a “based on sex” limit into California’s sexual harassment statute, in Lyle v. Warners Bros. That required the plaintiff to show she was harassed based on her sex. It did that even though that California statute, like the Virginia “harassment” bill, does not specifically state that a work environment has to be hostile or offensive based on the victim’s sex to be sexual harassment — only that it be of a “sexual nature” — and even though California appellate courts had previously allowed workers to sue even if sexual harassment afflicted people for reasons other than their sex.

The plaintiff couldn’t meet the judicially-imposed “based on sex” requirement, because her work environment, even though full of coarse sexual humor, was not hostile to her based on her sex. So the California Supreme Court dismissed her lawsuit. By doing so, it avoided having to address the employer’s First Amendment defense, which was backed by many civil-liberties groups, like the Foundation for Individual Rights in Education, and the Center for Individual Rights.

Perhaps the Virginia courts could do the same thing to the sexual-harassment provisions of the Virginia bill, that the California Supreme Court did to California’s sexual harassment law: read a “based on sex” limit into it, to reduce its conflict with the First Amendment. That would make sense. Avoiding First Amendment problems is a valid justification for interpreting a harassment statute more narrowly, under the “constitutional avoidance canon” of statutory construction.  For example, the courts interpret labor laws narrowly when that would reduce the likelihood of violating religious freedom or free speech. (See, e.g., NLRB v. Catholic Bishop of Chicago (1979)).

Saying ‘OK, Boomer’ may lead to lawsuits against your employer in Virginia was last modified: January 28th, 2021 by Guest Contributor Hans Bader