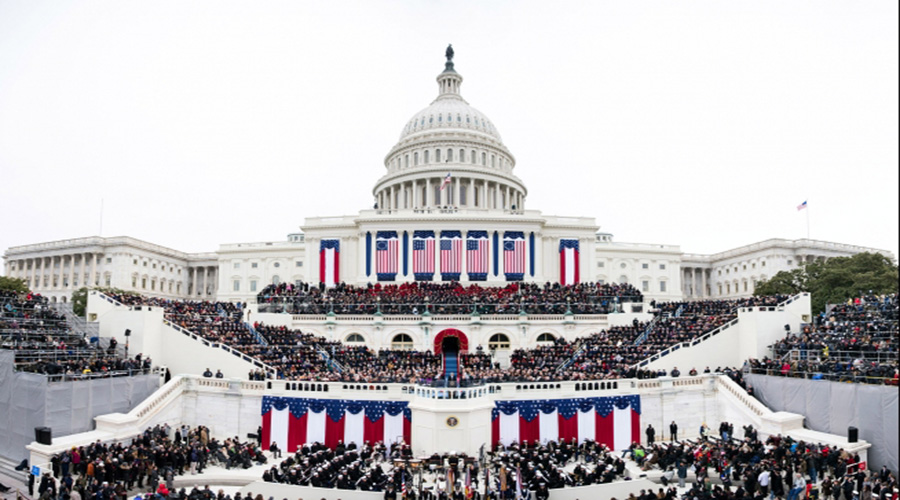 The Inauguration is a week away. After what Obama did to the Cubans today, it can’t come fast enough. Doesn’t Obama realize his executive orders will be overturned in a week?  SMH

The Inaugural celebration begins on Thursday morning January 19th with a wreathe laying ceremony at Arlington cemetery followed by a “Make America Great Again” (the theme of the weekend) celebration at the Lincoln Memorial.  One Inaugural Ball will be held that evening hosted by the Great America Alliance. More on the Ball here.

The Inauguration begins at 9:30am on Friday the 20th. For the 250,000 people with tickets the gates will open at 6:00am to begin security screenings. There’s a long list of things you cannot bring into that area.  Those without tickets, all 500,000 of them, can stand on the mall behind the invited guests. Tickets for all Inaugural events here.

Following the Inauguration, and lunch at the Capitol, will be a parade down Pennsylvania Avenue to the White House.  In the parade will be 8,000 participants from 40 organizations. This parade will be shorter than past Inaugural parades because Trump has work he wants to do before the evening Balls.

Thursday and Friday nights there will be many different celebratory Balls including the Deploraball. The list of unofficial Balls can be found here. There will be three ‘official’ balls which means Trump and/or Pence will be in attendance. Two of those Balls will be for people from across the country. Both will take place at Walter E. Washington Convention Center.  A third official Ball, Salute to Our Armed Services Ball, will be held at the National Building Museum. That ball is by invitation only. More on the Balls and tickets for the Balls here.

Fairfax County Government has things you should know about the Inaugural weekend whether you are attending Inaugural events or not.

On Saturday January 21st a group of women, estimated to be 150,000, will go to the Mall in their little pink pussyhats to protest Trump’s Presidency. I have no idea what this march is supposed to accomplish but I’m sure they’ll have fun. More on the march here.

saw the following on Dan Rathers FB page. Such a scary shame that anyone believes Trump is the savior

“Perhaps the conservative political commentator Bill Kristol said it best in one of his tweets:
‘It’s telling, I’m afraid, that Donald Trump treats Vladimir Putin with more respect than he does John Lewis.'”

that’s your take away ? Not that you golden boy is a twit?

I ain’t no ways tired yet.

Lewis’s bio sells out on Amazon.

Remember back when Michelle Obama put a vegetable garden on the White House lawn and you rightwingers went all nuts??

And now you stand silent:

According to Melania Trump’s makeup artist Nicole Bryl, the Trump
transition is already talking about making a designated “glam room” in
the historic home to accommodate “hair, makeup, and wardrobe,” . . .

What’s next? Convert the Lincoln Bedroom into a “Golden Showers” room?

Perhaps someone can explain to me why the Commander of the DC National Guard . . . a presidential appointee . . . is being replaced on January 20 . . . just as DC NG troops are providing security, traffic control, and the like for the inauguration?

More pettiness on the part of That Man.

Because it’s a presidential appointment? Maybe the guy resigned or was holding his breath in protest, these are your people, you should know this.

Your previous post was deleted. We don’t support that kind of trash here. You’ll have to take your trash talk to a Democrat site. We’re conservative and we do not talk like that.

“We’re conservative and we do not talk like that.”

Keep telling yourself that.

You do not want me to start quoting conservatives.

The American Dream Team is being assembled for our Executive Branch

You write: “On Saturday January 21st a group of women, estimated to be 150,000, will go to the Mall in their little pink pussyhats to protest Trump’s Presidency. I have no idea what this march is supposed to accomplish but I’m sure they’ll have fun.”

A characteristic of you rightwingers is you disparage and mock what you fear. Why are you afraid of these women?

Also, contrary to what Trump claims, DC dress shops are not sold out of “inaugural gowns.”

Hmm, where to start.

1) Did you even click the link ? It was a female feminist journalist making fun of the hats, not the OP on this thread, not exactly a bastion of “rightwingers” over there at the Washington Post.

3) You say “A characteristic of you rightwingers is you disparage and mock what you fear.”. You mean like the following video from a leading Progressive voice showing off all that Progressive tolerance towards women she doesn’t agree with ? Women I know who voted Republican think this is a riot, they laugh their asses off at stuff like this.

Why would I be afraid of a bunch of women dressed like little girls? Marches never accomplish anything although young people do enjoy them.

There’s no such thing as an Inaugural gown. Most women own a gown or two.

so why would you support a guy like Trump who lies about such little stuff? I can accept the big lies but he disrespects us all with this screwy ones. yet, you worship him?

I did not vote for Trump. He has earned my full support for his incredible transition team (especially Trent Loos) and smart Cabinet picks.

I don’t give a hoot what he says about dresses and I can’t imagine why you do.

Because I have high expectations for the position including keeping the focus on the big issues and fixing the big problems. Not being a petty twit.

But you still love the guy?