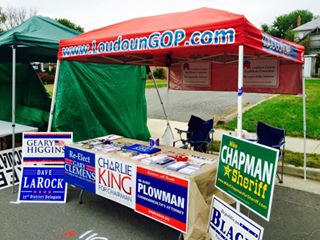 written by Guest Contributor Eve Marie Gleason November 2, 2015
In a press release this morning, Scott York asked me and other local Republican activists to provide cover for himÂ amid allegations of campaign finance improprieties.

When a person makes a donation in Virginia, it is the responsibility of the campaign to make diligent efforts to collect certain information about the donor and to report the donation. Failure to do so compromises the integrity & transparency of our system.

The Leesburg DemocratÂ running against Mr. EstradaÂ has switched parties. Scott York has done so 4 times! York also zealously investigated allegations of impropriety made against a fellow supervisor, yet appears unwilling to face similar scrutiny himself. All of this begs the question: is Scott York willing to put the interests of Loudoun citizens ahead of his personal interests.

York’s suggestion that I defend his reputation relies on the dubious assumption that his record and character are as unassailable as Republican Supervisor candidate Will Estrada’s.

Voters of goodwill can easily recognize that the Estrada allegations shouldÂ be dismissed as nothing more than the eleventh hour graspingÂ of a careerÂ politician facing unexpectedly strong opposition.

The campaign finance allegations against Mr. York need to be investigated further by the State Board of Elections or by a Commonwealth’s Attorney.

And Scott York should be ashamed of this desperate attempt to associate himself with the good name of Leesburg Republican Board of Supervisor’s candidate Will Estrada.

We can do better, Loudoun County! Here’s a warm invitation to allÂ Republicans, Independents, and independent minded Democrats to join me in voting for our great Republican team at the polls tomorrow.

Eve Marie Barner Gleason has been active in the Republican Party since she was 11 years old. In 2012 Eve Marie was elected to the 10th Congressional district convention after having served as secretary of the 10th district committee for two years. Previously, she served in unit leadership as a precinct captain, magisterial district chair, and vice chair of the Loudoun County Republican Committee. Until recently Eve Marie served on the 10th district committee of the State Central Committee where she chaired the party plan review committee, where alterations to the basic governing document of the state party are considered. ï»¿

Actually, now that I re-read Scott’s press release (linked below. I accidentally used the wrong link in the last comment) I see that this article must be referring to another source also. He obviously doesn’t ask anyone to “cover for him amid allegations of campaign finance improprieties” in this particular press release, but the stuff about Estrada is in here:

You couldn’t be more obvious. Thanks for helping a Republican opponent win. Your efforts won’t be forgotten.

I have literally no idea what you’re talking about.

I am not pretending the latest from Charlie and Company have pushed me into the York camp. But I actually was trying not to comment on the issue here because I like Eve, and many of Charlie’s folks. And unlike the hit piece about the alleged $5k, this didn’t strike me as unfair, or or in any way a low blow.

So what on earth do you mean by “you couldn’t be more obvious?”

And if you think my intention is to subtly undermine a Republican in favor of his Independent opponent (It isn’t. On the other thread I am overtly supporting Scott, but that was not my intention here.), then let me remind you of your approach to the Sheriff’s race. I don’t think you could be a lot more obvious on that one.

It is exceedingly obvious that you fancy yourself smarter than those on this blog….. we recognise that you can’t be “pushed: into supporting York…because you’re already on his campaign team.

…
Sure. Whatever floats your boat.

And FYI, yes, I support Scott–a decision I made only recently. The first time in my life I’ve supported a non-repubican. But I’m still confused. What have I said on this thread to support Scott?

I really don’t know why I’m being attacked.