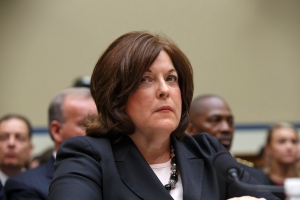 Resign (or sometimes retire) is the typical Federal employment euphemism for remove yourself with full pension and typically generous benefits to the private sector or go home. I can’t really remember the last instance of a Federal worker or manager “fired” for any transgression, even the most serious. They are just passed on into the Federal service entitlement line at taxpayers expense and everything is again well with the world. The whole Federal bureaucracy has evolved into an alternate reality compared to the situation of the typical private sector American worker and unions like the NTEU claim to not understand the resentment from the typical American worker.

Still aghast at the staggering incompetence, not of Pierson, but of the
secret service on duty at the white house allowing someone to scale the
fence, run across 200 feet of open ground, enter an unlocked front
door, and cruise around inside the WH. Pierson is herself a victim. Who
would even imagine such a thing could happen with no intervention from
on-site staff.

Yes, it is shocking. Meanwhile TSA is still dragging 90 year old ladies out of wheelchairs to pat them down.

What do y’all expect from an affirmative action led administration?

so, are you saying that anyone not white gets their gov’t leadership position only because they are not white?

Hmmm, let’s see… People votes for Obama because he’s black, Holder is anointed Attorney General because he is black. Obama selects Sotomayor for the Supreme Court because she is a Latina. I see a pattern here.

So, everyone not a white male who gets a position is because of affirmative action? What excuse do you give white guys who screw up? Do they deserve their jobs!

do you also see little green men waiting to probe you?