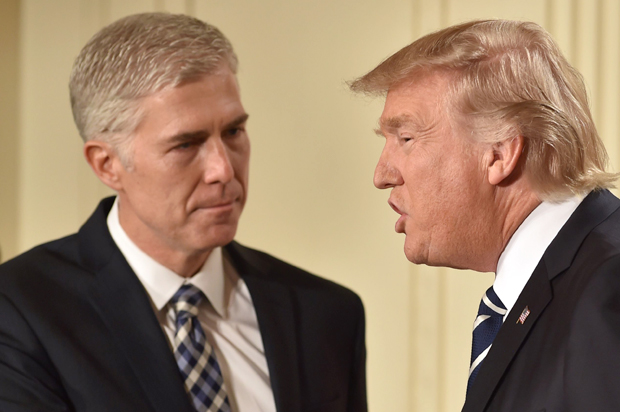 Democrats’ biggest loss in 2016 wasn’t the presidency, but the ability to put forward a Supreme Court nominee. As Republicans rejoice over the originalist judicial philosophy of President Donald Trump’s pick Neil Gorsuch, Democrats have already made it clear they will be employing every avenue to block the nomination; but they may be forgetting one important detail — Trump will likely have a second supreme court pick.

Minority Leader in the Senate Chuck Schumer (D-N.Y.) has already announced plans to filibuster the nominee, despite Gorsuch’s clear constitutional expertise and legal background. In fact, Schumer has made it clear since day one, he would oppose any conservative justice. In a speech on the Senate floor he claimed Gorsuch “will have to earn 60 votes for confirmation,” setting up a clear desire to filibuster.

However, some Democrats are now encouraging Schumer to think long term at another option, striking a deal with the Republicans.

It is becoming clear a second and possible third Supreme Court nominee could be up for nomination under the Trump presidency, making Gorsuch only one of several justices Trump could put on the bench.

If Democrats are too hard-headed on Gorsuch, they worry they could ruin the opportunity to compromise on any other justices.

Which is exactly the reason Politico writer Burgess Everett explains, “The deal Democrats would be most likely to pursue would be to allow confirmation of Gorsuch in exchange for a commitment from Republicans not to kill the filibuster for a subsequent vacancy during President Donald Trump’s term. The next high court opening could alter the balance of the court, and some Democrats privately argue that fight will be far more consequential than the current one.”

This “filibuster kill” Democrats are trying to prevent Republicans from employing is referred to as the nuclear option for the Senate, and was first employed by Democrats themselves.

In 2013 Senate Democrats led by Harry Reid removed the filibuster from lower court nominees and executive office appointments so they could advance with a simple majority rather than the 60-vote supermajority. While this may have seemed like a political ploy at the time to bring justices into lower courts that would assist in Obamacare implementation, the precedent was strong.

This stands true for every court besides the Supreme Court; if Republicans changed this to include the Supreme Court, an easy task with their simple majority, they could prevent Democrats from ever winning a Supreme Court debate in the current Senate.

However, this image of a deal has one obvious, major flaw — Republicans have absolutely no incentive to become a part of it.

Republicans can easily utilize the nuclear option and since Democrats created it, there is little room for judgment. Either way, Republicans wonn’t need to struggle to get the eight extra votes needed to beat a filibuster for Gorsuch — or any other conservative jurists in the future.

The American Bar Association unanimously awarded Judge Gorsuch its highest possible rating. He floated through this week’s confirmation hearings. Liberal and conservative colleagues alike have praised him to the stars… Not even Mr. Schumer denies Judge Gorsuch possesses a singularly gifted legal mind and is eminently qualified for the court. His objection, instead, is that the nominee is ‘conservative.’”

While Democrats weigh their options, it is clear Republicans still have the upper hand by picking the optimal Supreme Court nominee. If Schumer wants to filibuster, the Republican Senate should have no problem going nuclear to ensure that Gorsuch sits on the Supreme Court.

I am disappointed, but not surprised, to hear that Senator Kaine is joining the filibuster of Judge Gorsuch.

With the level of hostility in the congress now, I believe the filibuster is no longer a useful tool in the senate. The GOP should keep moving forward and and at the first sign of a fillibuster, go nuclear for good…to include ALL votes in the senate. Majority rule…when the American people get tired of the Republicans, they will just vote them out of the majority. But instead of calling it, “going nuclear”, I would suggest the GOP call it, “Invoking the Reid Rule”. Let Reid (and Schumer) go down as the people who destroyed the senate.

I suggest that the people who think Trump is dead read his ART of the DEAL. Unlike the fixated Left, he has multiple irons in the fire. Because of his flexibility and persistence, he has done a dozen things of great significance under the cover of healthcare repeal. His request for an investigation of the Clinton uranium fiasco is perfect politics. You want an investigation of Russia meddling in USA politics – how about uranium one?

I’m going to try to think this through out loud here to get this Democratic strategy approach straight in my mind. So the Democrats propose giving Republican nominee Gorsuch a pass on the 60 vote Senate super majority confirmation vote under the current rules requirement that has ALREADY been broached and replaced by a simple majority vote for all other executive appointments and non Supreme Court national judicial appointments by the Democrat’s themselves, thereby, allowing the Obama Administration to thoroughly pack the federal judicial system and it’s appeal courts with left wing and progressive activist judges for at least the next generation.

The only Democratic leverage to accomplishment this proposal is the veiled prospect of filibuster (an increasingly weak reed to hang your attempts to block a nominee on in the first place for either party), a threatening stick of the wet noodle variety rather then a club, in exchange for which the Republicans will give away their Senate majority position (52 of 100 Senate seats) provided by this nation’s voters and reject any use of it for the very SAME simple majority vote process to change the Senate rules regarding Supreme Court nominations on any future proposed Republican Supreme Court nominees that they have actually already employed effectively in the past to park the lower courts themselves. Do I have this more or less correct and if so read it back to yourself a couple times and let this deal (?) sink in completely.

Who in their right mind would fold a totally obvious winning upper hand as the Republicans now hold in the Senate on a Democratic bluff as weak and toothless as this proposal? I realize we didn’t send any Erik Seidel’s to the Senate (the USA’s top professional poker earner at $30M plus) but even entertaining this Democratic proposal for a second from the Republican side is completely craven, hopelessly pitiful and a collective insult to every voter that elected these individuals into their majority position.

It’s what they do.

The Turtle will hide in his shell as usual and give the Dems a win by default. Besides, this gorsuch guy has all the signs of being another closet liberal like Roberts.

Gorsuch appears to be pretty solid to me.

What am I missing?

Roberts looked pretty solid too, right up to the point he started ruling mandates a tax. When Rino’s praise a judge as being conservative, alarm bells should be going off.

They got to him, probably something to do with his kids.

Righto! That’s the ticket! “They got to him, probably something to do with his kids.” Now that there is the sort of commentary you simply do not find elsewhere. Brings out the best in people!

So he sold out Our Kids instead.

Yep, only scenario I can envision.

But wouldn’t we all do the same?

I don’t know of many parents that wouldn’t try to move Heaven and Earth for our kids, always thought we were wired that way.

Why would you sacrifice your children for a forced ultimatum? Better to go down fighting as a family than to exist in eventual slavery. If today you will compromise your beliefs, tomorrow you may be forced to sacrifice your wife or child.

Seriously you got kids?

I have several along with their spouses, and none of them would trade the family for threats.

Unfortunately, I am more cynical and jaded than you. I envision untoward pressure and motivation towards folks in lofty positions and fully expect them to cave at their greatest point of leverage.

Or I could be wrong and Judge Roberts was just meting out good conservative law like he’d been doing most of his career.

In that case I’ll just move quietly along, nothing to see here.

No, Democrats are going to filibuster. It’s a done deal. Absolutely no tactical reasons for them not to. The Republicans will lose the Senate ASAP, because of Trumps BS healthcare plans, tax increases, and war against populism. So, do not count on 2 picks for Trump.

I ain’t even a Democrat, and know this.