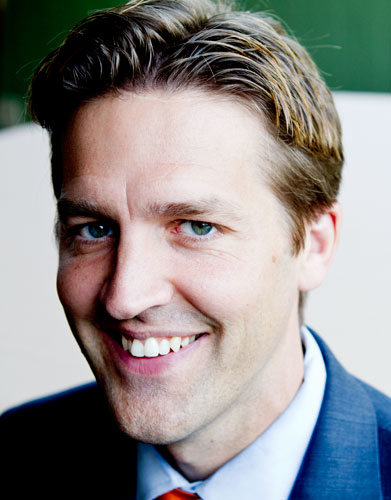 Senator Ben Sasse Will Not Support Trump as our Nominee was last modified: February 29th, 2016 by Jeanine Martin

I understand exactly how Senator Sasse feels. And so do many of my conservative and thoughtful friends. Sure we want a wall, and an end to illegal immigration. And yes, we relish the idea of someone who will take the fight to ISIS.

Here’s the problem. We have never seen a presidential candidate like Trump, who is profane, infantile, and self-absorbed to a degree that is frightening. He appears to be incapable of thoughtful reflection. His policies are so shallow and contradictory that someone like Stephen Colbert can air a segment of “Trump vs. Trump” where the boastful, very rich guy, can be seen debating with himself, to much hilarity. Imagine the general election with a collection of outrageous Trump clips … Hillary’s staff is gleefully compiling them now. A candidate cannot act the fool, and call everyone names, and still expect widespread respect. Trump could have waltzed to the nomination with widespread support if he would have acted like a reasonable human being. As it is, the general election will require Trump to re-engage a goodly number of Republicans, who he has alienated.

Just had a phone call from a woman from the Trump campaign with a very heavy foreign accent, urging me to support D. Trump. I assured her I was going to vote for Trump. She was calling from N. Va.

I’ve never heard of Ben Sasse before he came out in the media yesterday, or today, with this no-endorsement declaration, to make a name for himself. I’ve never been to his state, which I had to scroll up to check the article on to see which one of those non-descript states out there it was. I do not give a rat’s … who the freak Ben Sasse wants me to vote for tomorrow, I am going to vote for The Donald. Just sending a message to the Party which has ignored us for years.

I have, so have lots of people given his stature in the Conservative movement. He doesn’t need to make a name for himself, he made it before this.

He never tried to tell you who to vote for, he said that explicitly in his letter, which was very respectful. Did you read what he said? Or did you judge him based on this article?

Your unnecessarily derisive comments about one of our outstanding young conservative senators reflect poorly on you. Bet your “outspoken” candidate would be proud of your disrespectful tone. Guess you are just telling it like it is, huh.

Huh. Robert Kagan (sp.?) said in yesterday’s WaPo that he’d vote for Hillary over Trump. Wonder how many will follow his lead.

He’s heard it, he doesn’t like the way it is headed due to the conduct of the man leading it. Namely that Trump doesn’t seem to know, or care, what the Constitutional limits of the President’s power are.

This character is a damn fool.

Big deal, some wienie senator joins McConnell in being a spoil-sport. Never heard of him before this. Guess Sassie just wants the publicity. Trump sure doesn’t need HIM.

However Trump IS getting some big-hitters, and well-respected patriots support. Senate Conservative giant, Jeff Sessions HAS strongly endorsed Trump though. And Benghazi Heroes Mark Geist and John Tiegan (of ’13 Hours’) have also!

Ben Sasse is making waves, practically with his “What is a Conservative” answer. He’s considered a rising star. For his age he’s got a very impressive list of accomplishments, from a President of University to a Senator to a host of Christian causes he’s supported and advised.

Sessions is on his way out. Due to age this is probably his last term in office.

Jeff Sessions is a Senator I have long supported. If he retires, someone else who carry the mantle.

Absolutely. He’ll be replaced in his Senate seat when he retires.

Will the next guy be a Trump man? Nope.

I thought that Shaun Kenney had already said that he wouldn’t support Mr. Trump.

Don’t know what to tell you other than Ben Sasse announced it yesterday on his Twitter page. Check his Facebook page, the letter to Trump supporters went up late last night. Perhaps Shaun could see into the future? Other than that, I can’t explain it.

I’m wondering if Sen. Sasse has actually ever met Donald Trump or even personally spoken with him. I’m guessing he hasn’t. Pity

Don’t know. I do know that Ben tried to ask Trump a couple of questions on Twitter and Trump spent part of the day blasting him for it.

I guess the real question is: why would Sasse want to meet Trump after Trump called him a “gym rat” for asking him about his viewpoints?

Did you ever read that Kenney schmuck’s opus, “Drive the Nativists Out of My Party?” Looks like the guy got what he wanted… Now his party will be him and Brian Schmuckman and Junior Hoefty Boy… Everyone else left them.

If a third party forms, there will be nothing left for Trump’s team to lord over.

A third party? There aren’t enough Country Club Republicans to form a bridge club. That third party isn’t going to form around the likes of Jeb Bush or Marco Rubio… The GOPe is dead.

There are more than enough Tea Partiers, Social Conservatives, Conservatives, and Republicans to form a new party. And they will if Trump is the nominee.

The people who find Trump morally and politically unacceptable come from all the wings of the Republican party, Republican, moderate, Conservative, small l Libertarian, Evangelical, Social Conservative, and neoconservative.