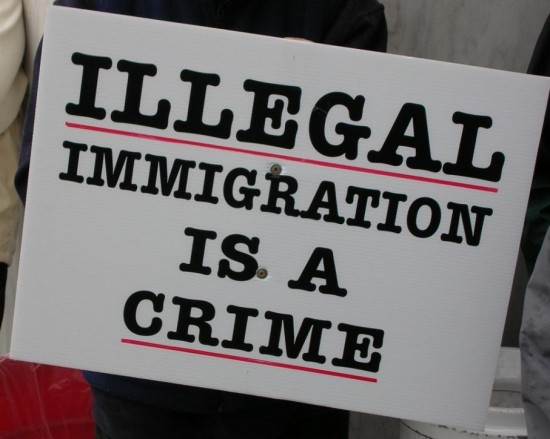 Senator Dick Black’s bill to prevent children of illegal immigrants from receiving in-state tuition at Virginia’s universities has made it out of committee and will receive consideration by the full Senate. Senate bill 722 was passed on a strictly party line vote of 8-7. [read_more]

If illegal immigrants get tuition breaks at our universities, why shouldn’t tax paying citizens in Maryland, North Carolina and every other state get the same breaks?

Governor McAuliffe has vowed to veto the bill,

“Governor McAuliffe views this bill as counterproductive and mean-spirited,” said Brian Coy, a spokesman for the governor.

“He is focused on expanding economic opportunity to Virginians from all walks of life, not targeting some for discrimination. He would veto this bill.”

Senator Black thinks it’s not fair to Virginia parents who have paid Virginia taxes for a lifetime to have their child’s place at a Virginia university taken by an illegal immigrant.

I have said it before, and I will say it again. The Republican’s are doing SB 722 just to satisfy their low info base. Why did they not pass these type bills when they had the House, Senate, and Mansion?

The Republican money donors rely on illegal’s for their cheap labor. Ain’t no way they will ever give that cheap labor up. And the Democrats get their votes.

This bill is just for show. The taxpayer would have been better off if the General Assembly did not even have a session in non-budget years.

Reinhardt – when it comes to a low information voting base, the Democrats take the cake. Just look at the Democrat’s most faithful constituency – its urban welfare base. Now, that group makes the GOP voter base look like Thomas Jefferson and Ben Franklin.

Mark, let me ask you this. Which party is smart enough to refuse to be divided, and remains united with common goals? Is it the Republican’s or the Democrat’s who are divided?

Reinhardt – you took a swipe at the GOP “low-info” base, not the GOP’s unity. The fact that the GOP is divided has nothing to do with the ability of its core voters to grasp and understand the issues. In fact, it could be quite the opposite. I am smart and well informed enough to know when my party leaders are exploiting me, and thus I speak out. You probably could NOT say the same thing among the young and urban voters who comprise the Democrats’ most loyal voting blocs, and who are motivated to vote by “the war on women” or “Republicans are racist.” That is where your low-info voters are.

The Illegal Immigration Reform and Immigrant Responsibility Act of 1996 prohibits access to in-state tuition benefits by undocumented students (section 8 USC 1623) It reads “…an alien who is not lawfully present in the United States shall not be eligible on the basis of residence within a State for any postsecondary education benefit unless a citizen or national of the United States is eligible for such a benefit…” But I thought Obama’s DACA (Deferred Adjudication for Childhood Arrivals) executive action included language in effect setting this aside so unless Congress defunds Obama’s program ( a tooth fairy premise) I’m not sure this is actually in effect. I may be wrong does anyone understand the current status of this 1996 Act in regard to Obama’s executive action? Regardless, if it manages to pass, McAuliffe will veto, if his veto is somehow overruled then Holder will surely step in with legal action that will end up in the lap of the State’s AG. I believe we can fairly predict what will happen there. I just don’t see the gain for pain in this effort.

If we follow your logic, why should any Republican submit a bill for the next couple of years? After all, Obama will be President until 2017 and McAulliffe will be Governor until 2018, so they can veto or override ANY bill we pass, right? I guess we Republicans should just twiddle our thumbs and wait until they’re gone before we try to get anything done, huh?

Somtimes you need to act because it is the right thing to do. Giving in-state tuition to illegals is wrong, and it hurts legal US Citizens and Virginia residents. By putting this bill in, and forcing a debate (and votes) on it, we get the chance to try and enact positive legislation for Virginia, and it forces Delegates and Senators to take a public stand on the issue, which voters can then consider when election day comes around.

Besides, you never know what McAuliffe will do. Who would have thought a Democrat Governor would sign a bill requiring parental consent before a minor gets an abortion, but that is just what Mark Warner did in 2003.

Didn’t say or imply any such thing so no straw men please. The fact is in any given GA session these is only a limited amount of time, effort and political capital available to expend on legislation. Is this a strategic issue for this session given the many pressing problems on the table – in my opinion no, in yours apparently yes, but no one is recommending twiddling thumbs. I will leave relying on the vicissitudes of depending on McAuliffe to your crystal ball.

This proposed legislation is like throwing a punch after the bell has rung ending the fight. Our punches should have been hurled – and must continue to be hurled – against the employers who ILLEGALLY hiring illegal immigrants.