You have GOT to read this ridiculous email message from Senator Wagner yesterday: “I don’t want no veterans, no minorities, and no grassroots activists at the 2nd District GOP convention Saturday! There is ‘small band’ (of actually HUNDREDS) of Republicans who have the audacity to fight back and appeal our effort to slate them and disenfranchise their vote. Can you believe that? How dare they! Come Saturday and help me keep all the veterans and blacks and grassroots activists Â from voting at the Second District Republican Convention!”

Ok, I confess, that is my interpretation to his email, but you really need to read between the lines when Â you read thisÂ latest twaddle (nonsense for the ill-informed) from Senator Wagner! Wagner is now whining and complaining that Republicans refuse to be bullied. He is incensed that they have dared to file an appeal to his slating fiasco that disenfranchised hundreds of voters – including ALL blacks and veterans.

Now he wants all the people that he bullied to come defend what he did to them…uh yeah, whatever! 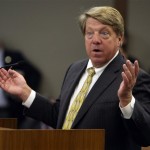 I want to make you aware of an appalling stunt that Gary Byler is trying to pull on the Virginia Beach Republican Mass Meeting voters who elected our 32 Delegates to the convention by a vote of 643 â€“ 305.

Despite the clear, unambiguous words found in the Republican Party of Virginia Plan and in the official Opinions of the Partyâ€™s General Counsels going back more than 30 years, Gary Byler is desperately attempting to overturn what we voted for at the Mass Meeting.

His plan is totally illegitimate and prohibited, but evidently Gary doesnâ€™t care.

Folks, we canâ€™t change our Party and get it headed in the right direction unless we get rid of dishonest Party management.

Even the Partyâ€™s own lawyers say that Gary canâ€™t seat people as delegates who were never elected to become a delegate at a mass meeting.

They donâ€™t have the votes to win at the convention so now they are attempting to cheat.

I need you to help me stop him and his small band of followers.

I need you to come over to the Second District Convention in Hampton (address and directions below) on Saturday to defend what we did at the Virginia Beach Mass Meeting and make sure that our properly elected Delegates are able to vote on the question of who will be our next District Chairman.

Cantor Consultant Threatens to Break Republican Party of Virginia? - The Bull Elephant May 15, 2014 at 2:10 pm

[…] tactics that have been employed by Ray Allen and his allies over the past months. Check here and here for recent articles exposing the parliamentary maneuver called “slating,” […]

Wish VFRW would stop this outdated practice as well. Having a board of 11 decide who is best suited to serve the 25k members is old school. They need to change the way they do business to be more open to all types of republican women or do they just want to continue to live in the past.

So, are they going to bus the retirement home residents and Democrats to Hampton to defend Wagner’s shenanigans? What about Mayor Will Sessoms who endorsed Terry McAuliffe, Mark Warner, and Jody Wagner? Will he show up again?

One other thought, well, two. His “unless we get rid of dishonest Party management.” It’s shocking he would use such words as his own behavior at the Mass Meeting, in collusion with Del Scott Taylor, et al, that certainly gave the appearance of dishonest Party management. And it was THEIR shenanigans that night which left people feeling “cheated.”

Speaking of shenanigans, Eric Cantors Young Guns Virginia boys are still in the game defending slating.. lucky for Frank Wagner.. ERIC CANTOR, get out of my district!

It’s unfortunate that the public may believe his lies about the supposed Mass Meeting “vote” (643-305) which he used to disenfranchise the 1,000 names put up for a vote to confirm them as delegates – by which he and his henchman, Del Scott Taylor, suppressed confirmation with their motion of the 32 delegate slate. They did it by blindsiding and taking over the Mass Meeting – as there was no official notice to party members about this being on the agenda, Taylor, Wagner and Bruce Meyer planned beforehand to pack the house using their political machinery.

Having been there that night, there was nothing circumspect or “right” about what went on. And I hope and pray that we’re able to get unprincipled Republicans out of office just as much as we want the Democrats out.

The Old White southern democrat style ALL WHITE and powerful elite ‘faction’ put leaflets on every seat instructing the democrats and sheriffs that former Senator and now VB sheriff KenStolle and mass mtg chairman Stolle leveraged to turn the meeting into their meeting. Pure lily White old fart style voter abuse stereotype applies here. This kind of voter abuse is a truly despicable example of a dishonest interpretation of running a fair and transparent meeting for the benefit of the all old white elite entitled clan of old school VB politicians. Now that the veil has lifted, the remaining people engaged in this process are wanting more information and the more spin they hear the more they distrust their elected (1%er) wealthy old white male representatives.

Keep it all old white male wealthy and small.. And keep it all. That is the trick Wagner wants to turn so he can corner the RPVB for his delusional run for governor in 2017.

Plenty of old white males of no small means who are on our side. I’d wager even in that small demographic we still outnumber the establishment badly. Their only prayer to keep control is that we don’t show up.

Kenny Longo, the VB chair is supposed to represent all the GOP members of VB, at least that’s what many of us thought. Obviously, we were wrong.

He is inextricably tied to Frank Wagner, in the tank shall we say..

Longo is in it for Longo.