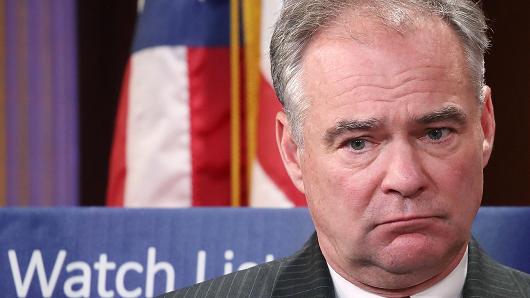 The Senate voted today to override an Obama veto on a Terrorism bill that would allow families of those killed in the Sept. 11, 2001 terrorist attacks to sue Saudi Arabia for any role in the plot.

And guess what? Our Senator Tim Kaine was not there to vote. I read the New York Times report and it had no mention of how Kaine voted. I guess they did not want to embarrass him. After all he is a Democrat, and hence their candidate for Vice President.

According to the Washington Examiner he was 20 minutes away, but was still “unable” to make the vote.

Virginia was hit on 9/11. Wouldn’t Kaine, representing Virginia in the U.S. Senate, have an interest in this bill? I think it is clear that Kaine was playing politics. He and Hillary don’t want to upset Obama’s supporters. They are in a tight race; they need every Obama voter they can get. So the political choice was to just miss the vote.

Now the reason I have nicknamed him shifty Tim is that he shifts positions to conform to the needs and views of Hillary Clinton. On TPP, right to work, the Hyde amendment, Kaine will conform to what Hillary wants.

In this case it came down to a Bill that could affect Virginia victims of 9/11 and go against the wishes of a Democrat President. What did the Virginia Senator do? You guessed it he got out of town.

Years ago John F. Kennedy wrote, or at least took credit for, a book called Profiles in Courage, which profiled members of Congress that took tough and in many cases career ending votes. Safe to say if that book is ever updated Tim Kaine will not be included in the index.

I’m betting your nickname of “shifty Tim” is going to catch on real quick. Or not.

Yup, that 97 to 1 vote surely required his presence.

In other, more important, news today about Tim Kaine you might want to check this:

You’re still trying to make that into an issue that the other 49 states would care about?

They cared if they were traveling in Virginia!