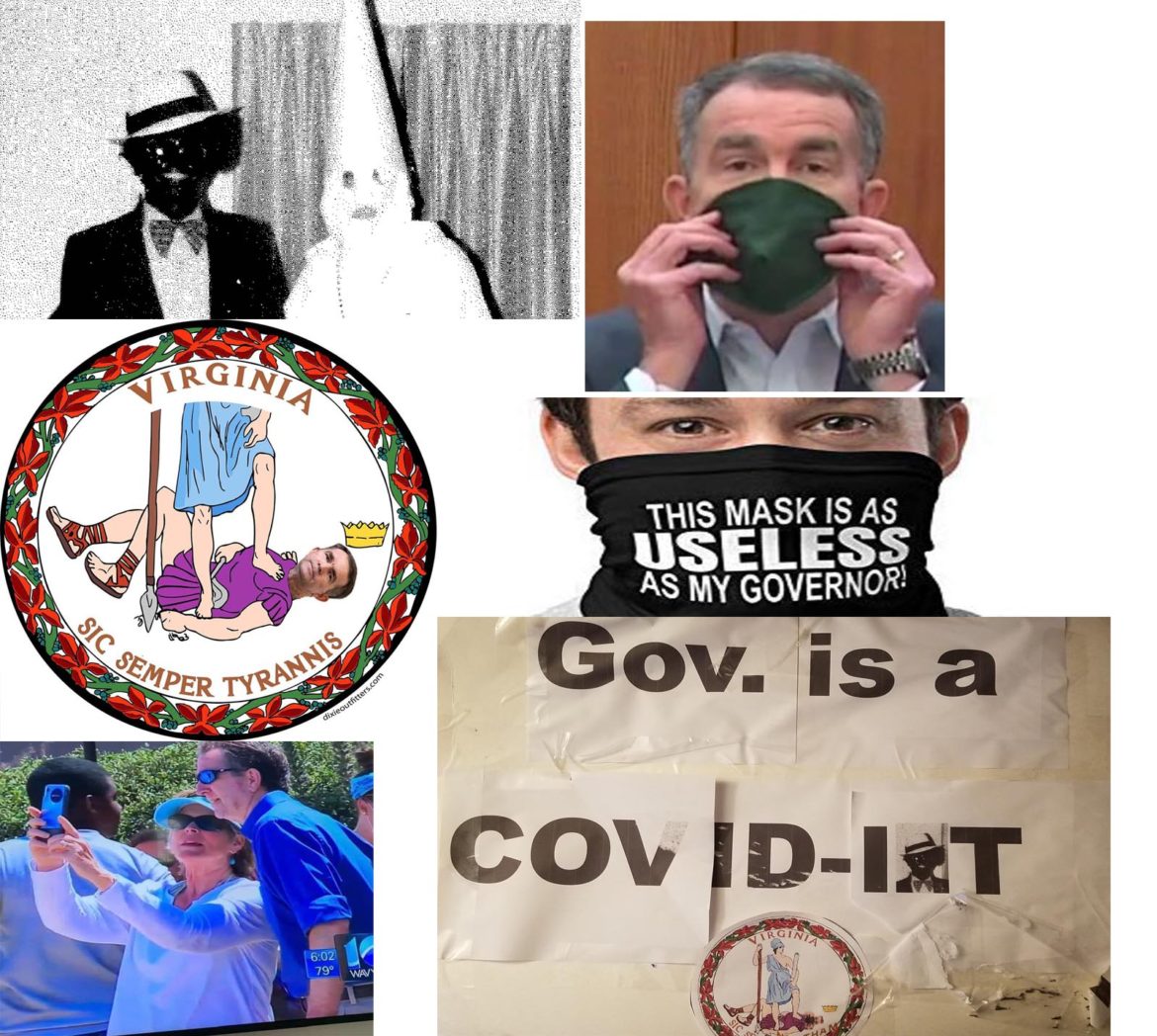 So long, Gov. Blackface, you won’t be missed

Arrogant and shameless, Northam was worst Virginia Governor since the segregationist resisters in the 1950s

Ralph Northam, M.D., leaves the Governor’s mansion at noon Jan. 15, and  eight years in Richmond, including four as lt. governor, plus six years as a state Senator, and considered then a “blue dog Dem.”   I believe he will go down in history as one of the worst governors Virginia has had since the segregationist “resisters” of the 1950s.

But Northam was probably a segregationist, at least a closet racist, or else he would not have taken the nickname “Coonman” in his youth nor appeared in the 1984 Eastern Virginia Medical School yearbook in blackface — Or, was he the guy in the KKK outfit  ?

But Northam, showing no shame, bucked calls from top Democrats and Republicans to resign.  To this day, he has not acknowledged if he’s the guy in blackface or the Klan robes

Then, Attorney General Mark Herring disclosed voluntarily he also put on blackface in college – and Lt. Governor Justin Fairfax got embroiled in a sexual harassment scandal.

However, Democrats do what they always do — show righteous indignation, call for resignations, and then when the media frenzy dies out, turn their blame-game on to Republicans, like Donald Trump, and rally around their fellow Dems (including Northam).

And, it worked.  Republicans lost three Virginia congressional seats in 2018 and Democrats took over the General Assembly and many county supervisor boards in 2019.

But because he was in a bind with black legislators and activists, Blackface had to show anti-racist redemption.  So, he essentially bent over backwards to the radical Black Lives Matter/New Virginia Majority agenda, to erase anything from  state law they deemed to be Jim Crow.

Almost every law Democrats proposed or got passed in Richmond was in the name of correcting Virginia’s Confederate past – notably, allowing Civil War monuments to be removed, ending the death penalty and criminal justice “reform” like lenient parole, banning facial recognition software (under the guise it discriminates against blacks), and raising to $900 how much someone can steal before being charged with a felony. And gun rights were curtailed.

Even Virginia’s successful program to abate property taxes on open space and farmland  was deemed racist, as was the Progressive-era reform to allow town and city elections in May (false on all counts)

And then, George Floyd was killed by Minneapolis police.  Riots ensued nationwide, notably in Richmond, where police were told to stand down and Blackface, despite his COVID restrictions on large gatherings, allowed protesters to flock the Capitol grounds.  Monuments were defaced or destroyed, including Christopher Columbus; police cars and buses burned and stores looted.  Monuments removal legislation created the angst and conflict I had predicted.

Continuing his redemption efforts, Northam axed the head of VMI over charges of racism   without a proper investigation, merely because black activists and legislators wanted it.  School districts were mandated to adopt LGBTQ naming conventions  and  “equity” courses, a la critical race theory, stoked controversy from Virginia Beach to Loudoun.

So, eager was Blackface to appease African American leaders that he endorsed black Del. Jay Jones for A.G. in the 2021 Democratic Primary over Herring.

Northam’s COVID restrictions mirrored that of Andrew Cuomo in New York and Gavin Newsome in California.   Except when get to the disease by not social distancing, like taking selfies at Virginia Beach.

The national media focused on Cuomo’s “nursing home scandal,” but ¼ of Virginia’s nursing home population died of COVID and 9,500 employees quit fearing COVID transmission   Virginia is No. 2 in nursing home deaths among states and Dr. Blackface did little to help at-risk elderly.

But his lockdown edicts hurt school kids, barred family gatherings at beaches, closed houses of worship, beaches and parks for a while, but in the quest to save on scarce hospital protective gear, allowed abortions to continue, deferred surgery and dental care for millions and left state liquor stores and lottery offices open.  Virginia’s ranking on job growth dropped

Northam flubbed it on transportation, too.   I cannot identify any major transportation facility his administration championed or initiated, except a wasteful project to upgrade passenger rail service between DC and Richmond vs. adding lanes on I-95.  Plus, despite protests from his own fellow Democrats, he allowed confiscatory tolls to remain on I-66 inside the Beltway (started by Terry McAuliffe), which is nothing more than a slush fund for bike trail and transit projects for Northern Virginia Democrat politicians.

Now, his failed administration ends with the worst traffic jam on I-95 in history, where motorists (including fellow Democrat Sen. Tim Kaine) were stranded for 24 hours in their cars on a cold winter night without any assistance from the state.

But using the shameless deflect-and-blame strategy, Blackface took no responsibility and said motorists and truckers should not have ignored VDOT storm warnings.

In the end, his efforts to be “woke” did not help maintain Democrat control in Richmond.  Rather, black voters did not return the “favor” and stayed home, and a goodly number backed Glenn Youngkin and other GOP candidates.  The lenient parole board he championed in the name of “racial equity” became a lightning rod for conservative voters to show up in droves to vote Democrats out.

In a glowing tribute, the Washington Post called Northam  ‘A wounded healer’ [with an] extraordinary term in office, forged by scandal; a governor of lasting consequence

I don’t understand what that means but do know that unless Glenn Youngkin and GOP governance in Richmond can dig us out from bad social justice policies, Virginia citizens will be living with the consequences of Blackface’s redemption for a long time.

so? all nirtham had to do was confess apologiE and move on. instead, this s revelation led norrhsm to his redemption efforts by backing race based policies like the destructive criminal justice reforms. northam went from being a moderate Democrat to a member of the squad. sorry John but Virginia should not become new jersey

Great – but George Floyd was not “shot dead.”

Thank you. It’s been corrected!

Pleased Virginia is changing course, with a new administration and majority in the HoD.

“blackface”……….good God……stop being so juvenile. No proof that he is in that photo.

Northam was a great governor. I would love to see him run again in 4 years.

Youngkin is a trumper parrot

Other than Northam admitting he was in blackface and then retracting it. But, nah, there is no proof other than the words that came out of his mouth. Of course he is a Democrat so, if his mouth is moving, you know he is lying.

Well the Washington Post was right when they called him a Governor of lasting consequence – he was so bad that Blue Virginia went Red in 2021. Northam was a disgrace of epic and biblical proportions. Maybe most of all, Northam showed just how hypocritical the Democrats are when it comes to race.

Chaos theory likes to say, “a butterfly flaps its wings and a hurricane is born.” That was Northam’s infanticide comment, which angered a former classmate to post Northam’s picture and, through the sequence of events listed above, eventually brought down the entire Democrat Party in Virginia and across the country. As we head to the mid-terms, the hurricane is still blowing. Ralph Northam started the Red Wave. Thanks, Ralphie.

infanticide? Do you know how many third trimester abortions have taken place in Virginia since 2000? I bet you have no idea.

Click the link to the WTOP interviw in my article. Northam was trying to defend Kathy Tran’s late term abortion bill, where she said in testimony before a House Committee that the bill would allow a post-partum abortion. It was this interview that incensed a med school colleague who leaked the yearbook photo