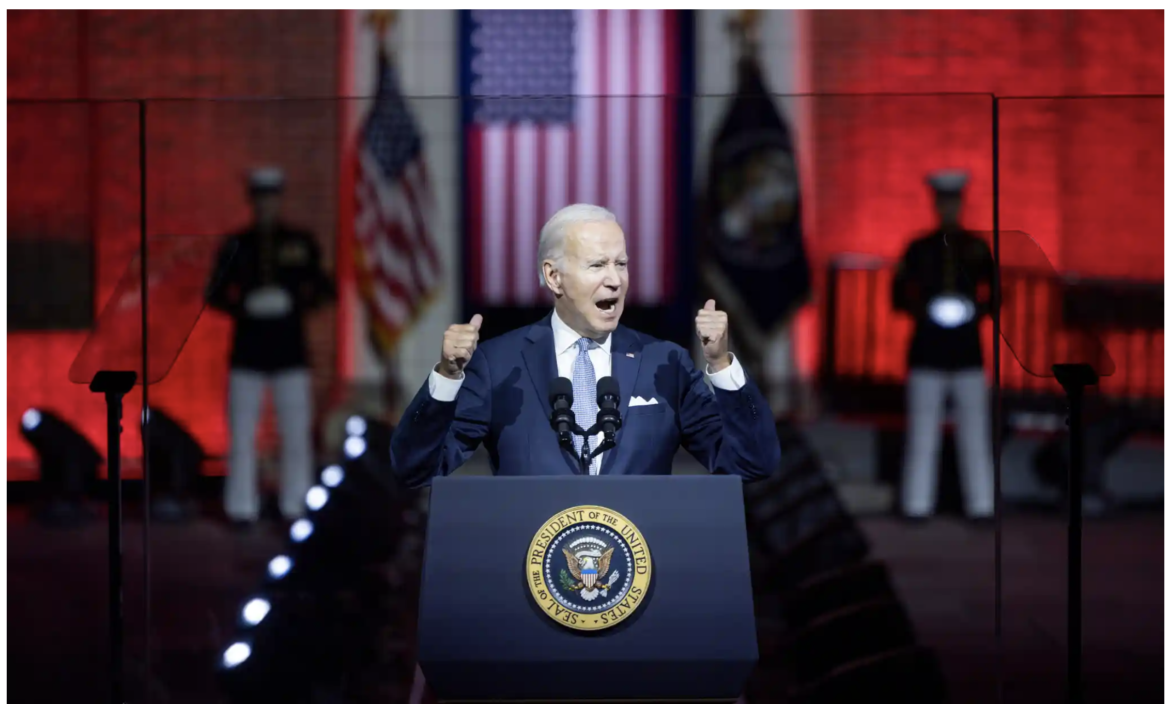 The recent Biden speech at Independence Hall in Philadelphia not only featured attacks on anyone who opposed his agenda but embraced elements of the socialist and communist ideology.

Marines standing guard during Biden’s political speech imply a threat.  Would he use the American military against his opposition?  He may not have to if his 87,000 manned and armed IRS army is fully ready to fight and kill.  And let’s not forget his well-armed and already weaponized FBI.

The speech was given at the start of the Labor Day weekend.  (In 1889, May 1 was designated May Day, a day in support of workers, by an international federation of socialist groups and trade unions in commemoration of the Haymarket Affair, a violent confrontation that took place on May 4, 1886, in Chicago, Illinois.  In the United States and Canada, May Day is celebrated on 1 September).

There is, of course, symbolism embedded in Biden’s speech.  Loud and angry sentences were delivered in a way that would make any living WW2 veteran cringe.  Words and phrases that made political opposition figures into potential enemy combatants.  (The speech was reminiscent of Hitler’s Reichstag speech in 1939 which served as a public declaration of war against Poland.)

The overall language and demeanor of Biden’s speech were that of a dictator, not an American president.

The secret societies motto is “In chaos there is order”. This administration is living proof of that. It’s going to get worse before it gets better. Only when He comes will it get better. Keep your eyes and hears open but more importantly, keep them on Him.

Who is old enough to remember when BLUE was the color associated with Republicans? Whose dumb idea was it to allow democrats in media to change our color association?

The Biden administration and their useful idiots are doubling down on the meaning of the red sermon.

There are many moving parts to what is happening. Puppet Biden’s role (he certainly didn’t write his speech) may be to continue to cause Americans to fear MAGA Republicans and create discord between Rhinos and Trump supporters. Rhinos may now include democrats who can’t stomach Biden’s anti-American program. It is quite possible Biden is aiding and abetting the World Economic Forum to achieve its goal of world government, a.k.a. The Great Reset or the United Nations Agenda 2030, which is in full cry. Trudeau is one such authoritarian leader. Our middle class is targeted for extinction so that the Great Reset goals can be achieved. A false flag operation may precipitate the conflict. At the ready are the ubiquitous standing “armies” buried in our federal agencies, like the IRS, HHS, VA, SSA, EPA, Smithsonian, U.S. Mint, FDA, etc., to quell any civil conflict and usher in tyrannical martial law that I fear the most.
Mr. Trump and his supporters stand in Biden’s et al.’s way.

I am saddened that you don’t think.

hey, john wayne, you talking to me?

Maybe yes and maybe no.

I am grateful that I don’t think like you

He’s an optometrist, not a real doctor.

An optometrist can’t make you see reality. You have to do that for yourself.

Well he isn’t claiming to be Sgt Rock, hero of Duck Ten Pin like you old Redneck… Stolen Valor… Hey when is the next post by Armed Liberal? By the way did Bearing Grift kick you out of there? I wonder why… they agree with you…