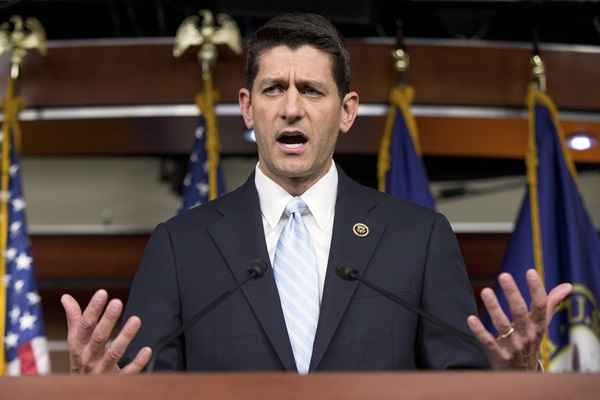 Speaker Paul Ryan Will No Longer Campaign for Trump

In a conference call to his fellow members of the House of Representatives, Speaker of the House Paul Ryan said he will no longer campaign for Trump. He is

“only campaigning for House seats and promoting our agenda,”

(Can anyone tell us what Ryan’s agenda might be?)

Rep. Greg Walden (R-Ore.), chairman of the National Republican Congressional Committee, is instructing members of the House to continue polling, because the end of a campaign is like landing an airplane “you have to trust the instruments”.

While Paul Ryan’s office was quick to say he’s not giving up on winning the Presidency that was the impression left with those on his conference call. One House member on the call reported Ryan saying he will,

“spend his entire energy making sure that Hillary Clinton does not get a blank check with a Democrat-controlled Congress.”

That sure sounds like he thinks Hillary is going to win. Ryan also told House members,

“You all need to do what’s best for you in your district.”

Ryan said he is “willing to endure political pressure to help protect our majority”.

How will keeping Republicans in power help our country?  They don’t do anything other than support whatever Obama wants.  They promised to restore ‘regular order’ which would allow the House and the Senate to debate the appropriations bills and allow them to add amendments and to remove funding from parts of the bill.  Instead Republicans control both the House and the Senate and they simply rubber stamp whatever budget Obama wants including full funding for Planned Parenthood and EPA. How do we benefit from keeping Paul Ryan as Speaker?  How is it any different than having Nancy Pelosi as Speaker?

Reaction from Trump and others here.

In any future nomination contest for President.

Good start, do similar for locals and then start a list for those that support the above.

Any of these fundraising for any of your locals? Track and list.

Any of your party officers so inclined? Track and list.

Any Republicans not supporting the nominee may profit from their example.

When has Ryan ever campaigned for Trump? And no, it doesn’t matter, it seems the whole sex tape gig was done by Ryan and crew, Ryan just put the last nail in his own coffin. They really don’t get the fury of Americans.

Trump will get more votes without Liar Ryan’s faux support.

Comstock dumped Trump. Are you still voting for her?

Yes she did. Look at Saturday’s paper. She called from him to step down.

First of all, she could #NEVER say anything not in support of the nominee.

Second of all, everyone knows how vigorously she is working in front of and behind the scenes to get Trump elected!

Like Abbott and Costello, Martin and Lewis, Trump and Comstock. They are campaigning so closely together a lot of folks think Comstock is the vice-President!

She has her surrogates and staff pushing for Trump almost more than they do for Barbara!

She knows how coattails work out for the down ticket and she wants that MAGA mojo!!!

That’s good news as Republican In Name Only Paul Ryan is as worthless as whale manure for the real Republicans and is an Obama yes man.

Paul Ryan is only one of many who are so embarrassed by Trump’s candidacy that they do not want any association. We have many strong conservative Republicans out here who are unwilling to help with campaigning since they do not want to be associated with an obnoxious, ill-mannered blowhard. I think we all know by now that Trump is into self-aggrandizing rallies, but has been unwilling to put in the time to understand policy issues. Decent people are running away from Trump for a reason.

Keep running. Hillary is waiting to embrace every deplorable and irredeemable.

Only the racist, misogynist xenophobes are deplorable.

Will let you know if I come across one.

No. American populists are deplorable and irredeemable. Hillary is a global socialist and divide, conquer and rule the serfs is her objective. After nearly 8 years of Obama, you cannot be this ignorant. His pitting groups against groups is straight out of the Alinsky playbook to tear down a society.

We will be standing on the docks waving a fond farewell.

Exactly. Ryan was persona non grata with me until recently. This, showing that he has a sense of personal decency, is making him go up in my estimation.

So who’s going to be the new speaker?

If the GOP keeps going down the tubes, a Democrat will the the next Speaker.

I guess Ryan did not withdraw his endorsement, only will no longer campaign for him.

Meanwhile, the dam is about to break.

Civil rights lawyer Gloria Allred said this week that women have
begun contacting her with allegations that they were sexually harassed
or abused by Republican presidential nominee Donald Trump.

After news broke over the weekend that Trump had bragged on a leaked video about groping women, Allred confirmed to Gothamist on Monday that she had been “contacted by women who allege inappropriate contact by Mr. Trump.”

“If there is an unwanted or unconsented-to touching of a person’s
intimate parts such as the genital areas or a woman’s breasts, that
could constitute a sexual assault or a sexual battery,” Allred said. “I
am disgusted by what Donald Trump said and admitted that he had done on
that video. An apology is not enough.”

In a statement
released last week, Allred revealed that Trump had once told her that
she “would be very very impressed” with the size of his penis.

It was not immediately clear if Allred was organizing legal action against Trump on behalf of the women who have contacted her.

And just think — if Trump’s ego had not gotten the best of him, he could still have his stupid Apprentice show and his name would have meant something . . . now . . .

Old story, no one will care.

Jeannine, there are many stories. And much evidence that Trump lacks substance. For many, critical mass was reached last week.

You would have found any excuse to abandon the GOP nominee because he is anti-establishment.

And sexaully assaulting women and being a racist isn’t evil, right?

When did he sexually assault women and become a racist?

He bragged that he kissed and grabbed women without their consent. That’s sexual assault. The Birther movement was racist? Saying an American judge with parents who immigrated from Mexico can’t be fair to him because of his heritage isn’t racist?

Bill Clinton raped women. Hillary started the birther movement. The judge is a La Raza official and is on its board. All of this is easily googled.

What else you got?

Do you get paid per post or is it flat rate for the blog?

Crude is not evil. Someday you may understand the blackness of evil. Today is not the day.

For many #nevers that weren’t with him anyway.

-anyone gullible enough to be swayed by that smoking gun is out of their political league.

Sure, the core group won’t care, but they aren’t nearly enough to win. Trump could rape their wives and they wouldn’t care.

So let me know when he is shooting and raping on 5th Avenue.

What’s your motivation for sharing these truths? Which organization are you grastroturffing for?

Maybe this news is only just now reaching Lovettsville: Most American women have had enough and they are ready to rumble.

Speaker Ryan’s withdrawal of support will only endear Trump supporters to Trump even more.
Trump truly is the biggest outsider to every get on the presidential ballot. We collectively have one shot to take down the establishment and Trump is it (like it or not).

You can’t take down anything with an inarticulate megalomaniac candidate who doesn’t show any interest in crafting policy, or doing his homework. Top it off with a dollop of misogyny, and you have the perfect recipe for disaster.

Nope. He was NEVER one of us. The D’s and R’s are all mixed up.He and his wife are Globalists. They are not with us. Never have been. This election is NOT R’s and D’s it’s about whether we want an America we remember or the transformation of America Hillary promotes. We need to wake up and realize what’s at stake, who’s with us, and who are not. Ryan “walked the plank” along with fellow so called R’s who walked with him. We need to thank them for such a clear message that THEY ARE NOT WITH US. They chose another agenda

He’s probably mad about Trump supporters booing him in his own district:

I really have no idea how he may have campaigned for him in the first place.

Trump supported Ryan… fool me once.