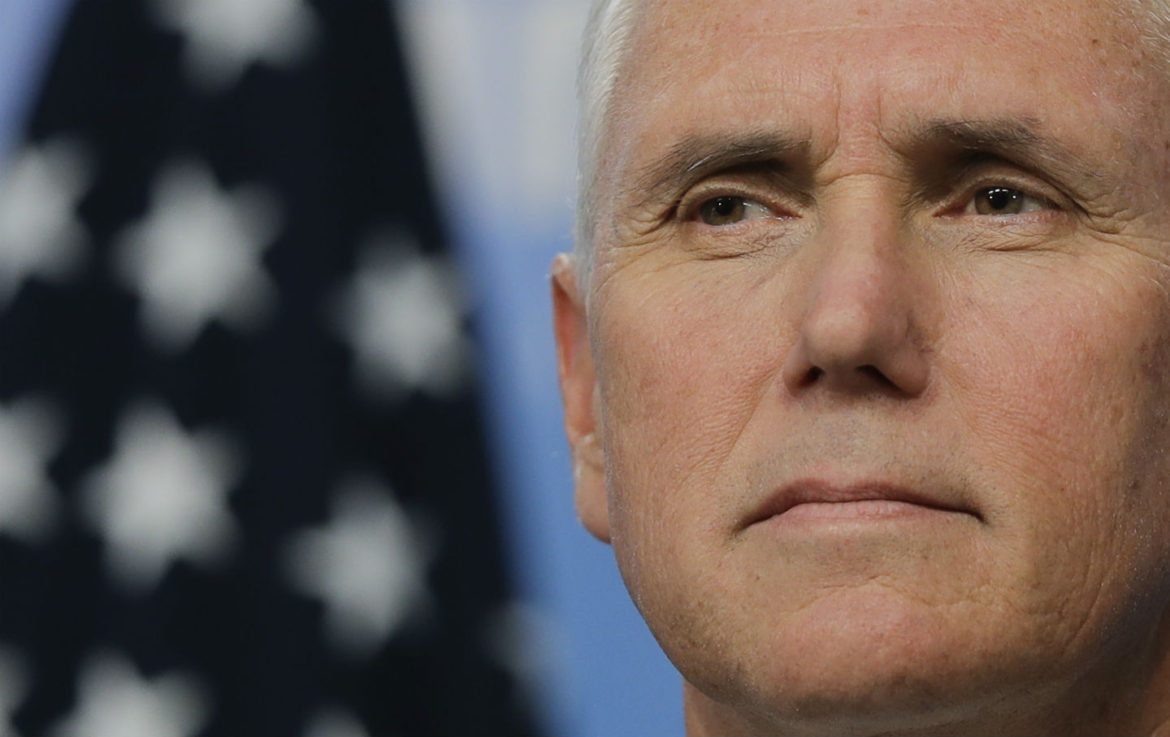 Statement by Vice President Mike Pence on Leaving Colts Game after Players Disrespect Flag and National Anthem
I left today’s Colts game because President Trump and I will not dignify any event that disrespects our soldiers, our Flag, or our National Anthem. At a time when so many Americans are inspiring our nation with their courage, resolve, and resilience, now, more than ever, we should rally around our Flag and everything that unites us. While everyone is entitled to their own opinions, I don’t think it’s too much to ask NFL players to respect the Flag and our National Anthem. I stand with President Trump, I stand with our soldiers, and I will always stand for our Flag and our National Anthem.
###
Statement by VP Mike Pence as he walks out of Colts game was last modified: October 8th, 2017 by Jeanine Martin

VP Pence learned a valuable lesson from Trump – you don’t have to subject yourself to abuse just for politically correct purposes.

“The National Football League and its 32 teams made $1.25 billion from corporate partners last year, according to sponsorship tracker ESP Properties. The list includes some of the advertising world’s biggest spenders. Visa Inc., Ford Motor Co., Nike Inc., Anheuser-Busch InBev, Microsoft Corp., McDonald’s Corp., PepsiCo Inc. and Bridgestone Corp. are among the league’s top-tier partners and almost all have remained silent on what was possibly the most political and polarizing Sunday in recent league history.”

The best answer is to boycott products made by these companies.

Here is the only way to get the thugs to stand at attention while in an NFL uniform. Isn’t it ironic that just as Congress doesn’t enforce our laws or even it’s own rules, the NFL doesn’t enforce its own rules either?

So sad to hear that freedom to dissent hurts our precious snowflake VP so much.

Apparently, you have no issue with players deciding to abuse and insult the fans. You see, that is what they decided to do rather than provide play for pay entertainment. The players have many places and times to dissent, but not on my dime.

“Freedom to dissent,” if that’s what you want to call it, works in both directions. Why do you begrudge someone’s protest of the anti-American NFL? Does it cut a little too close to your own America-hatred?

I think you mean funded by the fans as they are the ones, including Pence and his wife, who shelled out for the tickets. I wonder if you are capable of understanding the difference between protest in the public square and protest in a paid situation. Am guessing you would like to blur the distinction to include weddings, baptisms, and concerts like harvest 91 in Las Vegas

Or perhaps protests in gov’t jobs such as issuing marriage licenses for gay couples? I seem to remember that you and YOURS were all in favor of that protest but now when these players are protest you personally, you get your delicate feathers ruffled = hash tag so sad as your buddy Trump might say

I am not in favor of marriage licenses at all. At one time they prevented brothers marrying sisters and addressed mental incapacity. Now all they do is make money for the state. As far as gay marriage, I oppose it for many reasons but the law now requires that it be legal. I can abide by a law even though I oppose it and will continue to do so. Apparently, you don’t understand the distinction.

but what about the outrage when the state “forced” that clerk to do her job? Or the outrage when someone can refuse to bake a cake for a gay wedding? If you are truly opposed to free speech in the workplace, then you have to be against these incidents

So you agree with me that the state should not be involved in any of this. Without a marriage license, there is no problem – just get your union legalized. If a church wants to sanctify only heterosexual marriage, then they can call it holy matrimony. If a gay restaurant owner, as happened the other day, doesn’t want to serve Christians, then so be it as the marketplace will decide about his business. Every time the government steps in to solve problems between individuals it creates rights that empower one side and damage the other. The Bill of Rights is quite enough for me..

United We Stand,
divided some choose to fall.

One day we will all kneel for the proper reason.

Well, well, Steve. I bet you a box of donuts that this whole deal was staged from the beginning. I cannot prove it, but I think Pence knew those thugs were going to crawl on the grass like little babies, and he was going to walk out, when this thing was planned days or weeks ago.

If this was not staged for the unsuspecting, then why did Pence even go to an NFL game to start with in light of the thugs previous weeks behavior, and Trumps tweets?

And, why didn’t the rest of the people follow Pence to the exits? Indianapolis is a red state that Trump carried in 16′.

I know better than to take the bait. This staged event was minor league.

The empty seats at the Pittsburgh game tell a far more important story than the Trump rackets.

Yes, isn’t it outrageous that a politician staged a political event right on top of another politically staged event.

In other news….. the sun rose in the East this morning.

The whole deal is, no matter if you work for the NFL or government, when you are on the clock, you represent whoever signs your paycheck.

It will be interesting to see if the fans will join Pence in the future. It would be a massive disaster for the NFL if thousands left the stadium after the national anthem because of the players stunts. I really don’t see this situation as retrievable because the connection between the fans and the players have been severed thanks to obvious abuse of a privileged existence.

It’d be even better if they marched to the respective ticket offices and demanded refunds.