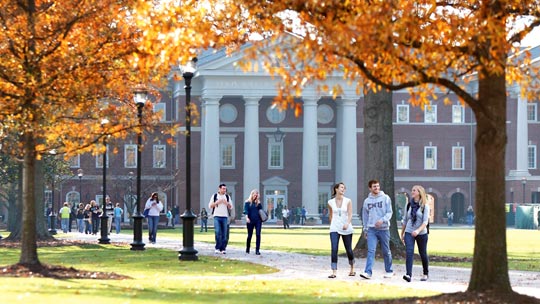 Pretty much since the dawn of time, Virginiaâ€™s public four-year colleges and universities have blamed soaring tuition charges on cutbacks to state support for higher education. So, this year the General Assembly funded significant increases in General Funding support, ranging from about 3% for the University of Virginia to 18% for the UVa campus at Wise. And in response, Virginiaâ€™s four-year public colleges dutifully reined in their increases for tuition and feesâ€¦

Har! Har! If you fell for that last line, you are truly a fool. As you can read in the previous post by Steve Haner, Virginiaâ€™s higher ed establishment jacked up tuition by roughly 6% on average, moderated by a somewhat more modest increase in mandatory student fees. The public colleges and universities did what they always do, which is charge as much as they can get away with. 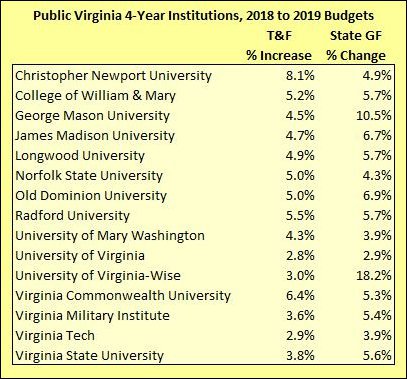 In the chart above I show the T&F (tuition and fee) increase for each institution between fiscal 2018 and fiscal 2019, based on figures provided by the State Council of Higher Education for Virginia (SCHEV) and published in Steveâ€™s post. Then I show the increase in state General Fund funding based onÂ the budget submitted by outgoing Governor Terry McAuliffe. (Note: These figures do not represent the final budget approved by the General Assembly and signed into law, which I cannot find online. While the legislature might have tinkered with the numbers, however, they did not change significantly.)

Compare the two columns and youâ€™ll see that UVa and Virginia Tech conducted themselves with restraint, hiking tuition & fees by the smallest percentages, even though the General Assembly gave them the most parsimonious increases in General Fund support. Every other institution raised rates in total disregard for the generous allotments bestowed upon them. Standouts were Christopher Newport University, which hiked fees by 8% in the face of a 5% increase in support, and Virginia Commonwealth University, which is extracting 6% more from its students despite a 5.3% increase in state aid.

Single year-to-year comparisons of state support can be tricky because sometimes the General Assembly throws in large sums of money to support strategically important programs such as, this year, cyber-security. George Mason University was the major beneficiary of that initiative, which may explain its 10.5% increase in state support. Also, it is important to view the actions of an institution this year in the context of their actions in previous years and in the context of state budget actions, such as cuts to budgeted state support made in response to a deficit scare in fiscal 2018. Therefore, a snapshot analysis like this should be viewed as preliminary and provisional for any given institution. But viewed as a whole, it is hard to avoid the conclusion that the higher ed establishment has hoisted its collective finger to Virginiaâ€™s students and taxpayers.

I have warned that continued aggressive hikes in tuition, fees and other expenses eventually would backfire on institutions with less illustrious reputations. I highlighted the risk that enrollments would decline, cutting sharply into revenues. So far, that hasnâ€™t happened. Yes, Iâ€™ll confessâ€¦ my fears have proven groundless. So far.

Whatâ€™s happening? EnrollmentsÂ areÂ declining at many smaller, less prestigious private institutions. Private colleges lacking big endowments to fund hefty scholarships are more expensive to attend than public peers receiving state support, and they are losing students As long as the small, liberal arts colleges continue to bleed students, the publics may be able to pick up the refugees and continue jacking up tuition without repercussions. Weâ€™ll watch the numbers and see how they play out.

In the meantime, parents of college-bound kids should expect no easing up on the increase in tuition and fees at Virginia publics. There is no indication â€” none at all â€” that they are satiated.Â  All colleges and universities have ambitious plans to advance their institutional glory.Â No amount of revenue is ever enough. They will continue raising tuition and fees as long as the market will bear it and taxpayers remain quiescent.

Our elected representatives have abandoned parents and college students in Virginia! These kids are graduating 30, 40, 50, thousands dollars or more in debt. They canâ€™t buy houses and start their adult lives the way we did in the old days. Meanwhile – schools like VCU pay former governor Doug Wilder $150,000 a year to do very little work. Heâ€™s been hired as an adjunct but teaches no classes and has no job description- none! He even has a secretary. What the hell does she do each day!? This is but one example of the proflagate waste of taxpayersâ€™ money at VCU. And what about kids who sign up for classes at VCU and never meet the professor who is supposed to be teaching the class? This is happening. Are the same professors using their offices at VCU to support their consulting businesses? Where can you go to work and spend your time running a personal business out of your employers office? No-where! I know someone who lost his job at VCU and now the school spends six times his salary and benefits to do the same work using contract labor. How can these things even be legal?

I have literally been contemplating starting a non-profit to combat this nonsense. If Republicans werenâ€™t the stupid party theyâ€™d be all over this issue. Mind you that the answer is not increasing state payments to colleges but making them more efficient.

In addition, you might want to look up how much in the way of grants and other assistance these universities get from the Federal government. There might be some useful tables available from the National Science Foundation.

â€œNo amount of revenue is ever enough. They will continue raising tuition and fees as long as the market will bear it and taxpayers remain quiescent.â€.

Thatâ€™s the key. The market must respond with appropriate price signals before any of this madness will stop. As long as parents are conditioned that paying for a 4 year degree for their child is the only way to be a good parent, though, the prices in the market for those increasingly worthless diplomas will continue to rise.,

All true. Except, I think the larger market distortion is the Gov’t student loan program. When the loans are available to practically anyone, for any education purpose, on such favorable terms as to make it make it feel like free money to be paid back at some distant future time when everyone will be successful and rich. Both parents and students generally succumb and take the money.

This injection of unlimited cash into the university system is the biggest source of unconstrained inflation. Too many people are in college because it’s the easiest path; no money down, pay back someday maybe. Unfortunately, the worst part is that many students have no idea what they are doing in college, and would be better off following Mike Rowe’s advice instead.

You are 100% correct. Economics 101. Easy money via student loans leads to hyperinflation. Higher education has become a racket. Parents and students beware.

So demand has nothing to do with your Eco101 equation? Hope you are not an adjunct anywhere!!

Demand is distorted by easy money. Since fully 1/2 of students don’t graduate, they shouldn’t have been there in the first place. If student loans were in any other part of the financial sector, we’d call them predatory loans.

Actually completion rates are up so there goes that theory.

Completion rates are something like 55%. That is terrible. Rates are so low because nobody cares if the kid is able or willing to finish the degree. Just keep the money flowing is what BigEd cares about. They are the same as big businesses: cold, uncaring, self-centered.

Again as there has been an increase in student loans there has also been a coincidental increase in completion rates. The two do not correlate as you claim…. so no…

This^, the gov’t is subsidizing education regardless of merit and schools cash in.

Gov’t funded scholarships and loans are not given to the best and brightest, they are given to everyone. Schools don’t need to turn away anyone bc regardless of student success, they will get the tuition. It’s free money for them.

Who loses? Students who shouldn’t have been there anyway and taxpayers.

Instead of marginal students being counseled that blue collar jobs are needed and pay well, they are coerced into thinking that a piece of paper is the golden ticket.

Actually, the parents I know are having conversations about the value of college. The costs are extraordinary and leave everyone with great debt. The curriculum is often watered down with the socialist agenda even in the science and engineering area. Work, military signup, vocational education, and apprentiships are looked at as viable alternatives.

1) No, no, no, stop government from guaranteeing, or co-signing, for repayment of student loans. That will stop the increases. Goverment backed student loans do nothing but subsidize big banks, and increase tuition.
2) Illegal immigration, go after the employers, that will about shut it down.
3) Dreamers. Exchange the total amount of Dreamers by shutting down the legal immigration of the identical amount. Fair.

But, none of this will ever happen because of our corrupt inside the beltway government. They never fix anything. Congress prefers to let the Catholic and Jew Court run the country.

Classic example? For anybody who thinks that Justice Kennedy putting the state sales tax case on the Catholic and Jew court docket on his way out the door wasn’t rigged? I got some real estate in Florida for sale….Congress refused for years to take the advice of SCOTUS in 1992-3 and deal with state tax across state lines.

It’s all rigged. The crooked American owned media which has been running America for years via fake news, and used Facebook to destabilize the middle east, showed Putin how to influence American elections. All Putin did was use what he learned from us, and Israel, on us.

What goes round, comes around!