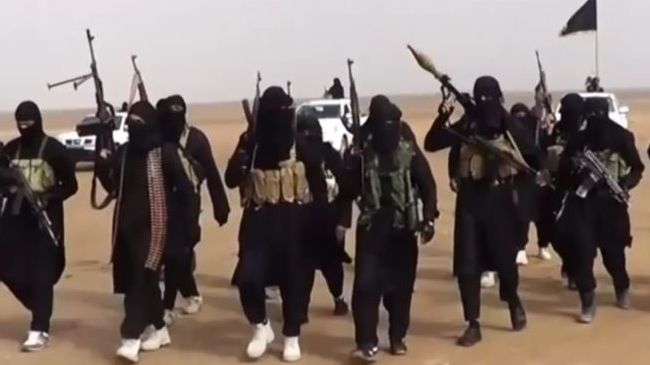 In the early morning hours of Sunday, June 12, a lone gunman entered “The Pulse,” a popular gay nightclub in Orlando, and promptly opened fire with an assault rifle and a handgun, killing 50 people and wounding another 53. Â The shooter, Omar Mateen, had recently declared his allegiance to ISIS before carrying out the deadly attack. Â While many are calling this what it clearly is, a terror attack, many on the left are determined to change the focus of the conversation to…you guessed it… gun control.

Ever since the San Bernardino shootingsÂ Obama and the left have been working very hard to move the focus away from radical Islamic terrorism, and onto…well, just about anything else. Â Now, however, we have another example of a terror attack occurring here at home, resulting in one of the bloodiest massacres in U.S. History. Â Instead of talking about how to make Americans safe from terrorist attacks, however, what is the left focusing on? Â Here’s a sample:

President Obama complains about the need for more gun laws. Â “This massacre is therefore a further reminder of how easy it is for someone to get their hands on a weapon that lets them shoot people in a school or a house of worship or a movie theater or a nightclub,â€ Obama said.

CNN is running a story about the new gun control calls prompted by this attack.

MSNBC’s Joy Reid says that the real point is not terrorism. Â She thinks that “we’re not getting to the core issue, which is how easy it is to get a gun.”

The Washington Post runs an entire story about “the key things to know about guns and mass shootings in America.”

Like a broken record, the left refuses to focus on terrorism, radical Islam, or the social and moral decay in this country they have facilitated as a root cause for increased violence. Â Instead they offer their Pavlovian response anytime a gun is fired and trot out their so-called “common-sense” gun laws that do nothing to stop gun violence. Â It doesn’t matter how many times you point out that none of their new gun laws, or even the existing gun laws for that matter, would have stopped what happened. Â All they can think about is how much better our lives would be if they could just take away everyone’s guns.

As my wife listened to the radio this afternoon, one of the talking heads was commenting about how having armed citizens at this nightclub would have just made things worse. Â I swear, every time I hear one of these idiots make a statement like that I just want to reach through the radio and shake them until the stupid drains out of their heads.

To the folks who think having armed citizens in that nightclub would have been a bad thing, I say this. Â Go and ask the families of any of the victims who died last night if they wish there was at least one brave citizen armed with a gun that night that could have at least had a chance to stop this fanatic before he murdered over 50 people. Â Go ask one of the 53 people that were injured if they wish that someone could have stepped up to defend their lives.

Better yet. Â Imagine you were there that night yourself. Â Now ask yourself as you face down a madman intent on ending your life. Â Would you want a gun in your hand or not?

There are two other points I wanted to make concerning this story:

First: Â During the Ferguson riots I heard many people, including voices on the right, calling for local police to do away with all their “military-style” riot gear in order to make the public “feel better” about assembling in the streets to protest. Â Well thank God the City of Orlando didn’t listen to that advice, as an officer was shot in the head last night while engaging the terrorist. Â The only thing that saved his life was the tactical helmet he was wearing. Â Here is an example of what the assault team was wearing to engage the shooter: 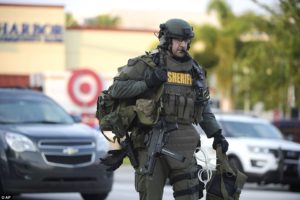 Photo: From the AP

We need to stop worrying about what police are wearing and how it makes rioting protesters “feel.” Â I don’t care how they feel. Â If there is a terrorist attack, or an armed robbery, or a bunch of rioters (excuse me…protesters) near me or my family, I don’t care if the police are wearing full-on Iron Man armor. Â I want them equipped to take on the bad guys and do it safely because the faster they deal with the threat, the more people’s lives and property will be saved.

Second: Â When Bill Clinton was in office we had a series of terrorist attacks on Americans, including attacks on US embassies in Kenya and Tanzania, the bombing of the USS Cole in Yemen, and the World Trade Center bombing in 1993. Â You could also argue that the weakness of the Clinton administration led to the boldness of the terrorists to pull off the 9/11 attacks in 2001.

After the 9/11 attacks George W. Bush invaded Afghanistan and Iraq, taking the fight to the terrorists and ending state sponsorship of terrorism in at least two Middle Eastern countries. Â Our forceful response even frightenedÂ Muammar Qaddafi from being an enemy of the U.S. into a reluctant ally against terrorism. Â Number of terror attacks on U.S. soil during that time? Â Zero.

Under the Obama administration we have removed our troops from Afghanistan and Iraq, kowtowed to Iran, and released terrorists from Guantanamo Bay that have…of course… gone right back to terrorism. Â We have effectively lost our place of leadership in the world. Â During that time we have had numerous terror attacks around the world, including at least three on American soil (the Fort Hood shootings, San Bernardino, and now Orlando).

The moral of the story? Â Bullies respect only one thing – strength. Â When a bully sees weakness, he attacks. Â ISIS and other terrorists are a collection of bullies, plain and simple. Â If you want to stop them, send the best military in the world to hunt them down and kill them, wherever they are.

I’m sure I will get plenty of responses about how we shouldn’t be the world’s police force, and that’s fine. Â But guess what? Â Someone has to do it. Â Someone has to be the leader of the free world. Â Barack Obama has decided he doesn’t want the United States to lead the world, and has pulled us back, leaving a power vacuum. Â Well, nature abhors a vacuum and when one appears, especially a power vacuum, all sorts of people will try and fill it. Â Most of them, unfortunately, are not the altruistic force for good the United States has been for the most part.

The United States can either lead, or it can follow, because if we don’t lead someone else surely will try.

I know which choice I prefer.

[…] As I have written before, if they want to die a glorious death trying to kill infidels, let’s go over there and give them what they want. Â Let these terrorists face American soldiers instead of allowing them to kill more innocentÂ children. […]

“shake them until the stupid drains out of their heads.” Love that.

One quibble: He didn’t have an assault rifle. He had a semi-automatic rifle.

I just can’t understand why the very plan and simple fact just doesn’t sink into American media reporting. Assault weapons ARE and have been for a very long time banned in the US, in effect since the passage of the National Firearms Act of 1934! A fully automatic weapon or as the layperson might refer to them, machine guns, includes any firearm which can fire more than 1 cartridge per trigger pull. Both continuous fully automatic fire and “burst fire” (e.g. firearms with a 3-round burst feature) which are considered machine gun features. Even these weapon’s receivers are by themselves considered a regulated firearm and NOT available for purchase or ownership except under very strict NFA registration with the Bureau of Alcohol, Tobacco, Firearms and Explosives (ATF).

I believe since so few Americans ever serve in any wing of the combat armed forces any more they just can’t get it straight that a cat is not a dog. Folks, there are NO assault weapons on the streets of America except those brought into the country illegally and sold on a black market, PERIOD. I’m not sure it is a quibble as the anti-gun contingency have made a boogeyman phrase to underlie their rabid gun agenda with the horror of the “assault weapon” on our streets and in the hands of any citizen that purportedly wants to buy one at their local gun shop that DOESN’T actually even exist. There are no assault weapons in America except in the hands of specially trained police SWAT teams and in the base armories of US military posts. NONE.

You know that and I know that, but to the left anything that shoots bullets out of it is an “assault weapon.” I was trying not to get caught up in the weeds of what to call it, and focus instead on the same, tired rhetoric coming from the gun grabbers.

Great response to the tragedy in Orlando. Too bad our fearless leader could not be as insightful. This particular peace loving muslim terrorist possessed a â€œSecurity Officerâ€ license in Florida and a â€œStatewide Firearms Licenseâ€ in Florida. Blaming a lack of “gun control” on this attack is pure lunacy.