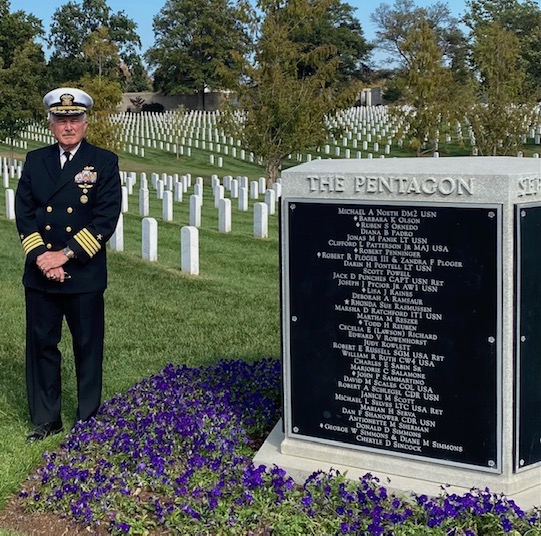 Thank you for Your Service

November 11th  marks Veteran’s Day previously designated as Armistice Day to commemorate the end of World War I – then known as “The War to End all Wars.” Hostilities ceased on the 11th hour of the 11th day of the 11th month of 1918 when the Armistice between our Allies and Germany went into effect.   People often confuse Veterans Day with  Memorial Day in May. Veterans Day celebrates the service of all U.S. military veterans, while Memorial Day honors those who have died while in military service.

As a thirty-year veteran of the United States Navy, I have witnessed firsthand key moments in our nation’s military history – some of these events were by choice and others were not. My first ship, the USS Leahy (DLG 16) visited  Leningrad in 1975 and was the first U.S. warship to visit the former Soviet Union since World War II. This port call was the first in a series of military-to-military exchanges and made the Soviet people aware of their economic depravity and lack of freedom leading to the fall of the Berlin wall  1990.

I also witnessed firsthand the abuse of drugs which was then the norm and racial confrontations that were widespread in all military services. The 1970s were a low point for all of our military services in the aftermath of our retreat from Vietnam. Disintegration of military readiness and unit cohesion now became the norm. During this era veterans typically did not disclose their status for fear of recrimination or spittle in one’s face.

As time progressed, I was fortunate to see this trend reversed through the implementation of the all-volunteer force and the rebuilding of our military into an effective integrated and “joint” (all service) fighting force. While assigned to the Joint Special Operation Command (JSOC) during Operation Desert Storm I witnessed firsthand the resurrection and triumph of the American military from its post-Vietnam malaise.

Our integrated strategy of “Shock and Awe” enable the United States to conduct precise and integrated air and sea strikes with impunity. Our forces destroyed Iraq’s ground, air, and naval forces with ease and our adversary Russia who had trained and supplied Iraq was stunned with our swift victory. Veterans were once again thanked vice spurned by a grateful nation -welcome home parades vice confrontations were the norm.

Subsequently, as Commanding Officer of USS Rushmore (LSD 47) we provided support to Operation Restore Hope. Here I witnessed our now proud and revitalized military providing humanitarian aid to those who would have starved without our assistance – Congresswoman Omar and her family benefited from our generosity. The same Congresswoman who now spurns the country who saved her!

In an effort to maintain peace, the debacle of Black Hawk Down transpired as forces on the ground were denied support required to conduct their mission by the Clinton Administration. My former boss Major General “Bill” Garrison assumed sole responsibility for its failure, unlike today’s leaders.

Shortly thereafter, as a member of the Navy Staff on the Pentagon on 9/11 I lost twenty-seven of my good friends and “Shipmates” when Flight 77 plowed into the office where I had worked just two weeks before. Subsequently while assigned to Joint Staff during our “War Or Terrorism”  I saw their loss avenged as we struck the Taliban swiftly and without hesitation and brought Osama Ben Laden to justice.

I suspect my experience as a United States veteran is typical of many others who have seen our military at both its lows and at its highs. Many of us armchair warriors now wonder how our military will respond to an almost inevitable confrontation with Communist China as that country vows to achieve world hegemony through both economic and military means.

Although resigned to watch our withdrawal from Afghanistan on the sidelines I have to wonder if military leaders such as my former boss General Wayne Downing a highly decorated U.S. Army Ranger would have left those who had helped this nation behind on the field of battle in Afghanistan. One will never know but somehow, I suspect we would have witnessed a different outcome.

While we will debate how the War in Vietnam, Iraq, and Afghanistan was mismanaged, one thing remains clear: The bravery and sacrifice of our American troops in the face of adversity is a constant reminder of who we are as a nation. Their selfless and unquestioned sacrifices represent the absolute best of this country. Regardless of your thoughts on politics or war, those who have worn this nation’s uniform deserve your heartfelt appreciation and gratitude.

On Veteran’s Day please thank a veteran for their service and do not be surprised if he or she responds “Thank you, you were worth it” because at the end of the day that is what  it is all about – one’s selfless service to  preserve your individual freedom and liberty

Thank you for Your Service was last modified: November 9th, 2021 by Guest Contributor James Poplar

Well right now it appears the administration would rather piss off SEALS and civil servants than honor them.

what do you mean?

Agreed. Thank you to all vets for being a part of helping me to live a life in a country where we can be free.