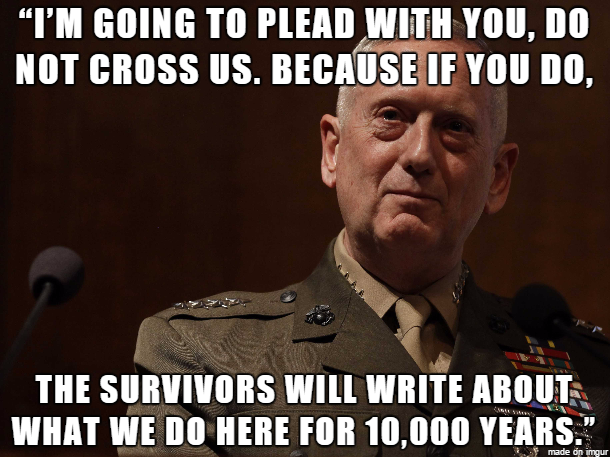 It seems likely that President Elect Trump will appoint retired General James “Mad Dog” Mattis to be Secretary of Defense.Â  Mattis is a marine’s marine, tough as nails. Â He was frequently opposed to Obama’s wimpy actions around the world. Â He has made some colorful comments over his 41 years in the service. His best quotes are here, and worth a read. Â I want this guy in Trump’s cabinet!

I largely agree with old_redneck that Matrix is a good candidate because he is not a hothead. The quotes in the Bull Elephant post are messages to Marines in combat who need encouragement to do their combat job of engaging a enemy dedicated to killing them. They are being asked to kill or be killed, and they need to know they have their comrades AND their commanders behind them. The other quotes are those of a leader who cares about his troops and is directing them on honorable behavior when not in the throes of combat. Mattis’
total career resume gives me great confidence he would serve the country well as SECDEF.

As usual, you republicans concentrate on the sizzle, not on the steak.

Yes, General Mattis has unloaded some colorful comments. But don’t expect him to “bomb the shit out of them.”

If you looked deeper . . . which is not what republicans do . . . you’d find the reality is quite different.

I served in Vietnam and have frequent contact with Bob Scales — Major General, US Army (Retired); PhD; retired as Commandant, USArmy War College. Bob says this about GEN Mattis: “….one of the most urbane and polished men I have known.” (Ooopss!!)

Following a Dept of Defense survey that showed only 55% of
American soldiers and 40% of Marines would report a colleague for
abusing civilians, Mattis told Marines in May 2007 that “Whenever
you show anger or disgust toward civilians, it’s a victory for al-Qaeda
and other insurgents.” Reflecting an understanding of the need for
restraint in war as key to defeating an insurgency, he added that “Every
time you wave at an Iraqi civilian, al-Qaeda rolls over in its grave.” (Hmmm. Wonder if Trump knows Mattis talks like this?)

Mattis was considered to be an intellectual among the upper ranks, with
his personal library numbering more than seven thousand volumes. Reinforcing this intellectual persona was the fact he carried
his own personal copy of the “Meditations of Marcus Aurelius” throughout his deployments.

The point here is this: GEN Mattis is exceptionally well-qualified to be SECDEF, but not for the blood-and-guts reasons you republicans trumpet. In fact, as SECDEF, he’ll likely put the brakes on the likes of Mike Flynn, Rudy-Tooty, Bannon, Kushner, and the rest of the Trump Peanut Gallery.

Who sends you this stuff everyday? It’s far too long for a comment on a blog post. Get your own blog because people here are simply not going to read all that.

CTR database, think we have had at least two wearing that hat as the stories don’t jibe.

Buy the way, Trump says “I know more about ISIS than the generals.”

The truncated lines indicate a copy and paste job.

Of course it’s a copy and paste. I wonder whose work he is stealing?