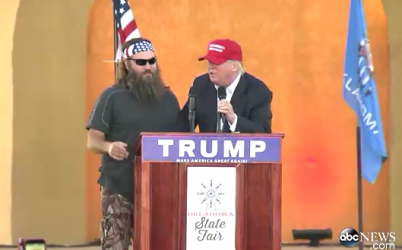 The Donald comes to Virginia Beach

When Scott Walker bowed out of the presidential race last week, he parted company with his erstwhile rivals by offering a warning: Trump must be stopped.

Supporters of the billionaire candidate said this was further evidence that the GOP “establishment” views Trump as a threat to their privileged status. Which is undoubtedly true.

However, the real danger motivating Walker’s admonition is that Trump is likely not electable as the Republican nominee. If some of the more recent polls are to be believed, it seems many likely Republican primary voters have begun to come to the same conclusion.

Whereas Trump had a solid upward trajectory over the summer, the latest polls show stalled or falling numbers for him. Make no mistake, though. Trump remains the frontrunner by a pretty wide margin. But he does seem to have hit some sort of a ceiling on his support, whether temporary or not. From Politico,”Trump Momentum Shows Signs of Stalling“:

Curt Anderson, Bobby Jindal’s chief strategist, when asked whether Trump had peaked based on recent evidence, had some harsh words. “I think the bloom is off the rose for sure. Every act gets old. Plays run on Broadway only for so long. The first five times he calls people an idiot it’s funny. I think at this point, it’s kind of gotten stale.”

Recognizing that the arrogant-bombast-and-insult strategy has a limited shelf life, Trump has, to his credit, moved to introduce serious policy proposals, and to put some real substance behind the rhetoric, including by introducing a laudable effort on tax reform. (Personally, I don’t like any proposal that leaves most people without any skin in the game, but overall it is a good, pro-growth proposal).

Whether this kind of thing is enough for Trump to escape the kinds of implosions other early frontrunners have faced (think Herman Cain) remains an open question.

One leading indicator may be attendance at his events. He’s apparently had problems: 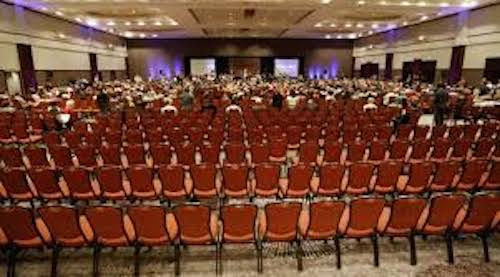 Another such event is coming up this Friday evening in Virginia Beach. Trump is scheduled to appear at the Wave Church and Convention Center. The venue holds 2,500. When Trump has had problems filling up hotel conference rooms, a 2,500-person auditorium might be a little ambitious on four days’ notice.

If he fills the venue or doesn’t, it isn’t necessarily dispositive of anything, of course. But Virginia is a bellwether for these kinds of things, and we might get some clues as to how the next few months of the campaign are going to start playing out.

I wonder if this weekend’s weather could affect the crowd turnout? Stay safe this weekend, my fellow Virginians, and LET’s GO, HOKIES!

I’m not a Trump fan, but I hear it’s going to be YUGE, so YUGE it could break a piece of slate.

The Virginia Beach event sold out in a few hours not days.

The “Donald” falling in the polls? Wonder why?

Could it be the all out blitz by the likes of the Republican Party, the Democrat Party, the establishment, Faux News, hate radio, and anybody else with a camera or microphone to tackle Trump? Bashing Trump is something even BE & BD can agree on.

I have not made my mind up, no need to. But when I do, it will be my decision, not the decision of any of those listed above.

What are you afraid of Steve? Why don’t you let the voters make up their mind? You think they are to stupid?

And the establisment dogs know it.

You’re off your meds again, Jim.

You talking about the 8 year prescription Bush 43′ wrote for this country? Or, the prescription McDonnell wrote for Virginia? HB 2313, a prescription for the largest tax increase in Virginia history?

Yea, I stopped taking them.

You are absolutlely correct.
And I am glad that ” illegal immigration ”
is at the forefront a welcomed change for the Republican Party but can he drag the rest of the party that exploites them along?
He has tackled Immigration , Defense , Taxes.
Who are the other Republicans?

I will be there!

I wish I could be there Friday night.