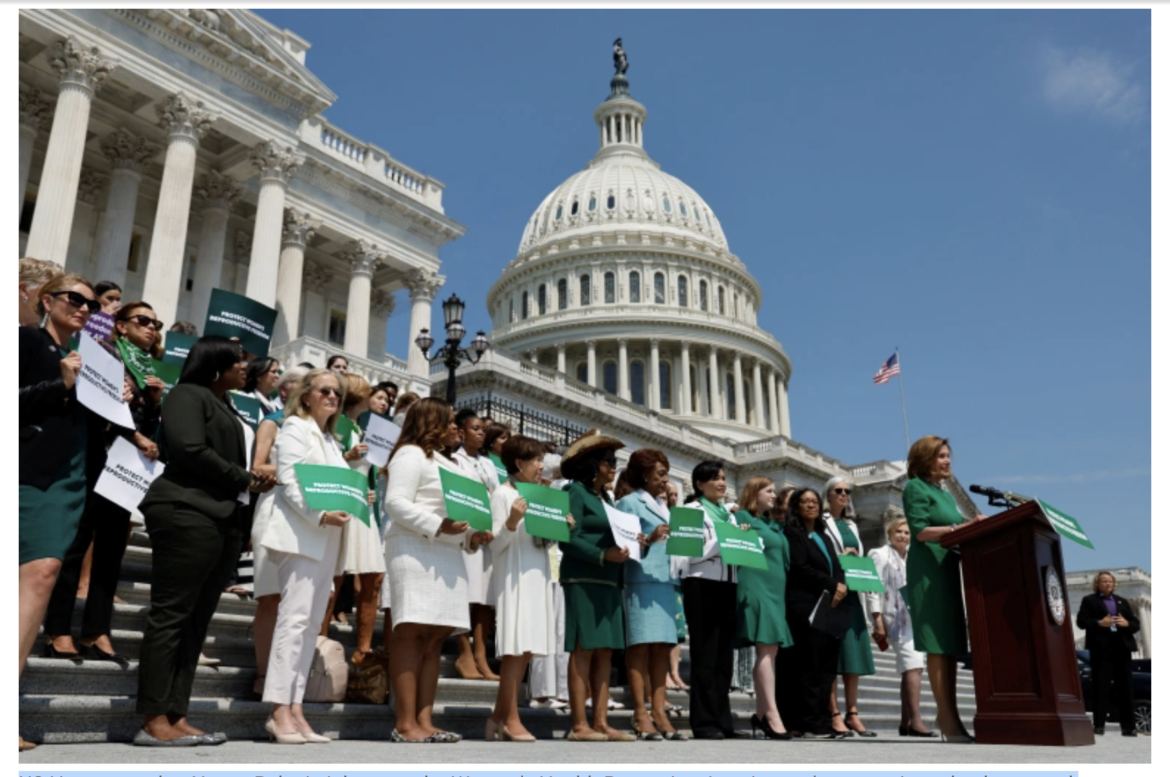 Congressional Democrats and their supporters are seeking to enact a federal statute to ensure what they consider to be abortion rights.  Their efforts are short-sighted and offer an illusory solution that does not definitively settle the issue of abortion.

Apart from the constitutional limits on Congress’s legislative authority, there are prudential reasons why Congressional Democrats and their supporters should refrain from trying to enact a federal statute to ensure once and for all what they consider to be abortion rights.

Accordingly, even if Federal courts were to conclude that Congress has the authority to enact legislation that preempts all State laws limiting or restricting abortion, then Congressional Democrats cannot guarantee that a future Congress will not enact (1) new legislation that repeals that earlier legislation; or (2) new legislation limiting or restricting abortion rights that preempts all State laws granting broad abortion rights.  Federal supremacy is politically neutral and does not favor or disfavor legislation on the basis of which political party was in the majority when the legislation was enacted.

In the wake of the SCOTUS decision overturning Roe v. Wade, we are now hearing about “adoption” — all the pro-birthers are saying, well, if you have an unwanted pregnancy, just put the baby up for adoption.

Shall we assume that all you Bullshtting Elephanters have signed up with local adoption agencies?

Millions of people across the country are desperate to adopt a child of any race, creed, or color. There are simply not enough babies and children to meet the need. How many conservatives do I know who have adopted children from the US and around the world? Many, including our current candidate for Congress in the 10th district, Hung Cao, who went to Thailand to adopt his little girl after having several bio children. Another conservative couple I know had 2 bio children and then opened their hearts to adopt a little girl from China. One of the very active couples on the local Republican Committee adopted a sibling group of 3 Black children. The parents are white and have provided a wonderful home for years now for these terrific children. A very conservative neighbor has 12 adopted children, including 8 who are severely handicapped, most of whom have Down Syndrome. I could spend hours telling you about the conservative families I know who have adopted children.

How many Democrats do you know who have adopted children, particularly children of another race? And/or children with handicaps? I personally don’t know any. Not a one, although I am sure there must be some, somewhere.

Every single one of those aborted Democrat babies would be adopted immediately, within days of their birth. There is no such thing as an “unwanted baby” in America. There are millions of families waiting for them. How do I know this? I was an adoption social worker and saw the lists of parents waiting to adopt from across the country. Later I counseled families desperate to adopt. Finding homes has never been a problem, it’s finding available babies and children available for adoption.

You might want to check before you make such statements, making yourself look very uninformed.

Please share some of the adoption stories among your liberal friends. We’ll wait.

And now what you are saying is, let’s let women breed children for adoption.

Vaginal Kaine if you didn’t have your head stuck up your arse so far… Do you know any actual black people? I do scumbag… And families I know have tried to adopt black children . It took them years to do so… Mr Black Lives Matter white liberal douchebag. You live in your white liberal fantasy world… There are no black children because of the high level of abortions in the black community. You are always throwing racism at other people…You have supported black genocide for decades. But I bet you have a BLM sign in your nice white neighborhood lawn..

You do realize that Vaginal Kaine is your friend Old Redneck right? The guy you banned and I believe he is now posting here under multiple screen names. You can confirm that.. You need to be rid of this guy once again.

“How many Democrats do you know who have adopted children, particularly children of another race? And/or children with handicaps? I personally don’t know any. Not a one, although I am sure there must be some, somewhere.”

and the same is true of any legislation passed by the states. So what?

We all know that Conservatives hope to pass abortion restrictions at the federal level and will if they ever get the trifecta again. Will be interesting to see how they suddenly argue it is perfectly fine and dandy to do so then. We all know nothing will become federal law any time soon because of the Senate rules (well, at least until Republicans scrap the filibuster – if/when they hit the trifecta – which we all know they will do in a hypocritical heartbeat given the chance to pass a federal abortion ban). The point of this legislation (just like the recent attempt to pass protection of birth control legislation) is to get the votes on the record for the public to see… notice how Conservatives refused to vote for legislation protecting our rights to access and use birth control… speaks volumes. Republicans will vote the same way on a legislative protection of a woman’s choice on termination of her pregnancy…. we all know that and it will be a matter of record now…

I don’t hear you talking about the need for Covid totalitarianism anymore little Erica… While you go all hysterical over having to apply democracy to the issue of abortion instead of a judge legislating it… you wanted to make the government force a useless vaccine on people.. At least have enough sense to be consistent crapforbrains.. See dumbass…you support abortion and you support people’s right to choose whether to get vaccinated. That would be logical… but that is beyond your little bitty liberal Democrap brain…

Hey Erica.. not on topic but when are you and your bros on topic… I am sure this article will bring you here… So how about that great Covid leader you have there Erica… the moron who declared that if you get the vaccine, you won’t get covid nor will you give it anyone! Now has Covid… thank God he got the shot and boosted and and and…AND the great and powerful Fauci… brought to you by Pfizer… ALSO got Covid… and rebounded on the expensive drug therapy..
As usual crap for brains… everything you think is just stupid… Covid is running rampant… Told you numbnuts. Time to shut down again is it ERica… no its not. That will ruin the Democrats last chance to retain Congress and impeach Trump for the next hundred years.. So you are pivoting faster than a speeding train away from that issue..
You and your gang are so free of the ravages of intelligence Erica. You better not go to that mall Erica… you’ll catch your death from Fauci’s China virus there in the land of the liberal vaccinated…

But they WILL try! You know that. If they succeed in stealing 22 and 24 there will never be another congress to rescind the laws that they pass. If the courts, after years of delay while the cases drag through the system, should rule against them, they will merely change some minuscule feature and pass it again. In the meantime babies will be murdered to appease their god Molloch.

But they WILL try? You know that. If they succeed in stealing 22 and 24 there will never be another congress to rescind the laws that they pass. If the courts, after years of delay while the cases drag through the system, should rule against them, they will merely change some minuscule feature and pass it again. In the meantime babies will be murdered to appease their god Molloch.