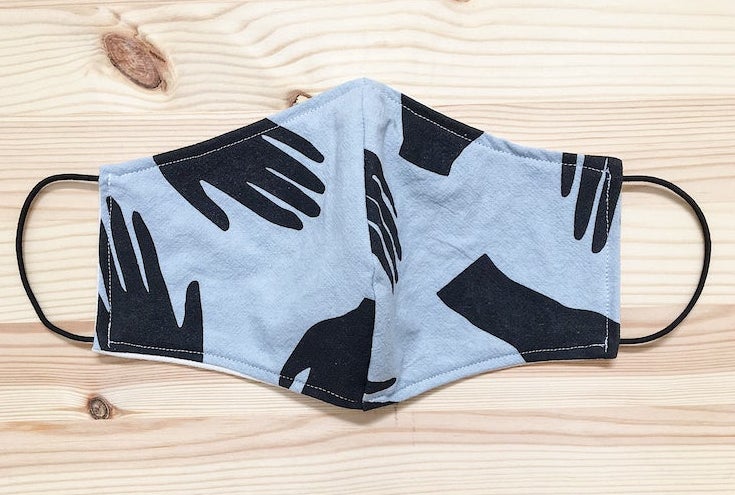 The Modern Scarlet Letter “M” for Mask by Mimi Johnson

I am privileged, as liberals like to tout, that I live in a state, that for all intents and purposes, has remained somewhat sensible during this insane and what I consider, unnecessary lockdown.  In the beginning of this fiasco, my company was deemed “essential” and therefore have stayed open through all the insipid social changes.  Initially, we were not allowed to wear masks or gloves in the workplace, which was fine by me, as I found them cumbersome and infringing on my ability to breathe, however, about 4 weeks in, all of a sudden, they were mandatory.  I found this quite odd and in my rational mind, I had to ask questions and cause a “disturbance in the force.”

This new policy caused me more duress than the virus itself.  It became evident that the company was not interested in our safety by any means, but more so for their financial safety.  If anyone were to contract the virus, they would be open to various lawsuits. Since I often question everything, I asked if it were possible to avoid wearing a mask due to personal reasons, especially since in 4 weeks’ time, no one in my location had shown symptoms or been diagnosed with the virus.  The response was swift and unapologetically “no.” In fact, I was asked why I was being so “defensive” about wearing the masks. I felt judged because I questioned this decision, when two days prior, the items were vehemently not allowed.  Needless to say, I now don a mask that is ironically manufactured in China, have no choice over my own personal health, and in order to stay gainfully employed, must comply and not question it.
So, I begrudgingly began wearing this ill-fitting, strange smelling mask, not for my protection but for “others.” Not only is it physically uncomfortable, but for someone who works in customer service, it does not allow you to communicate effectively with people in person and definitely not over the phone.  Day after day, customers come in and self-righteously comment on how we choose to wear the mask, mainly below the nose so we can breathe effectively, continually treated like a diseased pariah that is committing horrible crimes against humanity. Customers have even gone as far as complaining on surveys that my associates removed their mask momentarily to answer the phone.  Oh, the horror of attempting to communicate effectively with customers on the phone!  The injustice!

I think the pinnacle of my COVID-19 experience happened recently at Trader Joe’s.  Although NC does not require wearing masks in public, Durham County Mayor has put orders in place that you may not enter an establishment without a mask.  For this reason, I generally travel to the neighboring town of Chapel Hill, to do my shopping.  I always keep a spare mask in the car just in case the establishment requires one, but on this day, it was 85 degrees, and I was not interested in wearing a mask to buy vegetables.  I made my way to the door, which now has a stanchion maze in front of it, effectively putting each customer on parade in front of others.  As I walked past each of the masked faces, I felt the red-hot flush of judgment sweep across my body. It was a clothed Cersei Lannister moment, walking to my shame.  I immediately began checking myself for garment malfunctions, but deep down knew why I was getting the stares, I had committed social justice suicide and now might as well pin a scarlet M for mask on my shirt.

Nathaniel Hawthorne’s novel, “The Scarlet Letter” seems like such an apropos metaphor in this instance.  We currently follow and worship the CDC like they’ve been bestowed the divine right of Kings by the Catholic church, much like we revere Priests and Reverends, insert Reverend Dimmesdale, society is Hester Prynne, in a secret romance with liberal ideology and the guilt placed upon anyone disagreeing with their sentiments, and society’s chaos is the evil offspring of that dalliance.  As I continued my “walk of social shame,” I held my head high, and continued to the back of the line.  I was not going to bow to the ridiculous constructs of liberal puppets and be shamed into drone thinking.  As I am standing there in the brilliant and abundant sunlight, relishing in my freedom, I could not help but notice the social distancing stickers on the sidewalk.  Ironically, they were not even 6 feet apart.  I began laughing uncontrollably to myself thinking how ridiculous and asinine this entire debacle had become and how these managers either were not able to measure 6 feet accordingly or were just lazy, either way, the hypocrisy was on full display, but no one was paying attention.

This seems to be the constant theme of our entire society: never paying close attention to details.  Social isolation has not only affected immunology and mental health, but has also seemed to digress our Evolution; everyone acting like savage Neanderthals, hoarding supplies and food, as if they’re in constant threat of a neighboring tribe coming to raid their findings. Our modern society took thousands of years to cultivate and develop, yet in a span of two months, we have managed to ruin infrastructures, like an episode of “Life without people.” I do not know whether to be impressed or frightened.

I, for one, am ready to change the narrative, are you?