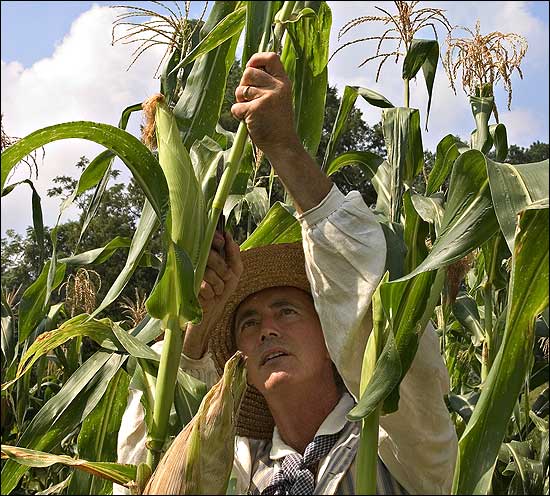 As we approach the upcoming election and Thanksgiving, it is appropriate to revisit a bit of the history of the Pilgrim commune which left England to practice its version of religion.  Blown off course during its attempt to reach Jamestown, it landed in what is now Plymouth Massachusetts.

Many of us have seen the painting of the Pilgrims sitting down with the Indians to enjoy a bountiful harvest feast.  However, not so many of us know that the Pilgrims were forced by circumstances to abandon their â€œcommune-ismâ€ and embrace the beginnings of a free enterprise system.

Pilgrim Governor William Bradford described in the book â€œOf Plymouth Plantationâ€, the problems with the Mayflower Compact, specifically the problem with the sharing of â€œall profits & benefits â€¦ in ye common stockâ€:

â€œThe failure of that experiment of communal service, which was tried for several years, and by good and honest men, proves the emptiness of the theory of Plato and other ancients, applauded by some of later times, â€“ that the taking away of private property, and the possession of it in community, by a commonwealth, would make a state happy and flourishing; as it they were wiser than God â€¦

â€œFor in this instance, community of property was found to breed much confusion and discontent; and retard much employment which would have been to the general benefit â€¦

â€œFor the young men who were most able and fit for service objected to being forced to spend their time and strength in working for other menâ€™s wives and children, without any recompense â€¦â€

â€œThe strong man or the resourceful man had no more share of food, clothes, etc., than the weak man who was not able to do a quarter the other could. This was thought injustice.

â€œThe aged and graver men, who were ranked and equalized in labor, food, clothes, etc., with the humbler and younger ones, thought it some indignity and disrespect to them.

â€œAs for menâ€™s wives who were obliged to do service for other men, such as cooking, washing their clothes, etc., they considered it a kind of slavery, and many husbands would not brook it â€¦â€

â€œIf all were to share alike, and all were to do alike, then all were on an equality throughout, and one was as good as another; and so, if it did not actually abolish those very relations which God himself has set among men, it did at least greatly diminish the mutual respect that is so important should be preserved amongst them.

â€œLet none argue that this is due to human failing, rather than to this communistic plan of life in itself â€¦â€

â€œI answer, seeing that all men have this failing in them, that  â€¦

â€œSo they began to consider how to raise more corn, and obtain a better crop than they had done, so that they might not continue to endure the misery of want â€¦

â€œAt length after much debate, the , with the advice of the chief among them, allowed each man to plant corn for his own household â€¦

â€œSo every family was assigned a parcel of land, according to the proportion of their number â€¦

â€œâ€¦ This was very successful. It made all hands very industrious, so that much more corn was planted than otherwise would have been by any means the Governor or any other could devise, and saved him a great deal of trouble, and gave far better satisfaction.

â€œâ€¦ The women now went willing into the field, and took their little ones with them to plant corn, while before they would allege weakness and inability, and to have compelled them would have been thought great tyranny and oppression.â€œ

A similar situation occurred in the Jamestown colony even though that colony originally had no women or children.Â  Some of the men considered themselves the superior of others by nature of birth and would not participate in manual labor.Â  Eventually, a â€œno work, no eatâ€ policy was established, and the Jamestown colony was able to survive.

It is not surprising that the failures of communism and socialism in early America are all too often ignored.  There is a very strong vein of both ideas embedded in the welfare state â€“the fundamentals of which havenâ€™t been challenged with much success.  Interestingly, the emerging situation of pandemic and riot have brought to the forefront the ideas long abandoned by the Pilgrim and Jamestown settlers.  Today, the question is about tax base and real estate versus the value of â€œsocial -istâ€™ services in the cities and states.