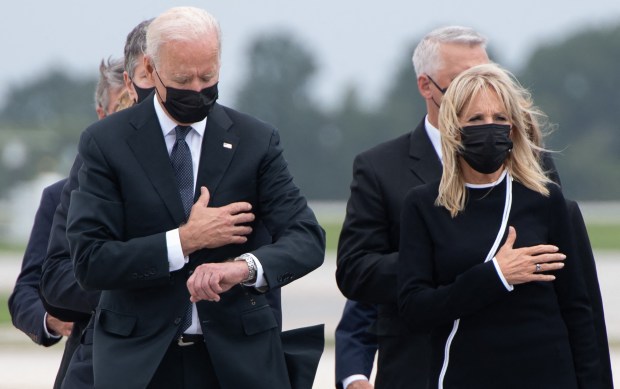 Joe Biden repeatedly checked his watch as he attended the dignified transfer of the remains of a fallen service member at Dover Air Force Base in Dover, Delaware, August, 29, 2021, one of the 13 members of the US military killed in Afghanistan last week. (source: Getty Images)

The President Had Somewhere Important to Be

I watched.  I am sure I had lots of company.

In an unblinking story for The Washington Post, Matt Viser exposed a failure of leadership and understanding of the moment that was a direct insult to all Americans.

The President was there to represent us all. He shamed us.

For Biden, it was all about his son Beau, a military lawyer that served in Afghanistan. From the Post:

â€œWhen he just kept talking about his son so much it was just â€” my interest was lost in that. I was more focused on my own son than what happened with him and his son,â€ Schmitz (the father of one of those killed) said. I’m not trying to insult the president, but it just didnâ€™t seem that appropriate to spend that much time on his own son.â€

Whatever the appointment was for which Biden constantly checked his watch, not just on the tarmac but, unbelievably, during conversations with the families of the fallen, it must have been very important.

â€œSome of the grieving relatives felt a need to interact directly with the president after losing their loved one, including Jiennah McCollum, who married Rylee McCollum just six months ago and is due to give birth to the coupleâ€™s child next month.â€

â€œGigi wanted to look him in the eye and hear him,â€ McCollumâ€™s sister Roice said in a text message to The Washington Post, using Jiennahâ€™s nickname.â€

â€œRoice recounted that Jiennah left disappointed. The president, she said, kept checking his watch and bringing up Beau.â€

Schmitz said he grew agitated every time he saw Biden check his watch. And at the end, there was another outburst of emotion.

As the families began loading back onto their bus, one woman grew emotional and began screaming in Bidenâ€™s direction across the tarmac.

â€œShe said, â€˜I hope you burn in hell! That was my brother!â€™â€‰â€ Schmitz recounted.

The President Had Somewhere Important to Be was last modified: August 31st, 2021 by Guest Contributor James C. Sherlock

Good article. Jim, I worked in support of DARPA from 2003 to 2005. By any chance, did you know Brian Sharkey or Doyle Weishar? They were my bosses at SAIC.

Bea was apparently the only decent member of the Biden gang. So he gets trotted out whenever there is a need to say something about honesty. It is a pretty obvious gambit.

Was his son Beau a Medal of Honor winner in Iraq? Did Beau leave the safety of staff officer’s offices during his stay in Iraq? I ask because if I have to hear about Beau one more damn time I am going to puke. He of course drug that crap out when he was speaking to the families of the dead personnel… One father took issuance with it.

I guess Creppy/Corrupt/Demented/Sleep Joe has to use his only family member who served but of course did not get a hair of his head singed during his supposed service in a reserve unit. You know Joe couldn’t serve in Vietnam because he had asthma… This despite playing two college sports. So Beau is a stand in for the old Biden bravery!!! His other son Humper certainly never accomplished much unless you consider being a crackhead something.

Joe can’t really function beyond the swamp anymore. Did you see the speech where the news feed ran after it was over? Joe asked should I say anything else to Pelosi. and Pelosi doesn’t even look at him but speaks to whomever is controlling the video and says: We don’t need to hear anything else from him… Very telling as to what you have now. “from him”
So it is little wonder why he cannot act decently to parents his stupid administration managed to kill in that idiotic bug out. Aside from the forty years of being insolated in the Swamp, he’s not really all that functional anymore.
God bless the souls of the kids who died in that travesty.