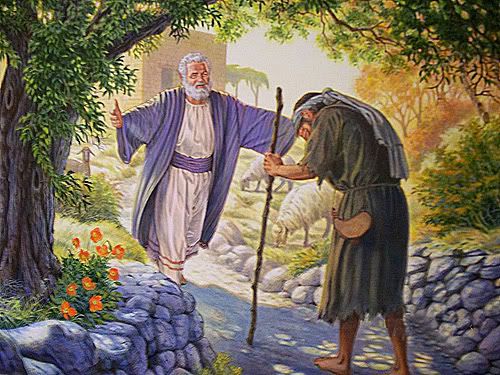 The Prodigal son returns to his father

“The Prodigal Son” is one of the best known stories in the Bible. If you aren’t familiar with it, you can find it in the Gospel of Luke, chapter 15, verses 11 through 32. (I recommend reading all of Luke, just on general principle.)

In this story, a man had two sons. The younger son decided he wanted his inheritance early, rather than waiting until his father died, so that he could go and live “the good life.” He went “into a far country” and spent everything on his friends, yet when he ran out of money, those so-called friends ran out on him. He was bankrupt and friendless. Then a famine struck that country, and the younger son was reduced to working at a filthy, disgusting job that still didn’t provide enough food for him to live.

Finally, he got smart. He remembered that his father’s servants had plenty to eat, while he was starving. So, he decided to tuck his tail and go hat-in-hand to ask his father for a job as a servant. Instead, his father welcomed him back into the family with great joy.

A commentary my wife and I were reading the other day about this story used the phrase, “He didn’t know what he had until he lost it.” That sounds too much like America today.

When Donald Trump was President, the media constantly ranted about how awful he was, and Americans believed the lies. They also believed Joe Biden’s campaign lies. As a result, Americans took their inheritance of liberty and went into a totally different philosophy of life and government. It didn’t take long for Americans to find themselves well on the way to a bankrupt society.

The price of petroleum products – gas, oil, plastic – has doubled in less than a year. And the administration not only doesn’t care, they laugh about it. They plan to shut down a pipeline in Michigan that provides the propane that 90 percent of Michiganders in the Upper Peninsula need to heat their homes in their decidedly frigid winters. And the administration America elected doesn’t care.

Transportation is a problem due to the doubling of gas prices. That prevents people not only from visiting relatives during holidays but also from driving their children to school. Speaking of school, federal policies have changed in the last year to speed up the indoctrination of our children in camps called “public schools.”

The increase in gas and diesel prices raises the cost of everything that has to travel by truck or rail – there are no electric trucks or solar powered trains. It affects the supply chain. Manufacturers can’t get materials to make products, and retailers can’t get products to sell. There are too many empty shelves in this country, a country that was once known for its bounty.

And like the prodigal son, Americans have started to realize the mess we are in and have decided to go back home. That doesn’t mean they are becoming Trump supporters, but it does mean that they are going back to the type of society and economy that Trump’s policies encouraged and made into reality.

Parents are taking back their schools. In Bedford County, two candidates for school board were elected as write-in candidates, because parents wanted school board members who would listen to them.

In Virginia, conservative candidates won all three state-wide offices and retook control of the House of Delegates.

In New Jersey, a conservative truck driver who spent less than two thousand dollars on his campaign beat the liberal president of the New Jersey state senate even though the incumbent spent almost a half million dollars.

Similar election results occurred all over the country in local elections because Americans have seen the mess we are in and have decided to return to the much better life of constitutional government and a capitalistic economic system, both of which will welcome them back with liberty and personal opportunity.

It’s about time this prodigal nation comes to its senses and returns home to the principles that made us great.

You’re crazy. Th GOP does nothing good for working Americans. They are not familiar with the concept

“Awake not woke” is real.