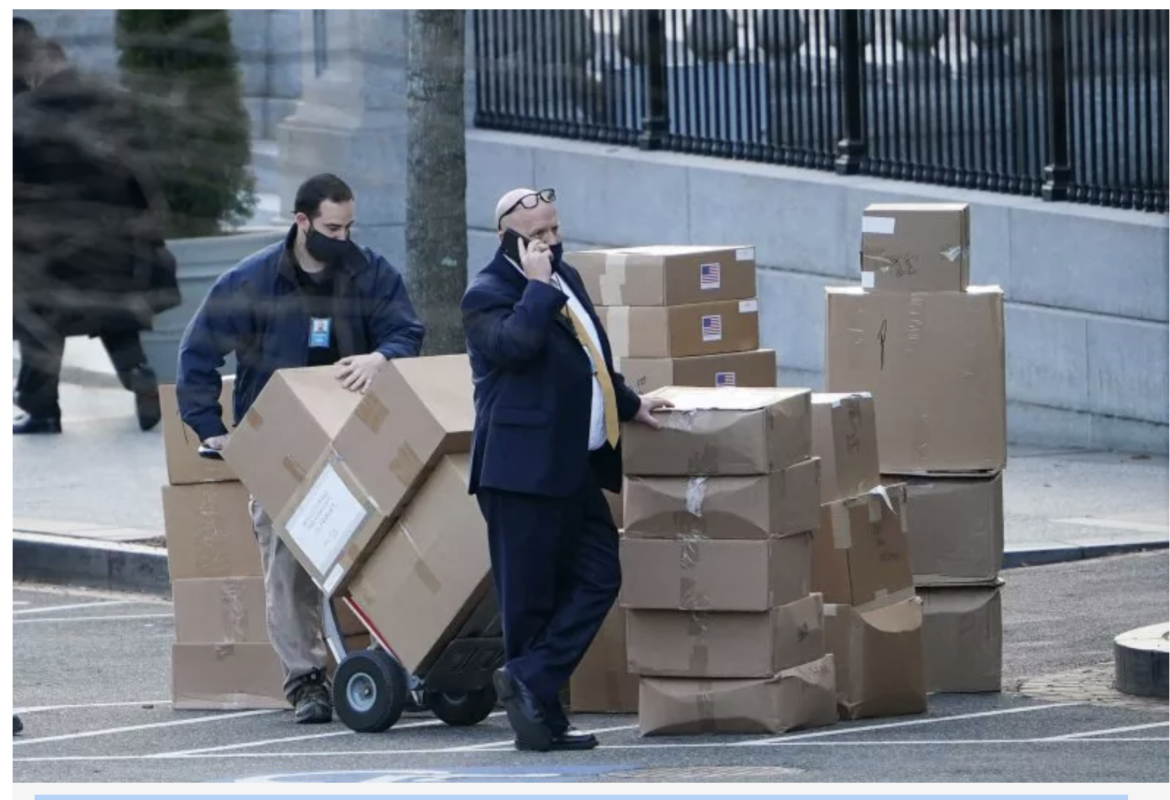 Dozens of boxes were moved with the use of trolleys near the White House on January 14, ahead of Donald Trump's scheduled departure. (MANDEL NGAN/AFP)

By now, most of us know that the FBI raided the Trump Mar-a-Logo estate.  They seized a number of boxes.  Some of the boxes may have had items with “classified” designations.  President Trump, in accordance with his executive power while President, has said that he declassified all the boxed materials prior to his departure from the White House.

I think a few questions about the claims of misuse of the President’s executive authority are relevant.

Answers to these situational timeline questions are needed.  The actions by the FBI are suspect.  Further, as each of the above questions is addressed, it is likely that more questions will arise regarding the sponsoring and conduct of the FBI raid.

The most troubling aspect of this raid is that it represents a pattern of continued FBI threats, as well as physical intimidation, against Trump officials and supporters.  The tactics are indicative of a political attack on administration opponents by weaponized federal organizations and agencies.

The FBI and the Biden Administration have much to answer for here.

The Raid and the boxes was last modified: August 15th, 2022 by Dr. Robert Warren

“The tactics are indicative of a political attack on administration opponents by weaponized federal organizations and agencies.”

Yea, no mention of who the snitch is inside Trumps inner circle. Trump and his elf’s are sweating now, pointing the finger at each other, checking everywhere for bugs. The walls have ears. Don’t print those 2024 ballots yet.

Trump is in deep fertilizer. Maybe they are not going to let a dictator wannabe overthrow the government?

I suspect this is just a warning to Trump not to run. Pull out the forks, he’s done.

Lots of lies being told. Your comment includes some.

Is there a lawyer in the house? Anyone? Raise your hand? Anyone? Bueller?

Trump can’t get a competent attorney to represent him, so, he’s stuck with D-list ambulance chasers.
https://www.rawstory.com/trump-lawyers-2657872836/

Well…. I am not getting my hopes up over the GOP INC doing anything about this outrage. They’ll hold some hearings… oh maybe push the appointment of a special counsel… the Controlled oppostion!! And what will happen?
Nothing… They’ll wind your ass up to vote for them and then Turtle McCarthy et al will make their deals and make their fortunes and you will get all excited… Say how is that Durham investigation going for example?
In the words of Frank Zappa… Politics is the entertainment branch of the Military Industrial Complex…
Enjoy! I know that Vaginal Kaine, Erica, Dunderhead Martin are useful idiots that enjoy the Big Democrat Show that they are too stupid not to swallow…
And some of the cuckservatives still think that W was a great President who won the war on terror.. He won the war on fiscal sanity.. 4 trillion dollars spent on what???
And don’t think that the GOP INc wont shove the culture wars up your bottom… they are afraid of being called homophobic such that corporations won’t pay them off…
So just enjoy the show!!! You have no say over anything that occurs anyway.. hopefully you won’t get too run over by the corrupt clownshow that is increasingly disasterous…

Just look at the picture above and you can see how carefully they were packed and guarded. Why that squished one on the bottom clearly contains the most sensitive information . Yikes.

And if you pay attention to the picture, you will see that the photo was taken at the White House and these are boxes that were packed and are being moved by White House staff.

Are all Republicans as dense as you? Wait. Don’t answer that. We know they are.

You got one thing right – they weren’t packed by Trump. By the way, more than likely GSA rather than White House are involved with the move. As far as the packing, that could be lower level White House but now we are speculating. You want it to be so bad that you can’t wait for the answer.

Already there is a quite good case against the FBI and DOJ for spoliation of evidence. Once they opened the boxes without benefit of Trump’s lawyers in attendance, the spoliation of evidence is obvious. Thus everything in the boxes becomes fruit of the poisonous tree and is not useable in a criminal or civil proceeding with the exception that Trump now has a major harassment claim against the FBI, DOJ and Biden administration.

Those are your dreams. I favor reality

While it is true that the President has ultimate classification/declassification authority, he cannot unilaterally wave a magic wand and declassify anything. There is a review process involving every agency that has interest in the classified document. Trump clearly did not follow that process.

Here’s the problem. Trump has spent his whole useless life avoiding the consequences of his actions. In the late 1980’s, he was $1 BILLION in debt. The banks were ready to foreclose, he blustered and blustered and got them to seize a few of his properties, extend some of his loans, agree to accept interest-only payments. The Dept of Justice is not the banks and his bluster will not work.

Stick to selling overpriced eyeglasses and leave the classified document discussion to those who know what they are talking about.

Keep that speculation going. It is all the lies you got.

Trump was not cooperating.

In June, Trump’s lawyer signed a statement that no more material was at Mar-A-Lago.

A source inside Trump World told DOJ that there were, in fact, a lot more boxes.

You really need to pay attention.

The smart money says this is all related to the RUSSIA HOAX so that they can protect those documents from being viewed by declaring them part of a criminal investigation.

Clearly this was timed to try and influence the 2022 mid terms!

All the answers to your questions will come out at trial…

So do you have a timeline when the FBI members will be arrested?

Yes, there will be no arrests as the FBI did nothing remotely illegal.

Apparently, there are now 14 fbi whistleblowers talking to Jim Jordan. Likely more will follow and many will resign. The treasonous left is going to pay a very steep price.

And the correct spelling of Jordan’s first name is “Gym”.

Hey, Virg. The GSA let’s a contract for moving. The current contract is with a black female owned businesswoman out of DC. She is a real entrepreneur.