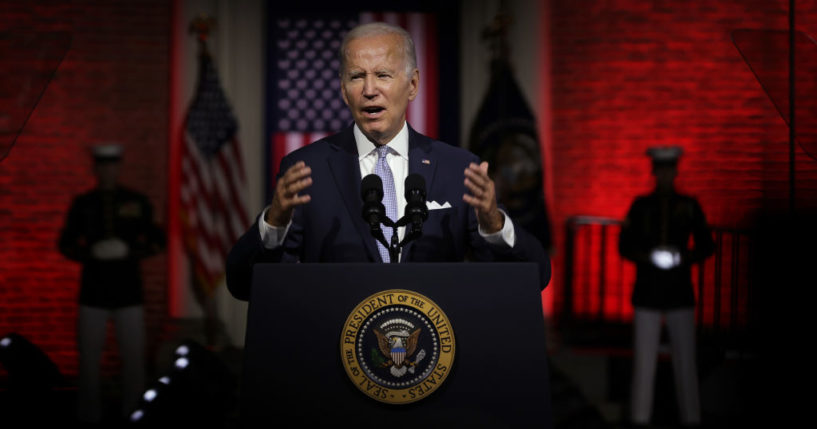 The Shame of a Nation

“And yet his words – not being his – are important. While he personally is unfit for office, those behind him who wrote the words are the true danger afoot in the land.”

It’s hard to know precisely what Mr. Biden was ranting about last night in Philadelphia or the results he intended to produce. There he was, framed in the doorway of our history, with two United States Marines in full dress uniform standing guard behind him. The nation’s flag was center-hung.

He shamed the nation, its heritage, its war dead, and the document produced not fifty yards away behind the doors he used as a campaign prop.

Whatever else he did, he clearly smeared and convicted half of the American population and those who disagreed with his radical political positions not simply as opponents – but as the “enemy,”  and all that implies.

Hatred oozed from his words. He stood as a sad shell of a man who should be in pajamas sipping hot chocolate but instead was parroting the most rancid, vile words ever delivered by a man who holds the Office of the President. In truth, he’s such an intellectually, spiritually, and ethically vacant man that he is unworthy of much ink.

And yet his words – not being his – are important. While he personally is unfit for office, those behind him who wrote the words are the true danger afoot in the land.

They are men and women of the radical left, many retreads from the Obama years, suffused in the language of violence and the processes of revolution. Merely replay the events of the summer of 2020 and the untold destruction, death, and loss of businesses that was unleashed by the radical left,  including a three-day siege of the White House. The irony’s weight is almost too much to hold.

To breach the public peace and unity with his words was breathtaking. The summer followed by the election of 2020 is merely a preface for the radical’s violence to come, unfortunately. The words spoken by a dementia-ravaged old man, whose best days never were, are to sense the unease and fear of the left – ordinary people are on to them.

Mr. Biden’s White House is incompetent to handle the economy, inflation, and spending, as average citizens come to terms with doing much more with less. Sweetheart deals and public funding are pouring into so-called green projects. At the same time, America’s own energy resources are being cut dramatically. They have abandoned even the military, not to mention American citizens, to terrorists. Our children are used for medical experiments with unalterable consequences – done with the moral certainty that small children can be something they are not based on whims of the moment. Our public government-run schools are failing upward at such a rate that they may not be salvageable. Average families are maligned and targeted by their government for wanting their children taught actual subjects in those failing schools. Crime waves have been set off by failing to allow law enforcement to carry out their duties. Murder is skyrocketing while marauding vagrants and carjackers are often not even punished if caught. The mask covering the face of tyranny in our justice and national police has been taken off. Behind it, average citizens can now see there is nothing protecting them from the vagaries of this new type of justice. The list of failures of this Administration goes on.

The radical left has always followed the rules Saul Alinsky laid out; project onto your political enemies that which you are actually doing. It’s time tested. Now facing an election that looks grim, the brains of this Administration have decided that stirring hatred and violence may be their only hope of engaging their troops to action, avoiding total disaster in November.  So, the Republican Party becomes the face of racism, fascism, anti-democratic, and pro-Russian. This list, too, is very long.

It takes no courage or skill to do what Mr. Biden and his minions did last night. History is littered with the drifters of chance who strong-arm their way to power and then cling to it by sacrificing whatever and whoever is available. But, Mr. Biden was unintentionally correct in one thing. The Republic of self-governing and free citizens is in jeopardy at this time and place. It is a moment of danger that carries a Biblical portent as well.

Americans must once more save their own posterity from those who would have them bend their knees in submission to the false idols of radical leftism.

The Shame of a Nation was last modified: September 2nd, 2022 by Michael Giere

Jesus, how much lying are you capable of? My God.

Lying? Do you not see the consequences when a President foments this kind of outrage against his OWN constituents at an OFFICIAL prime time address? Note — this was not a political rally! Tell me another president who used govt property and made an official presidential address where he attacked millions of Americans and labeled them terrorists and “enemies” of the state???????

What are the consequences when a president supports the overthrow of our entire government as happened on Jan. 6?

I wouldn’t vote for either Trump or Biden for dog catcher.

What are the consequences of a stolen election which is actually the overthrow of the American government.

Apparently I am the only one noticing that there are absolutely NO Democrats speaking up about making elections secure so that there is no question of their outcomes.

“Apparently I am the only one noticing that there are absolutely NO Democrats speaking up about making elections secure so that there is no question of their outcomes.”

There already is no question

Since that has never happened, we do not know. Aren’t you implying that Democrats were intelligent enough to steal a national election from “you”? Well, may you they were, but not me. Personally, one party is about as stupid and corrupt as the other in my opinion.

Until people realize neither party can save them, there will be no peace or resolution.

Your God is Baal. Don’t use Jesus’ name in vain, you mindless bot. You are nothing but an Alinsky convert willing to destroy the USA through hatred, lies, and theft. Won’t work. We’re on to you and yours.

Stolen elections have consequences. I have no faith in free and fair elections anymore. SCOTUS cemented the democrat fraudulent vote production process in place when they refused to hear PA or GA challenges. I am convinced that the necessary “votes” for both the house and senate candidates are already pre-printed, boxed and ready to be fed into the machines between 0300 and 0400 on 9 November. Just like they were the morning after the 2020 “election”. Congress will be in democrat hands from now on.

Sorry you feel that way. You are so wrong.

Well said. And quite appropriate. Biden is a shell of an individual into which the American hating left has poured all its venom.