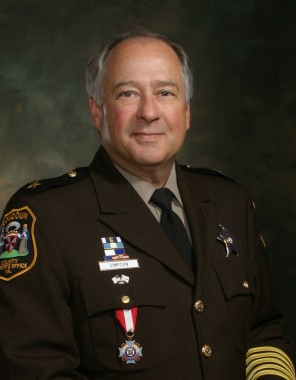 They’re IN! Scott York and Steve Simpson Running as Independents in Loudoun

Today in Loudoun County former Sheriff Steve Simpson and current Board of Supervisors Chairman Scott York announced their intentions to run as Independents in November. [read_more]

Scott York has been chairman since 1999, at times a Republican and other times an Independent.  We reported yesterday on the likely run by Scott York.  Today he made his announcement:

Leesburg — Incumbent Chairman Scott K. York is pleased to announce he will seek re-election as Chairman of the Board of Supervisors.

Chairman York stated, “The outpouring of recent request and support for me to reconsider and to seek re-election has been overwhelming. With the growth of Loudoun over the past fifteen years, current issues facing our County and outpouring of concern for the quality of leadership over the next four years, I am announcing my re-election campaign.”

Fifteen years ago York sought and won the chairmanship after serving as the Sterling District Supervisor for four years, dedicating his time and service to his local community while learning the issues, processes and intricacies from the inside as the Sterling Supervisor.

“The field of candidates is simply not qualified to lead the county in the capacity of Chair. I have taken a great deal of time to look at them. Allowing any of the current candidates to act in the capacity of Chair would be irresponsible to the citizens of Loudoun. Not one of them has even been or sought to be a district supervisor for their community and the chairmanship is simply not one which should be a training position,” York said.

Loudoun County continues to be ranked one of the top counties to live and work as well as one of the richest counties in America. From ensuring our bond rating remains high to establishing regional, national and world-wide partnerships and relationships, Loudoun deserves to continue on its path of success with the proper leadership.

Authorized by Friends of Scott York 4

Former Sheriff Stephen Simpson has also held office as both a Republican and an Independent.  Simpson spent 24 years in the Loudoun sheriff office, serving as Sheriff for 16 years. He issued the following statement today,

“This morning I filed petitions to run as an independent candidate for Sheriff of Loudoun County.

“Earlier this year I gave my support to Eric Noble, with whom I worked for two decades, and voted for him at the convention. Unfortunately, the effort to nominate him came up just short.  But the issues that caused me and so many others to become involved did not disappear with that convention.  So I am picking up the torch.

“There are personal reasons why I find it necessary to run.  The most important is that Loudoun County is where my wife and I are raising our family.  Our youngest daughter currently attends Woodgrove High School.

“In addition, I have a long history with the Loudoun County Sheriff’s Office, which was my home for 24 years – first as a deputy, then an investigator, a patrol sergeant and for sixteen years as the Sheriff.  I cannot watch what has been happening with this fine organization without stepping up and offering my services.

“In this campaign I will discuss a number of issues that need our immediate attention.  For example, the mismanagement of resources. In my sixteen years as sheriff, I never once went over budget, even in the leanest of years.  Sheriff Chapman overran his budget his first year to the tune of $3 million.  When confronted by the Board of Supervisors, he said he didn’t know anything about it and blamed his underlings, prompting one Supervisor to observe that Chapman was blaming everyone except himself.

“This year, of course, the Sheriff points out that he returned $4 million to the treasury.  What he doesn’t tell you is how.  The bulk of this “savings” was because he hasn’t filled the positions that were approved – money he couldn’t spend on anything else.

“And where are these vacancies?  They are primarily in the patrol and specialty divisions, positions his office has justified as the minimal needed to protect the County.  One need only look at what he has done to the gang and narcotics units.

“In 2011, then candidate Chapman promised a “Plan to aggressively combat the rise of gangs, drugs and illegal immigration here in Loudoun County with proactive, results oriented enforcement.”

“What did he actually do?  He disbanded the narcotics AND gang units and created a smaller “tactical enforcement unit.”  He then sent several of these deputies to work on task forces, not even doing cases in Loudoun County.  Additionally, at least five of those positions remain unfilled, leaving that unit greatly undermanned.  The result? Fewer investigators working actual cases.

“Deputies have reported to me that this lack of manpower (again, these are funded positions going unfilled) is resulting in increased gang activity and recruitment in the eastern part of the county and increased drug activity, including Meth, in the western part.  Even the Sheriff’s Office has published numbers showing a staggering increase in Heroin ODs and fatalities here in Loudoun County.

“Sheriff Chapman promised to be proactive.  He has been anything but.  It is time to renew our commitment to preserving the safety and security of our community with an emphasis on local law enforcement.”

They’re IN! Scott York and Steve Simpson Running as Independents in Loudoun was last modified: August 9th, 2015 by Jeanine Martin

FHLH Couldn’t agree more with the county seriously considering a PD. It’s a shame the deputies can’t actively participate in the political process without suffering the consequences, potential loss of job. I believe this is the main reason the public does not hear from those currently employed at the Sheriff’s Office.

It is time for the BoS to get serious about a PD and take out much of this political nonsense in law enforcement. I understand that there is politics in everything, but the county is too big now to have such influence on patrol strategies. I want accountability for a Sheriff that oversees those who are enforcing laws. There are too many upsides to a PD. 1. protections to officers.(if the Sheriff doesn’t like you personally then he/she can just not invite you back after an election) 2. accountability for the Sheriff. 3. Ownership on the BoS part. Once they have ownership then just maybe there would be better things obtained for law enforcement, there also would be no hiding behind each other because of the constitutional officer separation. 2. Ultimately there could be a national search for a highly qualified person to be Chief.
I would fully support a candidate who promised to push a PD for the county in a referendum and if passed, then work with a time frame and transition. Maybe, just maybe if done right the Sheriff could position themselves as the new Chief and a special election could be run for a Sheriff to oversee the jail, courts, and process service.

So I welcome the independent run by Simpson. Public safety is too important for it to be a closed door event or you have to have support by one party or the other. Chapman should welcome it as well, I would also not hold anything against Noble if he broke his word and did not “support” the Republican nominee and felt there was a bigger reason to jump in. Let me just put it this way, if Chapman had lost does anybody really believe he would not have run as an independent? I have to laugh when I think back to the debate and the question that was posed to him and his response. Priceless!

First of all, there is no “influx” of independents. That suggests new people on the field. These people are not new. They are alleged Republicans who use the party when it suits their election desires, and ditch it for the “independent” label when that seems better for them.
The answer is NOT to have conservatives become “more moderate socially.” They should stand by what they believe in. Why is it that “moderates” and liberals are always demanding that conservatives give up their beliefs and move more “to the center?” We keep hearing from these groups that we need centrist candidates to win. Ridiculous. McCain and Romney were just that. That didn’t work out so well. Furthermore, the ridiculous assertion that you can be truly fiscally conservative, while supporting socially liberal policies makes NO sense whatsoever. They are linked completely. How do we pay for your social programs? Taxes. Right.

The divide exhibited by an influx of independents will truly show GOP Chairman Mike Haynes the larger problems he has within his party.

Moderates will gravitate in droves towards these two known voices of calm who are virtually moderate republicans with known performance records as the republican extremist ranks begin crumbling.

It might be better to try to get the far right to be more moderate socially, while remaining more conservative fiscally, than trying to get the moderates to move out to the fringe with the far, far right.

Parties do not like independents, but voters do…no party strings.