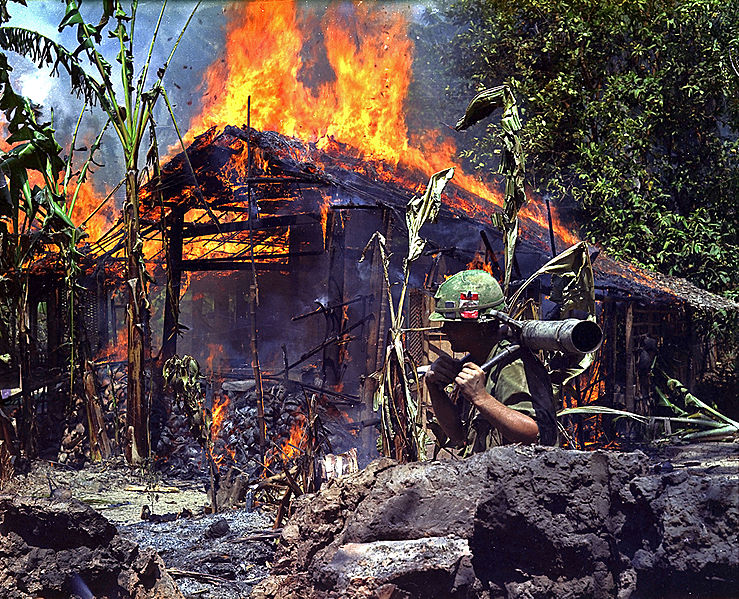 “We had to destroy the village in order to save it” was the infamous oxy-moron spoken by an anonymous American soldier during the Vietnam War. It must have made sense to him at the time, but pundits, politicians and reporters have mocked it, ever since, as a fitting slogan for a war that not many citizens thought was important enough to cost us the lives of 50,000 young men.

Today, we’re seeing a reprise of that silly phrase, as mobs roam across the nation’s great cities: smashing, looting, burning, hurting and even killing, while babbling young radicals assure us that all this is necessary to purge the unspeakable crime of “systemic racism,” which has infected America for over 400 years. The wholesale trashing of businesses and property is referred to as “unfortunate collateral damage,” in this noble campaign to remake the country by wrecking its economic and social structure, pulling down its historical monuments, destroying minority-owned businesses, and abolishing the “obscene tyranny” of organized policing. At this writing, it’s reported that shootings in Chicago over the past weekend have killed 18 people and wounded 47.

Reports have also emerged that prosecutors in several cities are dropping criminal charges for protesters arrested for rioting . In St. Louis, the District of Columbia, Philadelphia, and New York, felony charges against hundreds of people who were arrested for theft, vandalizing and arson have been dismissed. Many of those dismissals were issued by district attorneys whose elections were enabled by millions of dollars in campaign cash from left-wing activist George Soros. In New York, where a new bail-reform law has crippled judges’ power to keep violent offenders locked up, the criminal justice system is in an uproar. Police Benevolent Association President Pat Lynch has called the controversial law “asinine.”

In Minneapolis, where the original atrocity against George Floyd occurred, a proposal to eliminate the city’s police force and replace it with a “community-based public safety model” (i.e., a “bulldog with no teeth”) is supported by a majority of the City Council. Mayor Jacob Frey opposes the move, but insiders say a majority of the council supports it and will probably enact it over the mayor’s veto. “This council is going to dismantle this police department,” said Council Member Jeremiah Ellison. Representative Ilhan Omar (D-MN), whose congressional district includes Minneapolis, has also voiced support for the council members’ plan:

“No one is advocating for lawlessness. No one is advocating for our community to be in danger or crime to happen in Minneapolis without there being accountability. This is an opportunity for us to get rid of a system that was built not to provide safety and serve, and to start to put into place a system that does provide that safety.” (Translation: we have to destroy the police in order to save them…)

Wonder what the goodly citizens of Minneapolis think about all that? My guess is that many of them are packing up and planning to get the heck outta dodge before the crooks take over. And the rest will probably be heading for the gun stores, if any are still open.

Officials of other Democrat-controlled cities are rushing to board the “defunding” bandwagon. At this writing, New York City and Los Angeles are moving ahead with sizable cuts to police-budgets and transfer of the excised funds to minority interest groups. (Can you spell B-L-M?)

As of June 15, New York City has disbanded its entire 600-person plainclothes anti-crime unit, which had been charged with solving crimes and getting illegal weapons off the street. Insiders say some $1.5 billion will be cut from the NYPD budget. On June 22, however, NYPD officials reported that shootings in the city had soared by 358%, compared to the same time period in 2019. (Sounds like real progress.)

All over the country it seems like cities and states are being “run” (using the term loosely) by people who are several packs of fries short of a Happy Meal. What kind of mayor or governor lets rioters run free to loot, burn, and take over sections of a city with no pushback from law enforcement? And “defunding” the police? Is Mayor de Blasio channeling Sonny Corleone?

What’s going on here? Is it all a “protest” about “systemic racism?” And are African-Americans really on board with it?

Race-hustlers, like Al Sharpton, and the Black Live Matter fascisti welcome the rioting because they gain in importance and make money from it. (In Mafia-speak it’s called “protection.”) On a nationally aired TV program, former Congressman Allen West said: “I think it’s very important that we stop having these corporations, to the tune of over $460 million, being extorted to support organizations such as Black Lives Matter, who really do not care about those issues addressing the black community.”

On the same program, well-known civil rights attorney Leo Terrell proclaimed: “There is no systemic racism today!” He called it a “false narrative,” and denounced Democrats’ outrageous failure to call out the rioters who are destroying the lives and livelihoods of the very people they claim to be helping.

Democratic city and state officials who countenance the violence and destruction of property are evidently letting it continue because they believe it advances their political goal of hurting Donald Trump so he will lose the election. But other minority politicians are disquieted by Democrats’ obsession with getting rid of Donald Trump. After hearing reports that U. S. employment has improved by record-breaking numbers, despite the Corona-lockdowns, Georgia State legislator Vernon Jones asked:

“Why has my party become so anti-Trump that they’ve become pro-nothing? Why are they so actively rooting for America’s failure? Our unemployment rate is on the decline. This is something to celebrate, not diminish. Thank you, Donald Trump. I’m a Georgia state representative and lifelong Democrat. But in this election year I’ll be casting my vote for Trump. I didn’t leave the Democratic Party. The Party left me.”

“President Donald J. Trump has a solid record of achievements in the black community. His leadership and successful legislative agenda have done more to improve black lives and their communities than any other president since the Civil Rights and Voters’ Rights Act.”

Katrina Pierson, a Tea Party activist and consultant to the Trump campaign, observed:

“President Trump has rapidly enacted criminal justice reform, increased funding for historically black colleges and universities, and delivered record economic growth for African-Americans. Black voters are beginning to realize that the Democratic Party has never prioritized their interests. I am confident that there will be historic African-American support for President Trump in November.”

These few minority-voices of moderation and sanity are almost drowned out by the media-amplified roar of rioters and haters who are throwing in the kitchen sink in an all-out blitz to defeat Donald Trump. “Give us what we want, or we’ll burn it all down,” cried one hysterical protestor who might have been channeling that long-ago soldier in Vietnam.

Will this violent movement succeed? Will rioters convince voters that only Good Old Joe Biden – a.k.a. “Basement Bubba” – can restore normalcy and save the country? Maybe, but I doubt it. A verse from the new Biden Anthem1 seems to sum it up nicely:

I sing of Joe Biden, I’ll tell of his fame…
All over the country they’re chanting his name.
Joe Biden! Joe Biden! We hope that you’ll stay
Holed up in your basement for e’er and a day.

Throwing in the Kitchen Sink was last modified: July 2nd, 2020 by Woody Zimmerman