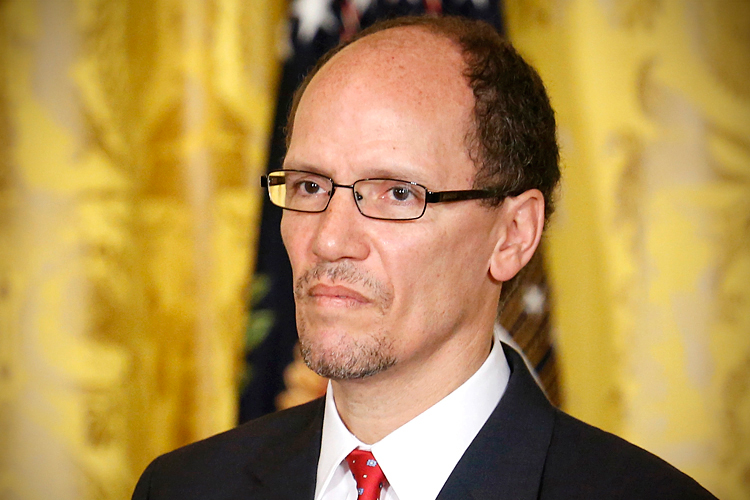 Democrats have elected their first Hispanic to chair their party, Obama’s Labor Secretary Tom Perez. This was a blow to the very liberal wing of the party who was lobbying for Keith Ellison. From the Washington Post,

“With hard work and a hell of a lot of organizing, we will turn this party around,” said Perez, his voice hoarse after a week that took him to 10 states, locking up the final votes he needed from the 447-member DNC.

“We’ve got to come out of here hand in hand, brothers and sisters, because Trump is right outside of that door,” said Ellison before the final vote, which came on a second ballot.

Perez wants to focus on support from small donors and online fundraising. His goal is:

“low-dollar contributions from everyday Americans [to] account for 33 percent of revenue.”

More on the story and the voting here and here.

The DNC is now lead by an individual who doesn’t believe in the constitutional rule of law and a deputy who believes in the sanctity of sharia law. Neither one of them is an American.

I’m offended at the sexist terms like brothers and sisters, there are way more than just two genders, right?

Or does this solve transgender potties? Simply labeling Bro and Sis. Or just one marked ‘Comrade?’

‘Unfortunately’? …. what does that mean?

‘it is unfortunate that’

Honey boo boo …. we are asking …. if it was un-fortunate, what would have been fortunate? and why?

Any of your yahoos help Republicans, the weirdest helps the most. I’m happy with the guy who helped Hillary cheat out Bernie.

Too bad we didn’t get Ellison as the face of their party. That would have been a big help.

Ellison was appointed as deputy chair. So who will run the mess is still up for constant discussion as Perez the Obama-ite nextgen progressive DNC chair will be assisted by Bernie Sander’s (and Louis Farrakhan’s) recommended choice Ellison. But no big deal as the real opposition party will still remain in place and set primarily in the House and Senate Republican majorities.

Did they demand picture ID before voting? LOL

Yes, they did. But about 15% of the vote came from illegal aliens who had to be provide ID at the last second.

If you’re an illegal alien and a superdelegate, does your vote count twice?