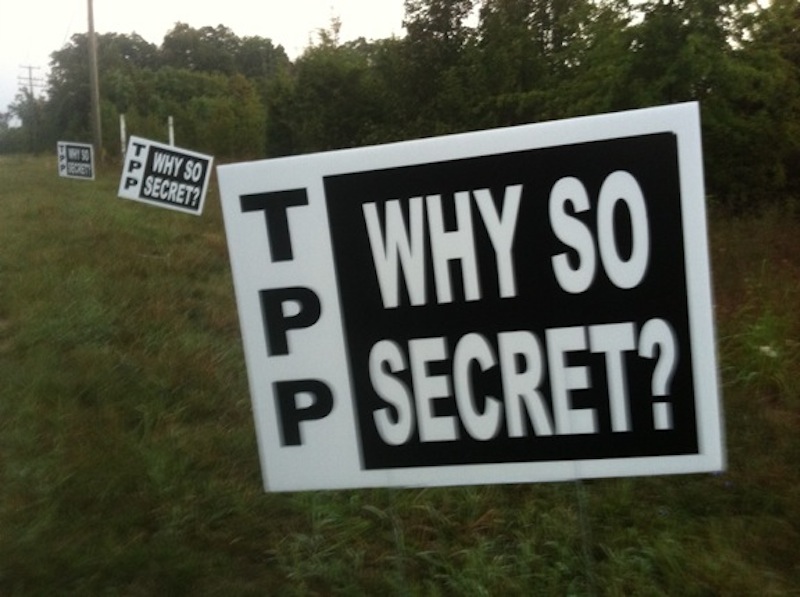 We have very little “free trade” even though we have plenty of free trade agreements.[read_more]

A massive piece of potentially disastrous legislation – the exact consequences of which we can only guess at – is poised to be passed, unread and hidden from public scrutiny by those un-American Democrats.

Whoops, no, that’s not quite right. It is actually Republicans who want to do this.

Yep, the same party that rightly excoriated the Democratic Congress in 2009 for ramming through the unread, largely undebated Obamacare legislation, can’t wait to be handmaidens to the “ruling elite” and pass their own unread, and largely undebated nightmare.

This “disaster-waiting-to-happen” is called the Trans-Pacific Partnership (TPP). It is a massive “trade” deal between twelve Pacific Rim counties from Vietnam to Canada and points in between. This week the House will try to join the Senate in granting the President “fast track” authority to present the TPP to Congress for an “up or down” vote without the ability to amend the agreement. (Quaint old-world politics introduced by Richard Nixon, bless his little heart.)

Well, to be accurate, we don’t even know exactly how “massive” it is, because we can’t see it – we can’t read it. Literally. It’s off limits to citizens – sorry about that – you’re evidently too stupid to understand it all anyway.

Members of Congress can see it – but only if they navigate down to a basement room in the Capitol Building and read it – no notes or audio devices are allowed. This isn’t a joke, honest. At last report, only a handful of Senators have taken the initiative to actually read it. How many in the House? We don’t know. Evidently not many, but no one will say. (Has your Congressman even read it?)

Now, to be honest, the TPP really isn’t about “trade” either, but you’re not supposed to know that. We do know that only five of its twenty nine draft chapter’s concern trade. The rest of the document is an intricate construction of regulations, corporate rights and the transfer of national sovereignty that covers almost every aspect of economic life you can imagine between the twelve countries (and Europe is next); investment banking and retail banking, food regulations, farming regulations, livestock importations, drug regulation, internet regulation, and the list goes on and on. It may raise other issues also. There are rumored to be extremely serious questions about free speech, copyrights and even the potential for Second Amendment issues in the TPP. But, we really don’t know. We’re guessing here. We can’t read it. And in all likelihood, your Congressman or Senator knows no more than you do.

According to Senator Jeff Sessions, R-AL (one of the few Senators who have read it in the basement), there will be tribunals of bureaucrats that will adjudicate TPP disputes, not U.S. courts. We already know how this works, as the same mechanism is used by both NAFTA and the World Trade Organization (WTO). This allows huge transnational corporations – that have no national allegiance – to exercise more power and more say in the ongoing “ground level” economics of member nations, than will the individuals or governments of those nations (including suing national governments for lost potential, yet unearned, earnings and overturning health, safety, labeling and environmental standards).

So, in summary, it seems we have a partial media and Congressional blackout of the most far reaching economic trade pact since the WTO in 1995. There are huge implications in what little we do know, that could directly affect the economic and intellectual property rights of every American; but we can’t ask a lot of questions because we don’t know what we don’t know, and evidently significant numbers of our legislators haven’t read it so they can’t answer our questions either.

One other thing that should be pretty obvious by now is that we have very little “free trade” even though we have plenty of free trade agreements. The dirty little secret is that we have a lot of politicians who throw around the term “free trade” – but the phrase itself has no meaning whatsoever. (Similar to the word “conservative;” a word without a definition now).

Rational people would define “free trade” broadly as the free exchange, with reciprocal tariffs, of each other’s goods and services; with equal access to the marketplace.

America has been duped to put it charitably.

What really has been happening since the 1990’s is that the huge American marketplace has been the most open in the world, while our “partners” manipulate currencies, subsidize industries, enforce consumption taxes or value added taxes, and erect various schemes to discourage American businesses from opening or participating in their economies.

The consequences of these one-sided trade practices are straightforward enough, reflected in significant generational declines in income and net worth of the average American, $12 trillion dollars of trade deficits since the 1990s (March 2015 was one of the highest monthly trade imbalances seen in the last decade at $51.4 billion dollars), and persistent underemployment and unemployment during the last eight years.

The most important question about “free trade” today should not be whom can we sign an agreement with; rather it should be what is best for the well-being of the United States and American worker, and for future generations of Americans?

For those of us who actually believe in “free trade” and the benefits of trade, this week and next could be a pivotal point for the TPP. If you don’t know where your own Congressman stands on the TPP and fast track authority, you should call their office and ask two specific questions; have they even read the pact, and do they support it enough to make sure that the American people have a chance to read it as well?

We all pretty much at this point in time clearly understand who Barack Obama is and what he stands for this is another wakeup call for the politically comatose on exactly what the Republican Party has become, vested by the American people with a governing majority and morphed under Mitch McConnell and John Boehner into this corporatist, big government mess. As Obama’s Senate and House supporters move away from many of his positions the Republicans rush in the fill the void in the name of a “bipartisanship” that really means the sell out of the American people. If this is passed you can expect “climate change” dictates to start to flying out of the WH. Mr. Giere is correct this process is only tangentially about international trade.