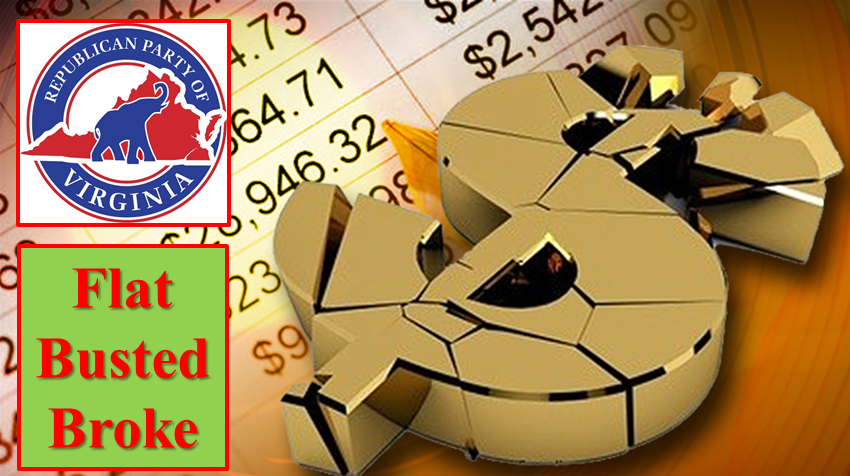 “Trust.” There are few words in the English language that are more important, or more vital to the interactions between human beings and within human organizations.

That’s why emerging and continuing perceptions about the state of fiscal affairs at the Republican Party of Virginia (RPV) are disturbing—and further erode the trust in our state party by Virginia Republicans.

For weeks, I and many of you have heard persistent talk that RPV has “insufficient monetary reserves” to underwrite the cost of the 2020 RPV State Convention, where we will elect a new RPV Chair and our National Committeeman and National Committeewoman.

“Insufficient monetary reserves.” As in broke.

Talk of our dismal financial situation has seeped into the consciousness of our rank-and-file grassroots members. I know because I have fielded phone calls and emails over the last several weeks from Republicans across Virginia. And dozens of our fellow Republicans shared these same concerns with me on Saturday, June 20th, at both the 10th and 11th Congressional District Republican Conventions. Dozens.

Details are sketchy and I therefore won’t make specific allegations, but people on our RPV State Central Committee and across Virginia tell me that insufficient monetary reserves exist in RPV financial accounts to underwrite the roughly $100,000 cost of conducting an assembled in-person RPV State Convention.

This is devastating to the vital work before us in selecting party leadership for the next four years, transacting essential state party business, renewing and solidifying working and human relationships between hardworking Republican activists across our state, and imbuing our members with the essential energy to return home and reelect President Trump, reelect our three incumbent members of the U.S. House of Representatives, and elect our newly-nominated candidates for the U.S. Senate and House.

The RPV State Convention is crucial, vital, and essential to the success of our party, and it appears that we will now be denied the ability to meet and confer as free and independent citizens of our Constitutional Republic, where we possess God-given rights and freedoms that are guaranteed by the U.S. and Virginia Constitutions.

In recent months, some 2,500-3,000 Virginia Republicans have been certified as unit delegates to the RPV State Convention and each has paid $35.00 to underwrite convention costs. As a result, between $87,500 and $105,000 has been or will be donated to our state party by grassroots Republican delegates to the RPV State Convention. On top of that, multiple donors have made large donations in the form of convention sponsorships.

In the absence of transparency or explanation from RPV, a broad perception now exists that dedicated convention monies have been diverted to other uses, instead of being fenced, protected, and used solely for the purpose intended by donors. And so, our state party again finds itself in dire fiscal straits.

History is instructive. During the 2019 election cycle in which the Virginia House of Delegates and Senate of Virginia flipped to Democrat control and triggered destructive policy outcome for our Commonwealth, the Democrat Party of Virginia (DPVA) raised $10 million. In contrast, RPV raised $6 million, an insufficient and non-competitive amount that resulted in massive losses at the polls. During the first three-months of 2020 (January 1-March 31), the disparity between both parties is staggering and inexcusable.

Many Virginia Republicans have lost trust, faith, and confidence in our state party, and I am deeply disappointed at the significant dysfunction that prevails and has made RPV the brunt of disdain by members of both parties and by newspaper, magazine, television, radio, blog, website, and social media outlets.

Rather than focus on the problem, I have resolved to focus on the fix. As such, I will take these specific actions to remedy our present fiscal calamity if elected as RPV Chair later this year, based on my 30 years of service as a senior military officer managing hundreds of millions of dollars in monetary and other assets:

To be responsive to Virginia Republicans, I must first be reachable. To keep up with our campaign for RPV Chair:

If I am elected as RPV Chair, I will make leadership and management decisions—whether fiscal or in any other area of RPV operations—on the basis of one overriding principle:

It’s about trust…it’s about fighting and winning again.