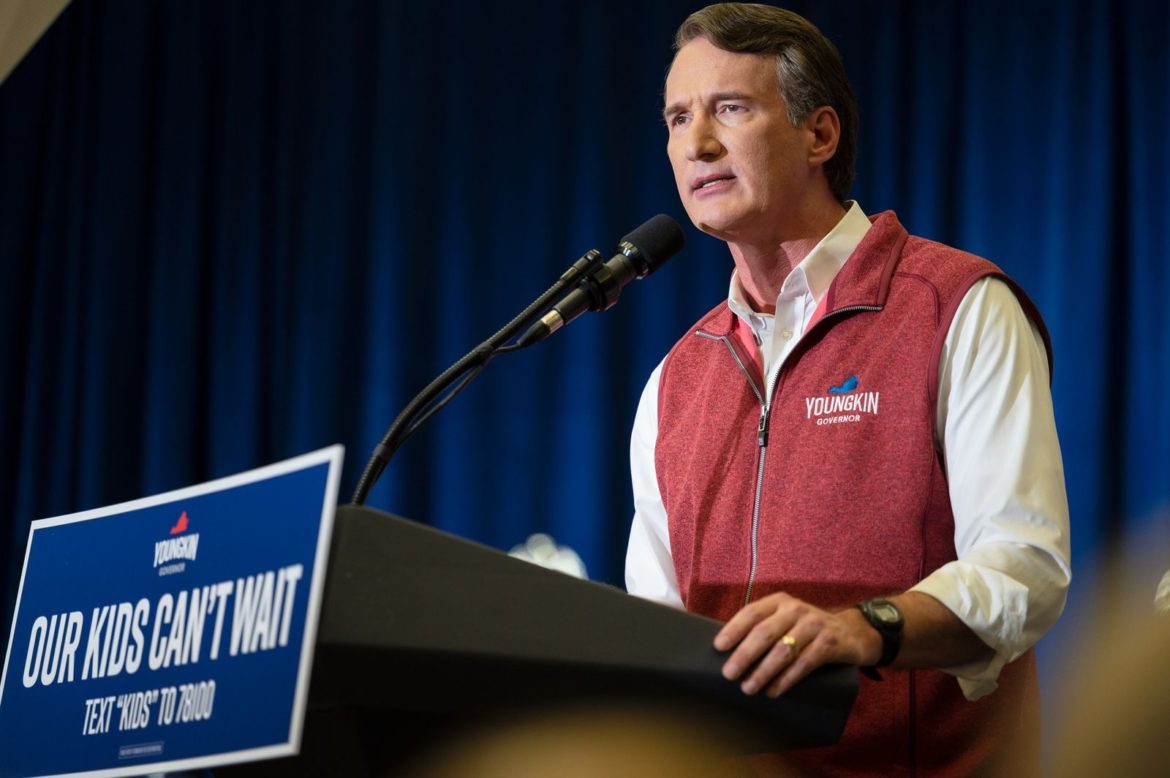 According to a Monmouth poll of 1,005 voters, Terry McAuliffe and Glenn Youngkin are tied at 46%.

>>>The biggest swing in support from Monmouth’s last poll comes from independent voters, registering a 48% to 39% lead for Youngkin now compared with a 37% to 46% deficit in September. Youngkin has also cut into McAuliffe’s advantage with women voters. The Democrat currently has a narrow edge among women (47% to 43%), down from a sizable 14-point lead last month (52% to 38%).

Youngkin has increased his support in the reddest part of the commonwealth, western Virginia, where he currently leads McAuliffe by 66% to 27% (up from 58% to 34% in September). At the same time, McAuliffe has slipped slightly in heavily-blue Northern Virginia. He leads there by 58% to 34%. This is down only slightly from his 58% to 29% lead last month, however, incumbent Democratic Gov. Ralph Northam won this key region by 35 points (67% to 32%) in 2017. McAuliffe holds small leads in both the eastern Tidewater (48% to 42%) and central I-95/Richmond (48% to 41%) areas.

“Suburban women, especially in Northern Virginia, have been crucial to the sizable victories Democrats have enjoyed in the commonwealth since 2017. However, their support is not registering at the same level this time around. This is due partly to a shift in key issues important to these voters and partly to dampened enthusiasm among the party faithful,” said Patrick Murray, director of the independent Monmouth University Polling Institute.<<<

Education and schools are a growing issue for voters. Youngkin has made it his top priority. Last night he announced he would launch an investigation into Loudoun Public Schools coverup of rape and sexual assaults by the same student in the bathroom at two different high schools. LCPS is not keeping our kids safe. In his first day in office as Governor, Youngkin will begin the investigation of the crimes and coverup.

Issues of importance to Virginia voters:

Trends and enthusiasm are clearly with Republicans.

“You need to ask better questions”
That comment is from a smug individual who with absolutely no intention or grace to serve at the pleasure of the people of Virginia, yes it was none other than Democrat Terry McAuliffe.

The trend is our friend.

Gee… Youngkin is underperforming Gillespie at the same date on the same poll…. not good…

Look at the internals, we’ve definitely got the big MO on our side. Sorry Eric, but we’re moving ahead in every category of voters.

You don’t have such a great track record on your predictions in this blog, Jeanine. This is just another one. Btw, you said Ed had the big MO in 2017 as well.

No Eric.. this should not be close. OK… you should leave the state for Philly if Terry McRat doesn’t win by at least nine points… our loss!!! Take that useful idiot Martin with you… you guys will LOVE Philly…
A shithole Democrap city where a woman got raped on a subway train by an illegal alien and people video it instead of helping…
Your kind of place!

Joe Biden is sinking faster than the Titanic. But, with only Trump lurking, could Biden ever sink low enough for it to really matter? Biden is a total disaster thus far.

I’ll be voting for Winsome Sears, the premium Republican on the ticket. It will take proof that Youngkin is not a Catholic just like McAuliffe for me to vote for him. Sending ones children to the $60,000 +, Jesuit Georgetown Prep tells me all I need to know.

Right now, I am planning on voting only for Sears. Nobody else. If she wins the Lt. Gov. this year, she may be able to win the governors race in 2025.

I don’t know Jeanine… I don’t think we people in the red part of the state can outvote the cesspool who make their living off of the gumment… You and Fairfux are the richest counties in the whole stupid country thanks to fed spending.. Terry McRat is connected to the party that makes money rain on you there…. like I tell your friend Eric… that money doesn’t make it to Southwest Va… But I’m sure Eric lives in a McMansion.. They will get the vote out there…

The Virginia Fraud machine will fix this election like it did the last one! Fairfax refuses to allow the public to see their drop box for ballots so you can bet it will be stuffed for Comrade Terry!

what a stupid thing to say………..and yet you say it

What a useful idiot you are Martin… Media Matters should get better trolls… you suck.

you are an off the rails moron

Fairfax always drags its feet with election night reporting so they can “find” the votes they need to overcome the difference.

It will be Richmond and Tiedwater doing that….

There plain fact, despite the communists fraud machinery, is that from the Northern suburbs out towards Leesburg and down the eastern side of the state through Tidewater, there are more democrat voters that then entire rest of the state combined. Without a doubt there will be a sharp increase in the number of votes for McAullife and his merry band off traitors sometime between 0300 and 0400 on 3 November, same as in the “election” of 2020. The pre-printed ballots will be fed through the machines until it’s a “landslide”. The Communists (democrats) will then claim a mandate to finish turning the once free state of Virginia into the second soviet socialist state in the US, California being the first. Expect John D Martin and Eric Halftroll to come on with “told you so’s” later that day.

Now, the Director of Fairfax County’s Office of Elections, Scott Konopasek, wants to flout the law. Apparently, he has suspended the legal requirement that an absentee ballot application includes the last four digits of the voter’s Social Security number. Poof! Like magic, that legal requirement disappeared when Mr. Konopasek decided to go ahead and process applications that were missing those digits. According to Konopasek in a public meeting Thursday afternoon, the office already has processed some 500+ applications that were missing the legally required Social Security information. That means those applicants are going to receive absentee ballots.

You have to remember that the human calling him her or it self, John D. Martin, is a paid democrat troll. He is on the Soros team sowing discord and confusion on web sites such as these. The easiest way to deal with him is, don’t. I don’t respond to his droppings. Eric the half Troill, on the other hand. occasionally comes up with logical coherent posts.