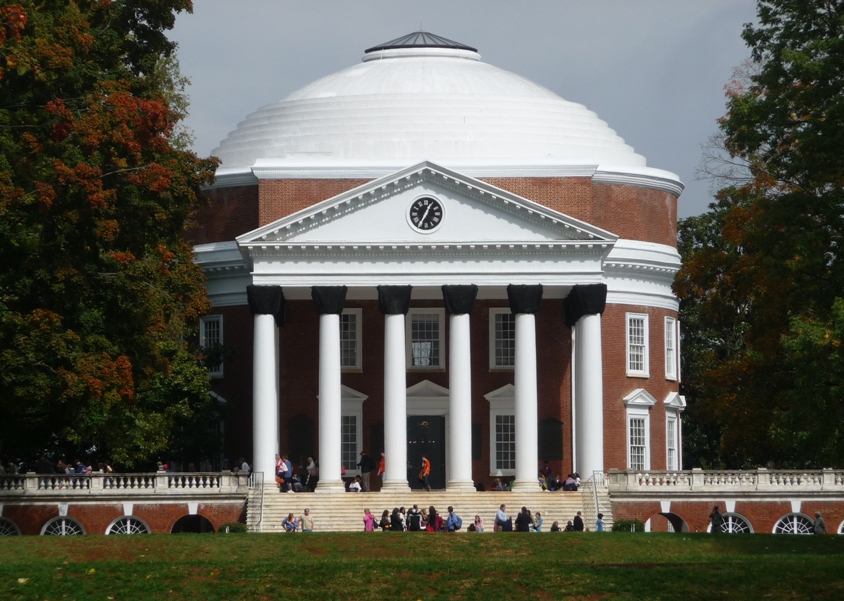 In an email to students on November 9th from University of Virginia President Teresa Sullivan students were encouraged to unite after the election:

Thomas Jefferson wrote to a friend that University of Virginia students â€˜are not of ordinary significance only: they are exactly the persons who are to succeed to the government of our country, and to rule its future enmities, its friendships and fortunes,â€™â€ Sullivan said in the email. â€œI encourage todayâ€™s U.Va. students to embrace that responsibility.â€

Thomas Jefferson, a Founding Father of our country, was also the founder of UVA. In 1819 Jefferson designed and built the university to be his vision of an ‘academical village”. Â On the campus Jefferson has always been respected and spoken of in almost reverential terms.

Not anymore. Â Like many southern planters, Thomas Jefferson owned slaves. This greatly offends modern day special snowflake students and their professors. Â A letter was signed by 469 of these snowflakes and sent to President Sullivan:

We would like for our administration to understand that although some members of this community may have come to this university because of Thomas Jefferson’s legacy, others of us came here in spite of it,â€ the letter read. â€œFor many of us, the inclusion of Jefferson quotations in these e-mails undermines the message of unity, equality and civility that you are attempting to convey.â€

â€œI drafted the e-mail because when Jefferson was referenced in emails related to the election, it communicated to me a message of exclusion,â€

I think that Jefferson is often celebrated for his accomplishments with little or no acknowledgment of the atrocities he committed against hundreds of human beings. This is a complex issue but members of our community are intelligent and compassionate enough to be able to wrestle with this history and decide how we want to move forward as an institution that welcomes all.â€

President Sullivan responded to the letter:

â€œI fully endorse their right to speak out on issues that matter to all of us, including the Universityâ€™s complicated Jeffersonian legacy,â€ Sullivan said in a statement. â€œWe remain true to our values and united in our respect for one another even as we engage in vigorous debate.â€

â€œQuoting Jefferson (or any historical figure) does not imply an endorsement of all the social structures and beliefs of his time,â€

“Jefferson could not have anticipated the diversity of leaders the University would produce. All of them belong at todayâ€™s U.Va., whose founderâ€™s most influential and most quoted words were â€˜…all men are created equal,â€™â€™ she said. â€œThose words were inherently contradictory in an era of slavery, but because of their power, they became the fundamental expression of a more genuine equality today.â€

One would think studentsÂ and Professors at UVA would have enough knowledge of history to understand the times in which Thomas Jefferson designed and built their beloved University. Apparently not. Their precious feelings are offended by any mention of Thomas Jefferson. Perhaps those students should have thought of that before they decided to attend Jefferson’s Academical Village.

They should quit and form their own university. I would call if university of liberal Virginians. I wonder who they would quote?

One must come to the same conclusion that I came to over a decade ago about the Left. There is no appeasement, and there is no placation. They will never be satisfied until every vestige of traditionalism is expunged from our nation. No one twisted any arms of a single faculty member to teach there. If they don’t like Thomas Jefferson, then leave.

Meanwhile lame-duck Barry is off touring the world on our tax money… Riots in Athens over his visit.

I’d be inclined to respond, “If you came here in spite of Thomas Jefferson, you have probably selected this University for the wrong reasons and I encourage you to look elsewhere at your earliest opportunity.”

That’s a damn broad brush to paint with, wow. You’ve 469 signatures from a population of what, 20kish total(?)and you ascribe the thoughts of the 469 as representing the thoughts and pulse of the student body and staff?

A rare occurrance when I hope you are right.

Enough. Just fire the damn professors and be done with it.

I can’t imagine the petitiotions that must be going around Trump University.

I used to be proud of this state. Not anymore. Tell them they are welcome to leave tax-payer funded UVA and go wherever they want (maybe Va Tech). I’d love to think that the administration will tell them to go blow, but with UVA, that will probably not happen.

It won’t happen. The administration will bend over backwards to appease them.

No-no-no, don’t send those folks down to VT. My alma mater is already too liberal as it is.

And its only going to get worse since they made that feckless weenie from UC-Berkeley the president.