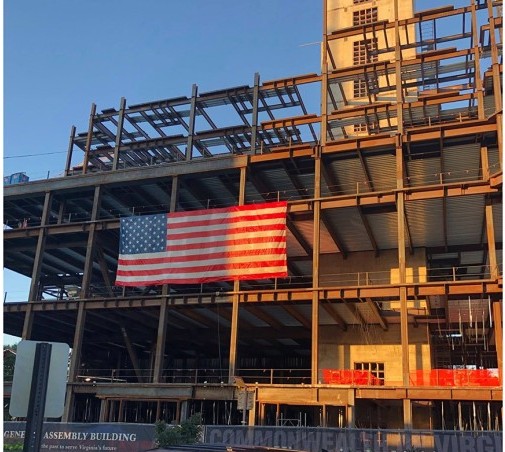 Virginia ordered an American flag taken down at a state office building, reports the Washington Post:

Construction workers erecting a new office building for Virginia lawmakers unfurled an enormous American flag on the structure this week, just in time for the Fourth of July. But hours after the flag went up, state officials ordered it removed, calling the banner a “safety risk” and potential “target” for demonstrators.

Protesters have taken to the city’s streets – including the Capitol Square corner where the 15-story future General Assembly building is rising…While largely peaceful, the marches have turned violent at times, with protesters tearing down tall metal fencing at that corner and injuring Capitol Police with bottles and other objects.

“Over the past month we’ve seen buildings and structures around Capitol Square vandalized and flags, dumpsters, a bus and other items set ablaze during demonstrations around the city,” Dena Potter, spokeswoman for the Department of General Services, said in an email Friday. “When we saw the flag, we were concerned that it could become a target so we told the contractor to remove it.”

On the Fourth of July, a man burnt an American flag in the parking lot of a Wal-Mart in York County, Virginia. The same day, The Hill reports that “protesters burned an American flag near the White House” and “chanted, ‘America was never great.'” Last month, protesters in Richmond pulled down a statue of Christopher Columbus and draped it with a burning flag.

BLM protesters tore down the statue of Ulysses S. Grant in San Francisco on Juneteenth. Grant is the general who did the most to defeat the Confederacy in the Civil War. Later, as President, he appointed black people and Native Americans to office and tried to protect blacks against racist violence in the South, even though keeping troops in the South to protect blacks was costly and unpopular in the North. Grant’s contributions to black freedom were so great that he was celebrated by the black abolitionist Frederick Douglass. “To him, more than to any other man, the Negro owes his enfranchisement,” Douglass said. Douglass eulogized Grant as “a man too broad for prejudice, too humane to despise the humblest, too great to be small at any point. In him the Negro found a protector, the Indian a friend, a vanquished foe a brother, an imperiled nation a savior.”

The reason for tearing down his statue was that he once briefly owned a slave that he had been given, before voluntarily freeing that slave.

Grant’s statue was not alone in being torn down. As Newsweek notes, “The statues of St. Junipero Serra, the first saint of the Roman Catholic Church to be canonized in the U.S., and Francis Scott Key, the author of the lyrics to ‘The Star-Spangled Banner,’ were also torn down at the park on the same day.”

Police in that left-leaning city allowed it to happen: “Nearly 400 protesters were reported at the scene around 8:30 p.m. local time, according to police, who did not engage with the demonstrators. No arrests were made, NBC Bay Area reported.”

By contrast, BLM protesters have left alone statues of Soviet Communist dictator Lenin, who relied on slave labor and forced labor on a vast scale. There are statues of Lenin in Las Vegas, Atlantic City, New York City, Los Angeles, and Seattle.

As The New Yorker notes:

[Lenin’s 1918] Resolution on Red Terror provided for the “safeguarding of the Soviet Republic from class enemies by means of isolating them in concentration camps.” The idea was to separate, suppress, or destroy “categories of individuals” — priests, landowners, and other “enemies of the Revolution” — and to begin creating a pool of slave labor. Construction began in 1919. By the end of 1920, Soviet Russia had eighty-four camps, with around fifty thousand prisoners; within three years, the number of camps had quadrupled.”

Yet Black Lives Matter protesters are busy defacing or toppling statues of people who made America a more just and equal place. One example is Revolutionary war hero Tadeusz Kościuszko. His will dedicated his property to finance the emancipation or education of black people. Yet his statue was spat and urinated on and spray-painted with the words “F*ck You” and “BLM.”