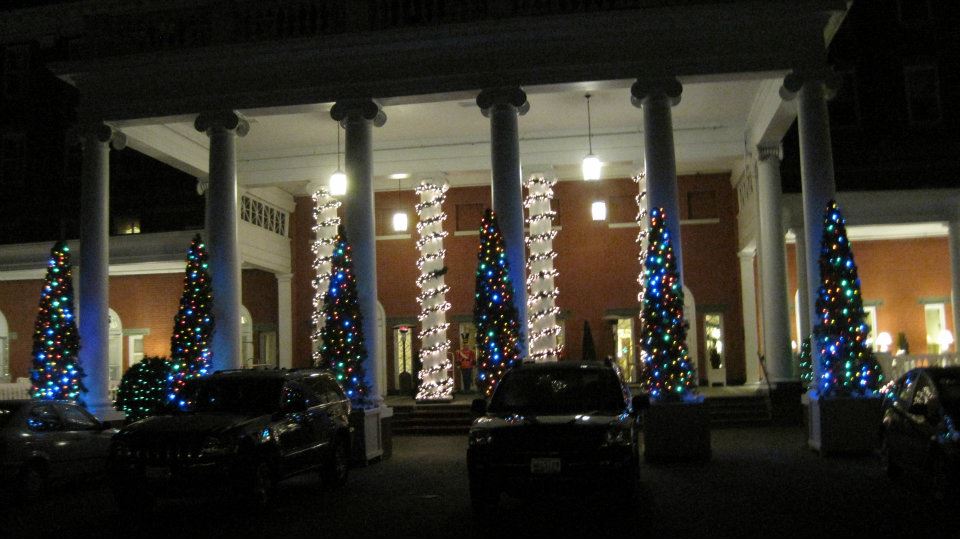 The Homestead Resort decorated for Christmas

Republicans never retreat, we only Advance, hence the name of our annual weekend at the Homestead resort in Hot Springs Virginia in the Allegheny mountains. This year over 400 of the party faithful gathered from across the commonwealth to attend the event with many more who were turned away, all tickets were sold out by the day after election day. We had much to celebrate and we did! It was a joyous weekend!

All three of the statewide winning Republicans attended, along with our 4 Congressmen (soon to be 7 according to Governor-elect Youngkin), and numerous delegates, including the incoming Speaker of the House, Todd Gilbert.

On Friday night Hospitality Suites were open for partying with swag handed out at many of them in addition to food and drink. Youngkin’s PAC “Virginia Wins” suite was packed with people wanting to congratulate the new Governor-Elect. His PAC was giving away his now-famous red fleece vests, red cups with his name, and beer cozies. Axiom Strategies, Youngkin’s excellent campaign advisors, offered party-goers quite a spread including lobster mac-n-cheese, an ice sculpture with the number 74 (Youngkin will be the 74th Virginia Governor), and a martini luge. The “74” swag included phone chargers and Christmas ornaments. Delegate Nick Freitas’s (R-Culpeper) suite had him debating some fun topics, such as “who was the most masculine, John Wayne or Sean Connery”? Nick wowed the crowd with his excellent debating skills.

Former Governor Bob McDonnell attended the festivities, joining a panel discussion on how to build coalitions. He said he was very happy to be passing on the title of “Virginia’s last Republican Governor”.

All day Saturday the Arrangements committee hosted excellent breakout sessions, with panels of Congressmen, delegates, Axiom Strategies, and Attorney-General elect Jason Miyares, among many others. The Arrangements Committee, chaired by David Bartholomew of Virginia Beach, organized the weekend activities and couldn’t have done a better job, everything ran on time and smooth as silk. Kudos to them and their excellent planning and organizing skills.

I was at the first one, in the old Ingleside hotel near Staunton in 1985, and attended often into the 90s. Always more fun the year after a victory. As to the location, it was a potent symbol of the original Mountain-Valley roots of the Virginia GOP, and if the thought is those roots have moved to Occupied Beltway Virginia, I suggest a closer look at the results this year is in order. 🙂

The Republicans are likely moving to NOVA to increase their numbers in that locality. Why not, as they already own the valley. People in the mountains are going to vote Republican come hell or high water. A good move, outside the mental capacity of the Republicans of the past. NOVA is certainly nothing but a corruption based shxt hole, but a shxt hole needed to win state wide.

It’s not a victory until Republicans prove they can maintain the ground they gained. I say they cannot. I hope they prove me wrong. I say they do not really care.

So, moving from RoVa’s high headed hillbilly hideaway to NoVa’s bastion of Beltway bandits. Yeah, that should go over well with voters in the sticks.

No one has moved anywhere. They spent two nights with the party faithful.

Jeanine, it was great to say hello, but too much of a whirlwind for a good chat. Thank you for your columns on so many critical matters, but especially the Sunday Funnies…we all needed some laughs this year!!! Merry Christmas