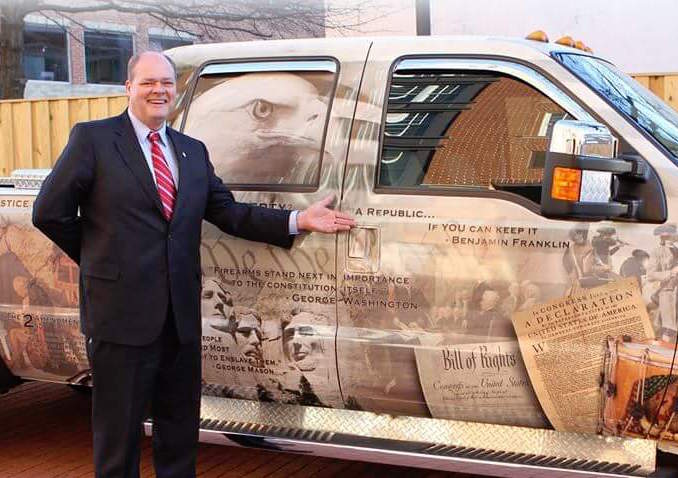 Vote for Accountability, Integrity and Transparency at the 7th District GOP Convention

My name is Ron Hedlund and I am motivated to run for one of the three at-large seats for the SCC from the Seventh District. I have lived in Henrico County for over 20 years since I moved from Alleghany County, where I was the chairman of the local GOP committee. I helped George Allen get nominated and to eventually become our Governor.

I moved to Richmond to work in the Allen administration. Subsequent to that, Governor Gilmore appointed me Executive Director of the Virginia Business Education Partnership. From there I moved to the State Council of Higher Education for Virginia as the Chief of Staff to the Director.

I was involved in the Richmond political arena to varying degrees before eventually moving back into private industry 15 years ago and dropping off the partisan bandwagon. I am a self-employed small businessman who two years ago found himself volunteering for Dave Brat during his historic primary challenge and upset of House Majority Leader Eric Cantor. Life has never been the same since. What changed my life in politics was not simply Dave Brat and the Brat Pack, though.

During the Brat/Cantor primary race, I was introduced to the Center for Self-Governance (CSG) of Murfreesboro, TN and a series of day-long training classes. â€œCSG trains you to rediscover, own and preserve your civic authority, and gives hands-on instruction in building habits and skill set practice to exercise your authority to keep your Republic.â€

I realized, after ascending through all five levels of activism and training, that our Republic is dependent upon the effective and learned engagement of citizens every day of the year, not just on election day. You and I have pretty much abdicated our civic authority and as a result, our elected officials, including party leaders, have lost touch with the Founding principles upon which our Republic depends.

Transparency, integrity and accountability have lost their priority and no longer motivate our federal, state and local governing officials to the degree one would hope. Even our own SCC has strayed from these principles and, I dare say, even from our own Republican Creed. Let me offer one glaring example.

Last year, the SCC passed a highly controversial pledge of party loyalty that would require one to agree to, in writing, before being allowed to vote in the recent March 1 Presidential primary.

Regardless of your position, either in support of, or in opposition to, this highly controversial idea, there was much discussion had, and the SCC vote was divided last year when it eventually passed. But, it should also be noted, the SCC even went so far as to vote to have the controversial deciding vote cast by secret ballot. The majority of the SCC was ashamed to let the RPV membership know how they were going to vote. Why are your representatives afraid to let you know how they voted? What are they hiding from you?

The entire time I, and others, fought to repeal the party pledge, RPV Chairman John Whitbeck was a staunch defender of the pledge and ABSOLUTELY REFUSED to entertain even the thought or idea of further debating the merits of the pledge before the SCC. I was told it was too late, the State Board of Elections already had moved forward with the process. Unit chairmen in other parts of the state were told the same. No debate, no discussion…PERIOD!!!!

Now contrast that to what occurred earlier this year. On January 15, Vince Haley filed paperwork and paid $2500 to challenge Whitbeck after writing an op-ed attacking the party pledge. Mind you, this Breitbart piece was published AFTER Whitbeck declared it was too late to rescind the party pledge.

Susan Lascolette and I attended the January 30 meeting of the SCC at RPV headquarters. Nothing appeared on the agenda related to the party pledge. No public announcement was made at any time during the meeting as I recall. During the meeting, it was announced SCC would go into executive session and all guests were required to leave the room immediately.

Several of us went downstairs and waited over an hour. After reentering the meeting room, no announcement was made as to the nature of the executive session. The first order of business upon reconvening was a motion to rescind the party pledge. The motion was seconded and NO DISCUSSION WHATSOEVER took place before a UNANIMOUS vote was cast to repeal the pledge. Unanimous voteâ€¦. No discussion…Hugely controversial issue! What is going on here folks?

During the next break, Chairman Whitbeck came over to me and whispered in my ear. â€œYou can call your dogs off now.â€ What exactly just went on, I found myself asking. Months later, it was inadvertently revealed by RPV Executive Director, John Findlay, that the discussion over the repeal of the party pledge took place in the private, members only, executive session of the SCC. Why is our party conducting the peopleâ€™s business in complete secrecy? Is the SCC working simply to save one manâ€™s Chairmanship? What are they hiding?

I am blessed to be running for SCC with two pillars of freedom and liberty. Susan Lascolette is the first woman to serve as Chairman of the Board of Supervisors from Goochland County, and Dewey McDonnell is a GOP leader from Culpeper County. Together, we have been campaign volunteers and activists for citizen involvement in self-governance. Of particular note, all three of us were original supporters and groundpounders for Dave Brat in his historic primary challenge against Eric Cantor.

We are the grassroots conservative ticket running for SCC in the Seventh District. We are running on a platform of transparency, integrity and accountability. We believe self-governance works best when â€œwe the peopleâ€ are effectively engaged and actively participate in the process. Our founding principles call for more citizen legislators and fewer paid, professional consultants running our governing bodies.

Susan Lascolette, Dewey McDonnell and I are mutually pledged to represent the Republicans of the Seventh District. That includes new Republican voters, even if they are not pledged to the party apparatus. How can we ask voters to pledge their loyalty to our party when it is our own party that has broken promise after promise to our conservative base?

As Republicans, we owe the voters of Virginia an apology for not holding our own Republican elected officials accountable to our own Republican Creed. Our SCC opponents in the Seventh will tell you that our job as party officials is simply to get more Republicans elected. We could not disagree more! Our job as elected party officials is to represent our conservative base and hold elected officials ACCOUNTABLE to our Republican Creed. Our job is to ensure the RPV is effectively and efficiently run. This is NOT the case now. Now that you know what we believe, our job is before us: let us tell you why we are spending an incredible amount of time, treasure and talent to seek such an obscure, unpaid party position.

The SCC, for those not part of the inside baseball politico crowd, is the governing body of the RPV. Over 80 persons serve on the SCC and pretty much serve as a Board of Directors functions for many other organized bodies. Every Congressional district elects 3 representatives to each serve a four year term. As mentioned earlier, these are completely volunteer positions, with no expenses paid, and the body meets roughly four times a year in various locations across the state.

All three of us are deeply concerned over the path our Republic is on. We have devoted an incredible amount of effort, as have many others in the Seventh, to right the ship and engage citizens in the process of self-governance. Congressman Dave Brat has been a wonderful example of an elected official who stays in touch with his constituents and keeps us informed, while actively seeking our input with an unprecedented number of town hall meetings across the district.

As SCC members, we would also be responsible for serving on the Seventh District Committee. Historically, this committee makeup has been hostile to Congressman Brat. Our opponents have not had a history of supporting our new Congressman, and include one who has even tried to primary Dave out of his seat. The three of us are pledged to support Dave Brat and his efforts to represent you in the district. We even pledge to hold Dave Brat accountable to our Republican Creed. Certainly, that will be an easy job!

Ladies and gentlemen of the Seventh, the â€œTrue Conservative Ticketâ€ humbly asks for your support, May 21 at the District Convention at the Richmond Convention Center. Registration opens at 8:30 am and the convention begins at 10:00 am. Please vote for accountability, integrity and transparency. Please vote for Susan Lascolette, Dewey McDonnell and Ron Hedlund for State Central Committee. Thank you.

Vote for Accountability, Integrity and Transparency at the 7th District GOP Convention was last modified: May 16th, 2016 by TBE Staff

Hell no. You have a bad tendency to become a jerk who gets combative when things don’t go your way. Despite your good intentions, the RPV doesn’t need a hothead like you on their governing body.

And it really doesn’t help if temperament and behavior prevents your guy from electoral success.

We elected a good grassroots ticket a couple days ago in the 5th. And when you good guys of the 7th get elected also, I’m looking forward to a lot more #transparency and #accountability in our state party!!

No more SCC dirty deeds done in the darkness of secrecy.

Why is it again that elected representatives choose a secret ballot for a non-sensitive matter?