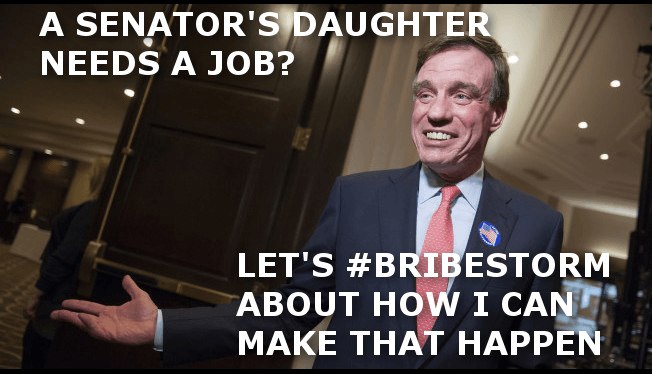 For those late to the story, recall that back in June Virginia state Senator Phil Puckett (D-Russell) resigned to clear the way for his daughter to get past the anti-nepotism rules in the Senate and get a state level judicial appointment. That appointment never happened after the firestorm of controversy erupted over his apparently having also been enticed with a job offer on the state tobacco commission to free up a new seat for a Republican senator.

But one thing that did happen was revealed last week, when the Washington Post reported that in an effort to keep Puckett in the Virginia Senate (and thereby keep that body in Democratic control), Sen. Mark Warner called Puckett’s son to offer an appointment to the federal bench for his sister—if only his dad, Sen. Puckett, would stay put. Apparently this came too late, as Puckett had already made his final decision to resign.

Ed Gillespie rightly brought this up at last night’s debate, as such an issue casts serious doubts about the Senator’s judgment and ethics. This is the Senator who, after all, parlayed his $18,000/year job as a Democratic Party functionary into a $100 million fortune based on connections to power brokers willing and able to game the system.

So how did Warner respond? He said he was just “brainstorming” about ways to help Puckett. You know, just tossing out some ideas, something like, “If I get your sister this prestigious lifetime job on the taxpayer dime, do you think your dad would continue to serve in the Senate? Maybe I can get her another job, if the federal judiciary isn’t her schtick. Just let me know how I can help, ya know, because as the senior U.S. Senator from Virginia, I get a lot of leeway from the president about who gets those jobs.”

That’s not brainstorming. It’s bribestorming…thinking up creative ways to use one’s power and influence to purchase influence (with taxpayer dollars) over a sitting legislator.

Ed Gillespie had the best line of the debate last night when he observed that “Mark Warner likes to describe himself as a problem solver. Ask yourself, what problems have been solved?”

The answer is none. None at all, which is why Warner kept trying to change the subject to stuff that happened over a decade ago instead of during his last, disastrous term in the Senate.

But Warner certainly displayed a talent for creating a problem for his own re-election.

[…] left now for Gillespie and his allies to knock Warner out with with a few strong right hooks: the Warner #BRIBESTORM, the 97% sycophancy, and “We can’t afford six more years of the last six years.” […]

[…] Mark Warner), the Gillespie campaign has released a hard-hitting new ad about Mark Warner’s involvement in the #BRIBESTORM scandal where he offered a federal judgeship for Sen. Phil Puckett’s daughter in exchange for […]

I haven’t really followed this to closely but I see in comments and even in media print this sometimes referred to as seeking a state and other times seeking a federal judgeship for the daughter in question. Does anyone know what was the actual position under discussion? Obviously if this was a state position then it has a lot more grounded sense of reality then a federal position where all Warner could have provided was a recommendation to the Congressional confirmation process prior to Obama’s signature.

Warner’s offer was to see about a federal judgeship. which is a big deal. Correct me if i’m wrong, but only the US Senate votes on fed judges. & Mark Warner’s recommendation to Obama would almost certainly cinch her nomination. In the General Assembly, the issue was a state judgeship for Puckett’s daughter. the full GA votes for confirmation in that instance.

There has been a long standing tradition for recommending district judges called “senatorial courtesy”. Senators from a state in which a vacancy occurs actually make the decision. Typically, a senator of the same political party as the President sends a nomination to the president, who almost always follows the recommendation but this has NOT been used during the contentious Congressional years of the Obama administration as far as I am aware. Therefore, she would have been required to undergo a full Senate confirmation per the Constitutional parameters for the judicial process regarding nominations. Given the circumstances surrounding this she had little chance of seeing any confirmation success in my opinion but a state judgeship that is an entirely different can of worms.

No, it wouldn’t. There are very few judgeships in the Western District of Virginia. Four, to be exact. Backwoods lawyers don’t get nominations to the Federal bench. The President would never consider her for a nomination.

One thing you are all conveniently overlooking is that any phone call or offer made by any Democrat, was made in response to the offer already made by a Republican. Had the offer that the Republican made already been accepted?

Now, if as you say Sen. Warner offered a Federal judge position to Puckett’s daughter, then why didn’t Puckett accept? Did Puckett do as anybody else would, and accept the highest legitimate bid for a service? Or did he accept the only bid? The Republican bid?

My point is, any move by the Democrats was in response to the Republican’s slimy maneuver in the first place. Now the Republican media is trying to do what they do best, flip the issue and blame it on the other side.

Without the Republican slime this apparent “auction” never would have happened.

There is no way in my opinion based on media reports, that anybody could have gotten her confirmed as a Federal judge. The media has indicated she is just not qualified.

My vote has little to do with Ed or Mark. I am not putting the Republican’s of the Bush 43′ admin in charge again. NO. I learned my lesson the first time.

Warner is a Crapitlist : A liberal who makes millions swiping our tax dollars to benefit himself and just think he has plenty of company .

If Warner wants to go back a decade or so Gillespie should oblige him. Here is “Honest Abe” Warner in his campaign for governor back in 2001.

Did he keep his emphatically stated promise to not raise taxes?

Isn’t modern recording technology wonderful ? Mark Warner is as big a modern day liar as they come putting him in the same category as more than a few other Presidential and would be presidential personalities we “love” so well. Do you remember when he repeatedly claimed as a candidate for governor and then Senator that he (unlike Mark Early or George Allen ) “had a plan” not to raise taxes and once elected then voted to not only raise them deceive us about what was the actual fiscal situation of the Commonwealth and nation when he was governor and our U.S. Senator from Virginia? But his campaign lies are no more or less hypocritical than the plethora of other lies I have heard from nearly everyone of our Presidents over my lifetime if not the whole history of the nation as well. Think about it. President Obama claimed “You can keep your health insurance plan if you want to”; would be-Clinton2 screamed “What difference does it make?”;Bush2 (“Hussein has WMDs” and “mission accomplished” (even though I will at least allow that the actual mission he was talking about could have been just flying and landing his fighter jet on the aircraft carrier and not just removing Hussein from power or having to engage in “nation building” after he was captured and stated that he did not believe in it); Clinton1(“I have not had sex with that woman”);Bush1 (“Read my lips…”); Nixon (I am not a crook”). Sorry but for now I cannot recall or include any other lies I may have also heard from the lips of Reagan, Carter, Kennedy, or Eisenhower but perhaps anyone of my friends who reads this might be able to so….

and yet, many will vote for him instead of any republican running. How does that make you feel?