Washington DC, Second Most Liberal City in the US

While most of us know that San Francisco, home to Nancy Pelosi, is the most liberal city in the nation, but who would have guessed that Washington DC is number two, ahead of Boston, Seattle, and Portland?  That’s what Chris Warshaw of MIT and Chris Tausanovitch from the University of California found when they analyzed seven large studies.  On the other end of the scale, Mesa AZ is the most conservative city in the country followed by Oklahoma City OK, Virginia Beach VA, and Colorado Springs CO.

Chart of the most conservative to the most liberal US cities: 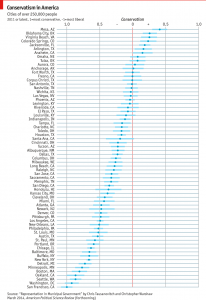 Washington DC, Second Most Liberal City in the US was last modified: August 4th, 2014 by Jeanine Martin

The good news is VA Beach is the 3rd most Conservative!

Indeed. What a surprise and most welcome news! Guess it’s all the military presence there.