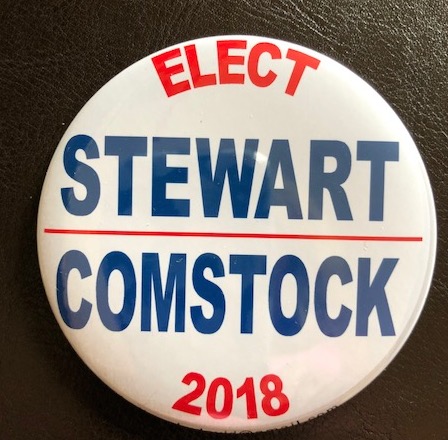 I have known Corey Stewart, chairman of the Prince William County Board of Supervisors, since 2007 when as a freshman Town Councilmember in Leesburg, I emailed his office about his illegal immigration plan to see if it had some benefit for my town and county â€“ which unfortunately, due to politics, did not adopt any facets of it.

When I became a Loudoun supervisor in 2012, I got to know Corey better and liked him so much that I backed him for Lt. Governor in 2013. Â I worked with him closely in the Virginia for Trump effort in 2016 and did not flinch in backing him for governor (in 2016).

All that changed when he injected himself into the Charlottesville monument dispute in February 2017 and when he was photographed (unwittingly, I believe) with a number of alt.right white supremacists. Â Being Jewish and not liking these alt.right Nazi KKK kooks at all, it was sickening to me to see the direction he was taking in his campaign. So, I did not vote for Stewart for Governor in the June 2017 primary, or in the U.S. Senate primary June 12.

I will not dwell on the many â€œmistakesâ€ I think Stewart made in various campaigns, but will say that itâ€™s necessary to move forward and not look backward. Â I think we need to stop the handwringing, fearmongering and Monday-morning quarterbacking and work with him and all GOP nominees to ensure President Trump and the national Republicans keep a majority in Congress come January Â 2019.

That being said, I think the Stewart campaign has to do some outreach and game plan changes in order to come close to beating Kaine and prevent House candidates from losing. Â Here are my suggestions:

If Stewart manages to be competitive with Kaine in the polls, then the RNC Senate campaign may help him with aid but at this point, he is not getting any of their moneyÂ and his chances of victory are nil. Â The reality is that even if EW Jackson or Nick Freitas won the nomination, they would be facing Tim Kaineâ€™s $13 million war chest and an uphill battle. Â Â

Our failure to unite will mean we will be finger pointing again this Nov. 7 in Virginia and making calls for John Whitbeck and John Finley to resign from RPV. Â Â However, the No 1 â€œgiftâ€ we can give to the President is a GOP House. Failure to secure the House after 2018 means the potential for the Country to be embroiled on impeachment hearings and a slowing of the Trump agenda.

As the old saying goes, â€œItâ€™s time for all good people to come to the aid of their party,â€ but Corey Stewart must do his part, too.

I have no doubt that a 60 Minutes producer will be given â€œevidenceâ€ like a disciplinary letter, or a faked birth certificate closer to the election… itâ€™s what dems do, in October.

Only 3 house seats? Not 4, or 2? Is that because Corey will turn out less voters or that his political â€˜cootiesâ€™ will stick to other Republicans?

Iâ€™m actually not sorry that the party collectively put your political wisdom in the â€˜nopeâ€™ pile as they really donâ€™t seem tired of winning.

Your feelings, visions, â€˜predictions,â€™ wishes, and self-fulfilling prophecies do not matter one whit in this contest

No, it was not clear, it was a fogged up inference as you still do with your implied: â€œetc.â€

Do all my selfies with celebrities make them â€˜associatedâ€™ with â€˜the beacon of truth, light, and clear political thought?â€™

Weâ€™re not stupid and painting Corey this way just makes you look silly.

Heâ€™s condemned/disavowed/shunned the stupids (not knowing their future behaviors) for their actions.

But he did say nice things about the guy who ran against Paul Ryan at the Trump inaugural before Nehlenâ€™s hating ways were known.

However Corey is still labelled the Great Satan who will destroy the party and any chance of anyone on the ticket. So letâ€™s burn the witch â€” so much easier than competing against the left and democrat party operations.

I did not know that â€” please point me in that direction, I thought Corey condemned when breitbart did.

Now is the time for all good men to come to the aid of the party.
ATTRIBUTION: Author unknown. Sentence devised to test the speed of the first typewriter, Milwaukee, Wisconsin, fall of 1867, during â€œan exciting political campaign.â€â€”Charles E. Weller, The Early History of the Typewriter, p. 21 (1918).

Other sources credit Weller as author of the famous sentence, but he does not claim the credit in his book. The sentence is still in use, though it is often written as â€œtheirâ€ party.